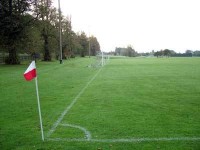 Many football pitches up and down the country may well now be near to or reaching field capacity due to the heavy rain we have been experiencing. Pore spaces, particularly in soil dominate pitches, will be filled with water (saturated). Playing on saturated pitches will certainly result in surface damage. Soils, when saturated, lose their stability and strength. The action of players running, stopping, sliding and turning in studded/bladed boots will result in surface damage. The severity of the damage will be dependant upon the soil type and the ability of the top 100mm to drain quickly.

To help keep the top 100mm free draining a programme of surface aeration is necessary. This is achieved by regular spiking with solid/slit tines to a depth of 150mm or more when conditions allow. There are other specialist machines that can help with improving surface drainage, for example the Blec Ground breaker and the versatile vertidrain machines that are now available. Frequency will be dependant on resources available, money/labour etc. Most league clubs will be aerating on a fortnight/monthly basis varying the depth of aeration.

Top dressing with an approved sportsfield sand, sand/ soil (70/30) dressings will certainly improve/restore surface drainage characteristics of your pitch. Ideally, an annual dressing of between 60-100 tonnes of material should be used, preferably applied in the spring, however, light dressings of sand can still be applied in November during favorable conditions.

While temperatures remain moderately high for the time of the year, at between 10-12 degrees C, grass growth will be stimulated. There is still time to apply some late autumn/winter fertilisers, something like a 4:0:10 or even a longer slow release 11:0:33 N P K product that will see the grass through the winter period.

Diseases can still be prevalent in November, due to the cool wet ground conditions, and particularly with heavy dews on the playing surfaces. It is important that groundstaff remove these dews to prevent disease attack. Many stadium clubs are experiencing outbreaks of leaf spot and some red thread. A dose of approved chemical fungicide will help control and prevent the spread of these diseases.

A wetting agent is sometimes used with the fungicide to help ensure it penetrates deep enough down into the soil profile.

Worm activity inevitability leads to worm casts appearing on the playing surface. These worm casts can be very problematic, casts tend to smear the surface, which in turn can affect surface water drainage capacity as well as providing a seed bed for weed germination.