A Siberian start to the month, and who knows after that!

March is normally the month when the higher temperatures kick the grass plant back into life; but this forecast cold spell will put a halt to that. Hopefully, the Siberian weather won't be with us for too long, so you can carry out the following maintenance work once temperatures are more suitable.

With mowing, keep your height of cut as near as possible to the high end of a winter cutting height. This will ensure the grass has the optimum leaf area for the production of carbon (the building blocks of plant growth) through the process of photosynthesis.

Continue the work of brushing to keep the air circulating around the base of the plant, particularly important for removing early morning dew and controlling disease. Pay particular attention also to the goalmouth areas and centre circles post match to lift the grass back up out of muddy areas. This is also important in keeping surface levels.

Divoting is important work and should be completed after each match. Arm yourself with a border fork and a bucket of topdressing with a little seed mixed in. Just a couple of hours post match divoting, sorting out some of the worst, will make all the difference. If you cannot afford a full divoting programme, then you could just tackle the worst and clean the rest off with a mower or pick up sweeper.

Continue spiking, when the conditions are right. Keep your spiking regime flexible, alternating between surface spiking, deep spiking and slitting. Hand fork goalmouth and centre circle areas if difficult to get onto with machinery.

Keep you lines looking bright by overmarking before each match, and string them when you start to see them wander. Giving some thought and taking some time with a string line helps give a better impression of a groundsman's skills, particularly as this is one of the visible aspects of what we do.

If you are planning to carry out your renovations earlier in April, then you might want to think about reducing the height of your grass over the next few weeks. Not only will this ensure your emergent grass sowing will not have to compete for light amongst taller established grasses, it also means that you will not need to be on the grass with heavy machinery whilst it is trying to establish.

If you have irrigation reels or equipment, it is wise to look over them and check that they are working ok and complete any service requirements, if they are needed.

Try and ensure all matches are completed in time for your renovation window.

Remember – the more that club members, players and officials understand what you role involves, the better. You could use any spare time to provide a members newsletter/blog detailing what problems you are experiencing (training regimes, waterlogging etc.) and to seek additional help as required.

At the time of writing, the fast moving current of air which races high above us, known as the jet stream, is sitting lower than would be expected. As a result, the British Isles lie above its path rather than their typical position above. Consequently, this allows cold arctic air to move in from the north and east, bringing with it low temperatures. The meteorologists estimate that this pattern of weather is likely to extend into the middle of March.

Despite all the modern methods we are able to employ to regulate grass plant growth, the one thing we cannot control is the temperature. This means then tricky times for turf managers who would have been hoping for warmer air to raise soil temperatures and, in turn, stimulate recovery growth after the long winter. The good news, of course, is that disease pressure is likely to be low.

Managers across all disciplines will be under pressure when it comes to members and players expectation of Spring. Forcing growth in such conditions, however, is simply not feasible nor sensible. The plant and soil biology know what they need and no amount of fertiliser will force them to respond when they are not ready and warm enough.

The onset of colder weather is, of course, often accompanied by sunshine, which will provide two benefits on areas which receive direct sunlight.

Firstly, photosynthesis and, secondly, localised warming. Plants will use the combination of solar energy and localised warming from the sunlight to produce sugars and start metabolic function. However, the problem with cool air at this time of the year is two fold:

The result is patchy and inconsistent growth. A useful analogy is to think of it rather like a cyclist trying to get up to sprinting speed as quickly as possible, when every tenth rotation of the pedals his foot slips off.

In relation to inputs, it is a time to concentrate on maximising the windows when the plant and soil biology is active, as well as assisting the plant to withstand desiccation and drought from cold winds. The means to do that is with little and often liquid or soluble applications aimed at the leaf, with the intention of maximising rapid uptake and assimilation. Tools to achieve in this outcome are:

Nitrate nitrogen – research shows it is absorbed into the leaf over 48 hours where it then resides in the spaces between cells ready and waiting to be assimilated when the plant requests it.

Humic Substances – in particular, micronised formulations containing a percentage of Fulvic Acid which acts to pull fertilisers into the plant more efficiently.

Micro nutrients – anyone looking to make informed decisions on their soil health will have had a full chemical analysis undertaken. Foliar applications of deficient nutrients in the tank mix will allow you to overcome a lack of supply of the soil, and provide the plant with everything it needs to maximise those concentrated blocks of light energy and warmth.

Two other important factors with regards to nutrition in a cold dry spring are:

Patience – understand what the plant needs and when; don’t be tempted to plough in nutrient that cannot be consumed. It will either leach into water courses or sit, slowly degrading, forcing a disease susceptible and mower demanding flush when conditions turn warm and wet.

Preparation – get a conventional release Ammonium sulphate based granular fertiliser on the shelf, ready to go down as soon as you see and hear the forecasters confidently predicting a consistent upturn in temperatures and available moisture. Preferably one containing a little calcium for cell division and magnesium for chlorophyll production.

March is an excellent time to treat moss; however, beware too much sulphate of iron if desiccating winds are prevalent, and most certainly hold back scarifying until strong consistent grass growth is there to repair the sward.

As areas dry out from the winter, getting on the ground with machinery and aerating will be possible. Little and often in multiple different ways is a good mantra, but beware desiccating winds leading to too much drying of the surface; especially on poa annua dominated swards

March is the time to start applying polymer wetting agents, such that you have enough time for the chemistry to build up in the soil ahead of summer. Prevention is absolutely better than cure when it comes to dry patch, and planning and preparation now prevents poor surfaces later in the year.

March is a good time to prevent the effects from type two fair rings in the summer. A combination of aeration, surfactants and azoxystrobin fungicide will allow water and active ingredient to move into hydrophobic regions occupied by the fungal mycelium.

Start thinking about your end of season renovations, and how you may be tackling the possibility of an extended season and the need to get onto the pitches to carry out the work. Start to build your strategy and get it down on paper. Look at what resources you will need - manpower, materials and machinery.

With reference to your machinery needs; if it's part of your inventory, drag it out, dust it off and fire it up to make sure it will work for you when you need it. If you don't have it in your inventory, but you know someone who has, a neighbouring club or school perhaps, particularly if you are on good terms with them; you may come to some arrangement to borrow it when they are not using it.

Alternatively, look at the option of hiring. There are a growing number of hire companies these days that are now specialising in the hire of sports ground equipment. With reference to your material needs, get them ordered now so that they are on hand when you need them.

You are now able to obtain the basic knowledge of how to maintain a football pitch ONLINE: 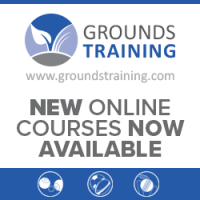 Like our one day course, it is designed to provide a basic knowledge of rugby and football pitch maintenance. The course enables the Groundsman to grasp the basic needs of a winter sports surface throughout a 12 month period. As an online version, it means you can learn at your own pace and at home. The Course Manual is included as part of the online course.Included in the Course Manual, there are working diaries showing the range of tasks needed to be accomplished each month. The Course Manual is available for purchase separately.

If preferred, we are able to arrange courses to be delivered on site to groups of 6 – 10 people. Email Carol Smith for information.

Other training courses available include:

On the Pitchcare website, there are a number of articles/features on pitch maintenance and end of season renovations.