Good growing conditions which allowed turf to recover from summer drought stress, continued last month and to the delight of both turf managers and golfers.

This recovery, following varying amounts of renovation work to greens, tees and even fairways, has helped to restore plant health; this an essential requirement heading into Autumn and Winter. Healthy turf is better able to withstand any disease attack. Winter wear and any cold temperature stress that the coming months may have in store.

The cold end to September brought an early reminder that the risk of early morning frosts are just around the corner, with courses in the northern half of the UK already experiencing a distinct taste of Autumn. October however, is often characterised by mild or even warm day time temperatures but cold nights, sometimes accompanied by ground frosts, which can bring any recent late growth to a sudden halt.

A number of recent Octobers have been very wet, with well above average rainfall recorded in 2004, 2005 & 2006. Although last year's rainfall was near normal, much of the country's total is still well down on what would be expected, therefore a wet October will be strong possibility.

From a golfing perspective, the start of the month is often very good but as daylight steadily reduces, even a mid afternoon tee time becomes too late for a full round to be completed.

The main competition season usually ends on the first weekend of the month and that generally signifies the start of end of season renovation work if it has not been completed earlier.

As the level of night time dampness increases and temperatures fall, there is an increasing risk from disease attack and for the remainder of the year, pressure from disease will be at its peak.

Equipment :-Servicing and checking of equipment to continue on a daily basis, with the emphasis continuing on preventing oil damage from leaking or damaged pipes, motors and valves etc. Safety switches and cutting units should also be checked each week and any damage recorded & reported for urgent repair.

Sharpness of cylinder reels needs to be checked since cutting with blunt blades can add to the risk of disease pressure.

Irrigation: The system should no longer be in use and next month, it should be scheduled to be drained down for the winter. Any repairs to leaking valves, pipes, cable breaks and so on should be completed before being shut down, in order that the system is fully up to speed as best as can be assessed and to limit any down time at the start of the next season.

Compound: As in previous months take any opportunity to tidy up external areas of the compound and to check on supplies of sands, gravel, fungicide & wormicide which are likely to be required over the coming months.

For many courses, October is still the main month of the year when major renovation work to the greens is completed. This is largely a result of a full and busy playing season and with it, the risk that recovery from coring, tining and especially scarifying will be slow.

As soil temperatures decrease, growth is also in decline and it may take some time for the surfaces to recover, especially if overnight ground frosts occur. However, that is a choice for individual clubs/courses to make and all concerned need to accept the reality of a late season renovation program. Late deep scarifying should be avoided unless absolutely necessary although a light pass at less than 12mm depth should still recover fairly quickly.

Coring with traditional 13mm tines is the norm and unless root-zone conditions are wet, then this operation should be completed within a couple of days with a clean surface remaining. Top dressing with a straight sand mix or with a 10 to 20% addition of organic material will follow immediately and at least 1 ton of material will be required per green.

This must be thoroughly brushed/matted/blown into the core holes. A further light dressing may be needed to smooth the surface and fill the remaining holes but care must be taken not to smother the surface and increase the risk of disease attack. Any amendments such as Axis can be added to the mix or applied afterwards; this being especially beneficial in shaded areas or in hollows that tend to gather moisture.

The benefit here is the increase in pore space which improves drainage and air circulation within the root-zone. For those opting for deep tining, much the same criteria applies but even more material may be necessary but again there is a need for caution to prevent smothering. In all cases, periodic rolling will help to restore surface smoothness. Mowing frequency will steadily decrease and by the end of October the HOC should be at or close to 5mm but there are of course exceptions depending on the standard of course and grass species present.

There will be a need to maintain a balanced nutrient level within the turfgrass, more so if the greens are to be renovated since this will aid recovery. However, too much Nitrogen and succulent growth, leads to an increased threat of disease. Any feeding program should contain a mix of low N, high K plus a small amount of chelated Iron.

Other small additions of Calcium, Magnesium and Seaweed extracts can help to form part of the overall feeding program which gives the plant sufficient nutrient and helps to strengthen the plant cell wall; this being a key aspect for disease prevention. Another useful addition to any mix is phosphite as mentioned in last month's article; this acting as a mild fungicide.

The same applies to using a dew dispersal product but these products are merely an aid, not a replacement for sound turf management. 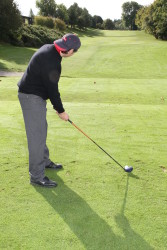 Mowing requirement is likely to remain at twice per week to start with but reducing to a single cut by the end. Once the last main 'summer' competition is over, the teeing areas should be scarified or tined (possibly both) and then top dressed afterwards.

Where dwarf rye is the dominant or preferred choice of grass for wear tolerance, then over-seeding can still be contemplated; perhaps more so in southern England. Once any renovation work is complete, then the HOC can be raised by 1 or 2 mm to give greater protection from wear.

An Autumn feed may be required but this will be based purely upon the needs of the turf and largely dependent on when the tees were last fed. The standard requirements of low N and high K should continue. Where earthworms are a problem, the first application of Carbendazim may be necessary although generally this is not usually required until the following month. A common issue on small tees is the damage caused by the inside wheel of a triple mower.

Operators need to avoid any tight turning and where damage has occurred, these areas should be re-turfed as soon as renovation work is complete.

Collars and front approaches or 'aprons' may require end of season aerifying and top dressing and if so, this should

be similar to that carried out on the greens. In general, this work is limited to key areas but where summer drought stress occurred on high ridges, shoulders etc, then the importance of such work will be much higher on the agenda.

Care must be taken around sprinkler heads and the depth of tining must not be at risk to underground irrigation pipe. The main area of greens surrounds may require some limited tining and dressing, more so in worn areas or where traffic flow is restricted. In heavily worn areas, over-seeding should follow once the initial work is complete.

Similar to tees and banks, worm control may be required if the course has a high presence of earthworms. The application of a sulphur based fertiliser may suffice but this must be part of a planned program to avoid over acidifying the surface, albeit unlikely on greens surrounds. The use of sharp sand in key areas is another alternative, especially if ground conditions tend to be heavy and wet during the winter months.

October may also see the start of using traffic control measures for controlling wear around greens and bunkers. The use of post and rope must be discreet and fortunately there are good product examples on the market which are unobtrusive to the golfer but give the desired effect.

Mowing requirement is now likely to be a weekly task unless growth dictates otherwise with the HOC remaining at between 14mm and 17mm for the majority of courses. Much will depend upon individual circumstances, current moisture levels and soil temperatures. With the pressure on mowing reduced, it should be less of an issue to choose a dry time for mowing and possibly spread over two days.

A cleanly presented playing surface should be the priority at all times. Scarifying in October remains an option for those courses where a build-up of fibre has occurred, although this task is better carried out earlier due to a faster recovery period. However, the same criteria applies re depth and cleaning up debris as mentioned in the previous article. 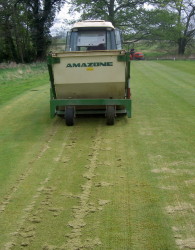 October is usually the month where deep tining or slitting can commence but again, this will depend upon individual course conditions and requirements. Leaves will start to fall in greater amounts as the month progresses, therefore periodic use of a blower will be needed to keep the main playing areas clear. With regards to feeding, a few courses may benefit from an Autumn/Winter feed but this is likely to be limited to either high end properties or those on particularly weak or stoney soils and where grass cover is poor.

Worm control could be required before the month ends but generally this is held back until November unless conditions dictate an earlier control. Bearing in mind a full course treatment costs around 1k, a second application can prove a costly hit to many clubs. The use of a wide multi-brush unit can be used when conditions are dry to disperse any wormcasts although this is no substitute for effective control.

The mowing requirement will be reduced and many clubs may only need to cut the rough a couple of times during October. Management of deep or out of play rough should continue when time permits with a view to 'cleaning' and 'topping' all areas before the season draws to a close. Blowing leaves and debris clear will possibly gain in importance unless the course is largely devoid of trees. Any remaining weed will now have to wait until the following year but for most courses this should no longer be an issue.

Bunkers:- Maintenance will continue with regular edging and trimming but with growth fast reducing, there should be less routine work to complete other than raking and blowing sand clear from the surrounding banks or faces. As the month progresses and the main renovation work to greens and tees are completed, then a start can be made to any bunker renovations that are planned for the winter season.

Such work will have been planned and costed in advance and should be part of a rolling capital improvement. This work is usually carried out in-house unless on a large scale project. With drainage, erosion and wash-out the likely key challenges to overcome, it is important that any planned changes are effective in over-coming such problems.

There are many different methods of renovating bunkers so choose one that is relevant to the objective intended, within the agreed cost and with future maintenance taken into consideration.