With June being the wettest month of the year to date for much of southern and eastern Britain, it gave most course managers a welcome break from dealing with issues of drought stress, limited growth and a slow recovery from spring renovation work.

Frequent wet and often cool days gave irrigation systems a respite and helped to conserve dwindling supplies of water for some, especially with drought orders now in place for much of eastern England. With soil moisture levels being replenished, at least for the time being, growth has benefitted and, by the end of the month, courses were green once again, less stressed and previously seeded areas on the move.

What a difference a month can make in our topsy-turvy weather pattern, and 2011 is proving once again to be a year of excesses. Some of course may say it is inevitable that rain would fall in June since two major events, namely Wimbledon and Glastonbury have a tendency to be rain affected. The change in conditions allowed many to catch up with selective weed control and, although cooler than normal, weed control should still be achieved as long as the product is not 'washed-off' from the leaf; timing being of great importance.

Preparation of putting surfaces also 'stepped-up' a gear without fear of subjecting the turf to further stress. This is much appreciated by golfers since expectations in June are invariably high. Towards the end of July, growth generally slows down and this is when temperatures tend to be at their peak as previous Met Office figures confirm. We can also expect nearly 170 hours of sunshine, with more likely in the south of England.

However, July 2009 was a complete wash-out for many and in years 2006 and 2007 it wasn't a great deal better. It is therefore more in hope than based on any future data that having two continuous wet months is somewhat unlikely, but who would bet against it? The key, therefore, is to be prepared.

With the Open Championship being fully televised around the middle of the month, golfers will expect their own courses to be in peak playing condition, therefore work in July should focus on surface preparation, course presentation and playing quality.

Continue to keep the course up to speed, keep on top of your mowing regimes and ensure the course is looking its best.

July is a busy time for golf clubs with so many club competitions and society days going on.

Also you should be planning your winter works schedule and ordering materials or contractors. 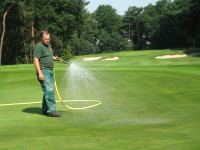 Maintaining smoothness and consistency of putting surfaces with good pace will again be the main criteria as the golfing season reaches mid-way.

Irrespective of prevailing conditions, golfers expect to be playing on perfectly prepared surfaces with good and consistent ball roll. Routine practices will largely continue as before with mowing carried out 6 to 7 days per week at around the typical 4mm HOC.

With the emphasis on putting quality while guarding against drought stress, a number of practices will have to be 'juggled' as to the needs of both golfer and turfgrass. High soil temperatures, ie above 18° Celsius will start to reduce the plant's ability to photosynthesise, which in turn can lead to additional turf stress.

Therefore, physical practices such as grooming and verti-cutting may have to be curtailed while brushing, sarrel rolling and hand watering are increased. The use of seaweed extracts which are full of cytokinins (plant hormones) help the plant through periods of stress by restoring the balance in chlorophyll content.

The use of wetting agents, following light aerifying of the surface, will help to cool the surface as well as supplying adequate moisture to the roots. Ridges and higher 'shoulders' around the perimeter of many greens are particularly prone to drought stress and, as such, will require more intensive management. During hot periods, there can also be a build-up of carbon dioxide in the root-zone and needle, star or micro-tining will effectively 'vent' the soil, allowing oxygen to reach the roots.

Applying a plant growth regulator (PGR) such as Primo Maxx will help divert the plant's energy towards the roots, thus reducing the amount of water that is required as well as improving turf density. A small amount of nutrient added to the tank mix is generally regarded as 'best practice'. Should conditions be less stressful, then work to the greens in July will largely be a continuation from that carried out previously.

Additional rolling may negate the need for daily mowing and, should temperatures remain high, then raising the HOC by 0.5mm may be required. Where putting surfaces are composed largely of Poa Annua, then anthracnose foliar blight may develop. High soil temperatures and damp surfaces can exacerbate the situation and, if greens are prone to such attacks, then it is important to reduce the risk of this stress related disease.

Cultural control methods include maintaining adequate fertility, avoiding dry patch or drought stress and alleviating compaction. If chemical prevention is required, then applying a mix of the active ingredients Strobilurin and Chlorothalonil along with an adjuvant will help to protect the plant. The use of Phosphite added to a foliar feed tank mix can also be beneficial since this can act as a mild fungicide. 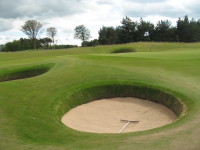 When growing conditions are good, mowing 2 or 3 times per week with a ride-on triple at around 12mm will be the norm for most courses. Few courses cut tees using pedestrian mowers, since this is more time consuming but on raised, smaller tees, there may be little alternative. On tees smaller than 50m2, care should be taken as to turning, since tyre marking can easily develop as there is little scope for varying direction.

With playing levels high, daily movement of tee markers and the playing areas regularly divoted will be the other main criteria. Any additional watering should be sufficient to aid recovery and maintain turf vigour, but largely aimed at developing a good root structure. Presentation should be high on the agenda and this will include blowing debris and broken tees clear of the playing surface, emptying litter bins, filling ball washers and maintaining all accessories in clean condition. A good practice is to use a small spray cleaner to clean hard surfaces before being wiped clean.

It is a small 'attention to detail' routine but it can make a difference. By mid summer, nutrient levels may be on the low side, therefore applying a foliar mix of low N, high K mixed with a PGR, will give turf the required mid-season boost.

Tees composed of a high sand rootzone may require a higher level feed and, if no irrigation is available for tees, then consider using a wetting agent on a monthly basis. Should drought conditions prevail then raise the HOC, topdress with a compost mix, apply a wetting agent and irrigate as best as possible.

Surrounds:- Other than mowing once or twice each week, it is unlikely that any additional work will be required this month. Greens surrounds nowadays are largely mown with lightweight triples which can negotiate banks and mow close to bunker edges without any risk from 'scalping' or tyre damage.

HOC should remain at around 35mm unless there is a need to mow closer to accentuate swales that may form part of the greens surround. Weaker areas should be dressed or 'divoted' and nutrient levels sufficient for adequate growth.

Any remaining weeds, such as clover, can be controlled using a broad spectrum selective herbicide, but only if the turf is not drought stressed. For those courses with no automatic irrigation to front approaches, the use of hose pipe and sprinkler may be required but usage in this area will remain a question of priority.

Useful Information for Tees and Surrounds 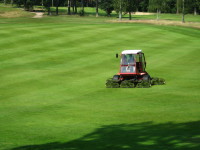 Under normal conditions, definition and presentation should still remain very good in July but, if dry conditions return, then the effect will be reduced. Mowing is normally slightly less frequent than in June but the HOC will remain the same with most courses settling for between 14mm and 17mm.

A minor 'nuisance' sometimes encountered is long stalks of grass that tend to get folded over instead of being cut. A monthly pass with a rotary mower set at about 30mm height will eliminate these unsightly stalks. If time permits, the worst affected areas for divots should be tackled, ie lay up holes or where a short iron is played uphill or over a water feature.

Divoting parties involving juniors or other members often works well, and the lure of a pizza and a beer afterwards usually guarantees sufficient numbers. If further weed control is required, then this can be carried out, although by July it is more likely to be limited to selected areas only and as part of the drive to use less pesticides. For those courses with irrigation, again it is a case of adding sufficient water for the benefit of the turf and not the golfer. 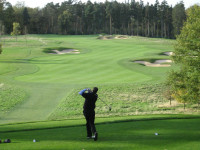 By the end of July, the frequency of mowing should have eased, particularly in areas of the main semi which should continue to be cut at the standard 50mm HOC.

The narrow band of intermediate rough should still be cut weekly, unless there is insufficient growth. Areas of deeper rough may now be ready for cutting with a flail type unit. Ideally, this should be collected, especially if a selective herbicide has been applied the previous month.

Removing the clippings will help to lower the nutrient level within these areas, thus giving the finer leaved grasses more chance of survival at the expense of many coarser agricultural style grasses. By 'thinning' out the sward, there may ultimately be less likelihood of lost ball searches. July is also a good month for controlling clover in the rough, this weed being more common on nutrient hungry and on alkaline soils, but again this work may be weather dependent.

During mid summer, raking either via machine or by hand, should be carried out on most days, although this will depend upon staffing levels and the number of bunkers present. Edging, trimming and removal of stone will be an on-going requirement, along with the re-distribution of sand to ensure an adequate and consistent depth of sand.

If prolonged dry weather persists, steep sand faces may become exposed and as such weed and stone may emerge. This will require constant pushing of sand back up the face and, in some cases, it may be necessary to water the sand if connection points are nearby.

The reverse, of course, could also happen if short bursts of heavy rain cause wash-outs. Mixing a PGR with both a low N feed and selective herbicide may be a good exercise for some if the bankings are both weedy and lacking in nutrient.

Yellow suckling clover can be a troublesome weed around bunkers and is fairly common throughout courses in the south of England, especially on higher pH soils. Removing sand from grass faces or from revetted turf on links courses via a hand held blower is also likely to feature high on the weekly routine.