Overview:- with February proving to be a largely non-eventful month in terms of rainfall (a little above average) and temperature, both play and work throughout the month was continuous: a far cry from the end of 2010 when most of the UK was covered in ice and snow.

However, February was a rather dull month with sunlight being in short supply; hence the usual concerns of increased moss on some areas of the course. With only the odd day or so of frost during the past month, most Course Managers were able to give tees, fairways and surrounds a trim as well as being able to continue with aerifying work on the greens.

February also gave most greens staff the time to crack on with any project, landscaping or environmental work, especially where turfing was involved. Towards the end of the month, day time temperatures climbed into double figures for the first time this year, resulting in the first signs of growth, albeit minimal and only for a few days. Nevertheless, a sign that spring is just round the corner.

On that note, March is regarded as the start of spring with average temperatures in the UK of around 5° Celsius. Although day time temperatures are over 3° higher, the potential for overnight frosts and cold evenings will 'pull back' any real signs of growth, apart from perhaps in the south of England.

Rainfall figures since 2000 have shown a trend of being below average; the two exceptions being in 2001 and 2008 where heavy rain continued to delay the onset of spring and hampered most pre-season work. The amount of sunlight will be considerably more than in February and, by the end of the month, the hours of daylight and darkness will be equal.

Often, there will be days when spring has most definitely arrived, whereas other days will feel like a return to winter, therefore beware of the 'false spring' and avoid pushing growth and for lowering the HOC too early.

Try and finish off all winter works. Continue to aerate fairways, approaches and tees whilst there is still plenty of moisture in the ground.

Ensure all your golf furniture, benches, signs and tees markers are all fit for purpose, clean and ready for the new season.

Depending on the weather and resources, get ready for your spring renovations, communicate well with your members, so they are aware of the extent of work planned and reasons why you are doing it.

Ensure you have all the resources and materials available for the onset of spring renovations.

March is a good month for pre-season renovation work to take place before the season gets underway; the 'unofficial' start date being the 1st of April. Soil temperature for most will not rise above the 6° Celsius mark until the latter half of the month, therefore recovery and growth will be in short supply until well into the following month.

Therefore, in order to provide an acceptable playing surface, there needs to be a balance between the agronomic needs of the turf and the wishes of the golfers. That said, much will depend on the condition of the green and the desired objective. Recent trends have shown that many Course Managers prefer to carry out solid tining or coring work with 3/8th or less tine sizes and then follow-up with micro-coring in April.

The larger ½ inch coring operation is then left until August, when conditions are usually ideal for such work and a much faster recovery ensues. Where deep scarifying is the preferred option for thatch control, this practice is best carried out later in the season when there is sufficient growth for recovery. Attempting to deep scarify in March, when cold easterly winds are likely to follow, is fraught with potential problems as well as golfer annoyance, so best to avoid if possible.

Prior to any light scarifying, coring or tining work, the greens should be given a light spring start-up feed, but just enough to encourage growth and recovery. Products containing around 3 to 4% Nitrogen and a higher amount of sulphate of Iron are often popular, especially if moss 'discouragement' is required.

A main pre-season or base feed, usually with a granular product would then be applied in April. The first main top dressing of the season will quickly follow the chosen cultural practice, where as much as 1 ton per green of dressing would be applied; this depending on the size of the green and whether or not core or deep tine holes need to be filled. Less would be applied if no major 'cultivation' work is carried out.

Any planned over-seeding should be held back for a few weeks until soil temperatures are favourable for germination. The temptation to reduce mowing height should be left until the greens have 'settled-down' and there is clear evidence of recovery, therefore the HOC should remain at around 5mm for as long as possible. Beware the false spring! Any risk of a late surge of disease pressure from Fusarium should be minimal, but avoid pushing growth and smothering the surface with top dressing.

March should see the bulk of the pre-season work completed, but more will be required the following month before the playing surfaces move nearer to the desired level. As always, the above is an overview or generalisation and where shade, wind exposure, high rainfall and so on persist, then such conditions need to be 'factored' into the overall management plan. 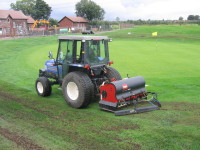 For teeing areas, much will depend on whether or not the main playing areas are being rested or have been in use throughout the winter. If the former, then ideally they should be fertilised, tined, dressed and over-seeded before being brought back into play.

For tees which are in use all year round, then much the same is likely to apply, although a small section may be left undisturbed to accommodate play for the next 2 to 3 weeks. For larger teeing areas, this may be an option but, where teeing space is limited, it really comes down to doing the best possible in the current situation.

Where separate winter teeing areas are in play, then any renovation work should be undertaken once they are no longer in use, which for most will be the following month.

Similar to greens, tee mowing height should remain at a higher height until growth commences and new seedlings have germinated. Any over-seeding that takes place will have a better chance of success if top dressed afterwards and mowing height is not lowered.

If 'unused' tees are showing high levels of moss, then treat with an appropriate product prior to scarifying work late in the month. It usually takes about two weeks for any product to weaken the moss sufficiently.

Surrounds:- Towards the end of the month, there should be the first signs of recovery from winter wear. Heavily 'trafficked' areas will be the last to recover and, where this is the case and in spite of installing traffic control measures, such areas should be treated similar to tees. For many courses, this may require tining, top dressing and over-seeding small areas where grass cover is weak.

Once treated, these areas should be protected as much as possible from resultant wear. Only in essential areas should re-turfing be contemplated due to the risk of the turf drying out. Where this is deemed necessary, then the possible need for watering must be readily accessible.

Green Surrounds can be fertilised late in the month, if required and conditions are favourable. Too often, ground conditions can dry out fairly quickly if winds are in an easterly direction, and such applications should be held in abeyance until warmer and moisture conditions prevail. If cold and dry conditions continue for any length of time, a foliar feed may give some respite without the risk of leaf scorch.

Useful Information for Tees and Surrounds

This is the last month that deep tining work can be carried out before the season gets underway. Although best carried out earlier in the year, ground conditions may dictate that this is not possible.

Fairways often take on a bleached appearance in March and lose any real definition. This scenario can be overcome by applying a mix of Urea and Iron, which many would regard as being more of a 'cosmetic tonic'. At roughly a 25kg bag of Urea per fairway, mixed with a soluble Iron product, the total cost to apply to all fairways should be under £300 and may help to give the club a competitive edge.

This should suffice for a few weeks until higher temperatures allow for normal growth. Where nutrient levels are low and the turf is in need of a boost, then a suitable fertiliser can be applied from late in the month onwards, especially in the southern half of the UK.

Controlled release fertilisers have proved popular in the past, but they are expensive and can lead to a build-up of excess fibre. Every course is different and applications can vary from Foliar, applied a few times per year, to more Sulphur based granular products that have an acidifying effect on the turf.

This would generally be applied once or maybe again in Autumn as a winter feed. Mowing will continue but, again, the height of cut should remain high since the risk of overnight frosts will not have disappeared just yet.

The emphasis should now be on presentation and playability for the coming season, with all major renovation work now complete.

If general trimming, edging and topping up of sand levels is not already underway, then a start needs to be made as soon as possible. Additional sand should have sufficient time to 'bed down' before the new season but, if not, then it can be watered and consolidated using a 'whacker plate' or similar.

This will help to avoid the 'plugged lie' syndrome in bunkers. Since growth around bunkers is likely to be sparse, the removal of excess sand is essential. A back pack blower is ideal for this purpose. Weak areas can be fertilised and, where possible, a sufficient length of grass can be left on the bank or bunker face, especially on south facing slopes. Where renovation has taken place earlier in the winter, such bunkers should be close to being brought back into play. 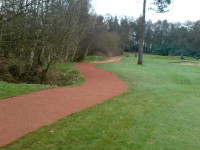 Paths: Once the main work to greens, tees and surrounds etc are complete, and following bunker edging and cleaning, paths are likely to be next in the list of priorities for pre-season renovation.

Once any holes have been filled and any debris scraped clear or removed, then a light path dressing of the appropriate material should be applied, possibly via a belt dresser type hopper. Freshly re-surfaced paths can give an enhanced aesthetic appearance to the course, and the secret is to treat and apply on a regular basis as opposed to a full scale and costly renovation. Where path ends have become worn, they should be treated as per green surrounds and given protection from wear as much as possible.

If re-turfing has to be carried out, then topdress quite heavily with a compost mix to prevent the turf from drying out.

Course Accessories: This is the last month for these to be cleaned, repaired and re-painted ready for changing in time for the start of the new season. Any items such as flag pins, hole cups, bunker rakes and so on that are required need to be ordered well in advance to prevent any undue delays. Hazard markers are often painted 'in situ', especially if there are numerous ditches or water features present on the course. Wet days are ideal for painting and then storing on some form of racking system.