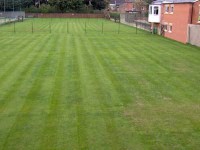 Soil water content will have certainly increased in recent weeks due to the recent heavy rainfall experienced in most parts of the country. Many soils are now becoming saturated, a condition when the air spaces in the soil become predominantly filled with water. When soils remain in a saturated condition they can easily be damaged/de-structured by traffic or use of machinery. It is essential you keep off playing surfaces when saturated. A programme of aeration will aid surface drainage.

It is essential you keep the surface open and free draining, aerating the playing surface with a sarel roller or some solid tines will be beneficial. However, only use machinery on the surface if you can operate without causing any smearing or damage. See article on Aeration.

The recent mild, wet weather may have also have influenced an outbreak of disease, fusarium and red thread have been quite prolific in recent weeks. The combination of the warm weather and leaf wetness tends to encourage disease. Keeping the sward dry is essential to prevent disease taking hold and spreading. Leaf wetness is a common problem at this time of the year, particularly in the mornings when early morning dews appear on grass surfaces.

Brushing or caning off this dew is an important task that should be undertaken each morning. Knocking off the dew helps the sward dry out more quickly.

Earthworm activity usually increases in November. Earthworms can survive in a wide range of conditions, but most activity is dependent on the quality of food available. Worms like plenty of Organic Matter (OM), therefore greens with a high thatch problem tend to encourage worm activity. Soil pH also affects where earthworms are found. In strongly acid or alkaline soils earthworms are rarely seen (pH less than 4.5 or greater than 8). The soil texture will also affect the number of earthworms found; they prefer clay soils and are less frequently found in sandy soils. There is still time to overseed and repair damaged grass areas. There may be a need to over sow recently repaired areas especially if the seed has not germinated very well. Rye grasses will still germinate in favourable temperatures in November.