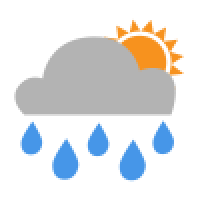 On the cool side throughout April, with most of the light rain isolated to the South.

Most of your aeration operations should have been completed during the winter period. Generally, we do not aerate clay soil profiles after January, as we do not want to encourage cracking of the clay surfaces. However, if there is a need to help remove surface water from the courts, we can utilise the sarrel roller which lightly aerates the top 25-30mm, allowing any surface water to drain down deeper into the soil profile. Carry out the following regular tasks:

Rolling. It is essential to carry out an effective rolling programme in April. Continue to roll the courts, firstly across the line of play, followed by rolling down the length of play. Timing of this operation is vitally important. Trying to roll when soil conditions are wet or too dry will not achieve the desired effect.

Mowing. The mowing height on the courts should be lowered to around 8-10mm for the playing season, but remember not to remove more than 1/3 of total grass height in each cut.

Light scarification or verticutting can be carried out at fortnightly intervals pre-season. Removing horizontally growing grasses and surface organic matter are always beneficial for the onset of court preparation which, together with brushing, will improve the quality of cut.

Given other factors such as available nutrition are in place, and air is ubiquitous, the main requirements for plant growth are; 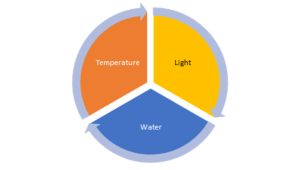 Of those three variables, apart from a small number of tightly controlled growing environments where undersoil heating and lighting apparatus can be employed, turf managers across the British Isles have effective control of one; water. Of the remaining two variables, then at least in the northern hemisphere, one is guaranteed to improve from the 21st December. This is thanks to the suns relentless daily progression across the sky as the earth rotates around its orbit. The third factor however, is the variable most prone to chaotic and unpredictable behaviour, a fickle parameter of which the turf manager has very little control, that factor of course is temperature.

As with any interlinked system all factors must be in alignment for the system to function correctly, if one is lacking the other factors cannot step into compensate and make up for a deficiency. Plants require adequate light, adequate water and adequate temperature for their metabolic systems to function optimally. Systems which then lead to growth, as new leaves unfurl like organic solar panels eager to absorb electromagnetic radiation to fuel a plants energy reactors. Something which at least from the plants perspective is a necessary precursor to procreation in the form of flowers and seed. In the instance of sports turf surfaces we dispense with the procreation aspect (Poa annua aside!) and focus on cultivating steady, controlled leaf growth. Leaf growth which is required to repair the winters damage and regenerate sports turf surfaces into peak condition in preparation for the seasons play.

Cold springs then do few favours for the turf manager as a lack of temperature limits not only the plants ability to react, but also the ability of all the other biological organisms plants so intimately rely on, to mineralise elements for food, or help protect against pathogens, many of which are also lying low in the chilly conditions themselves. There is of course a reason your fridge is set to 5 °C; a cold soil then is a dormant and unproductive soil.

Within a natural system a cold spring isn’t too much of a problem of course, things will kick in sooner or later and then catch up. However, for turf managers one factor is bound to cause difficulty; expectation. Expectation of perceived “correct” conditions for the time of year, usually expectations closely aligned to a fixtures list. A fixtures list which was of course arbitrarily fixed without recourse of consultation to the weather, that which is the most chaotic and unpredictable of the master variables required for plant growth.

Tricky times then, and ones which will test the political and communication skills of those seeking to manage expectation; tricky also from an agronomic perspective.

It is not all doom and gloom however, the good news is that the sun continues to rise and progress ever higher up the sky, bringing with it increased daylight and periods of localised warmer intensity on turf surfaces to encourage biological activity. The limiting factor as we enter into April is the effect of the cold easterly air on night time temperatures. It is when night time temperatures dip into single figures that the benefits of periods of warmer sunshine during the day are lost. The result being that the base line temperature each morning starts afresh from a low point, never being able to build momentum into the next day from retained warmth overnight. Consequently the bar for metabolic activity remains frustratingly low.

In this context it is worth reminding our self of how temperature ranges effect growth patterns in the grass plants we are managing.

A soil thermometer is a vital and inexpensive tool for identifying when rootzones are warming up. Such knowledge helps to inform the turf manager on timing of inputs and maintenance work.

As stated, soil temperature is a key factor of growth, one core reason for this is because that is where the food and water gathering parts of the plant and the associated microorganisms reside. Consideration of that fact should lead one to conclude that soil based nutrition is going to be less available through the roots and organic nitrogen sources such as bone, feather meal and urea are not going to be made available (mineralised) by microorganisms. When soil temperatures are low but the sun is growing in elevation and intensity enough to create localised warming of the soil surface for periods during the day time, it is sensible management to optimise those windows and give the plant and microorganisms every chance to work as efficiently as possible in their short spells of warming comfort.

The first part of that process is ensuring that nutrient minerals are balanced in the soil by undertaking a broad spectrum soil analysis which reports result for all plant essential  macronutrients and micronutrients. The second step is ensuring that all parameters are within guidelines and a plan is in place to top up deficient soils . In the meantime a good way to overcome soil deficiencies is via foliar application. No one nutrient is more important than the other, they all play an equal, balanced role in plant function and health.

Nitrogen –          Whilst soil temperatures are cold choosing mineral salt nitrogen sources such as nitrate and ammonium are the correct options, maximum foliar uptake of applied liquids will peak after 48 hours so try to avoid cutting in this time period and certainly return clippings to the surface.

Chelation –         Chelate is derived from the Greek word for claw. Chelates are organic molecules which in simple terms encapsulate a plant nutrient and assist it in being absorbed into the plant. Thus it is recommended to choose liquid feeds whereby the nutrient metals are chelated.

The addition of a high quality humate containing fluvic acid will further assist this process.

Carbon –              The base energy ingredient for plants and soil microorganisms, an application of carbon sugar will assist in maximising conversion and uptake of nutrients, as well as stimulating the soil ecosystem.

Aeration will allow oxygen into the soil which in turn enables many chemical and biological processes however, be mindful that recovery will be slow and protracted whilst soil temperatures are low so narrow tines or slits are preferable.

Moss will be an issue on many surfaces and an application of lawn sand often proves particularly effective in tackling it. However be aware that moss is best treated when moist so avoid application when the moss is drying out. This is because the moss will be entering dormancy and the iron will not have as good an effect, quite a few people were caught out by this in April 2017 and were then disappointed by their level of control.

Similarly to aeration do not be tempted to scarify surfaces to remove moss when growth is sluggish, this only thins the sward allowing weeds opportunity to germinate, not to mention the stress it places on an already struggling grass plant. Scarification should only be carried out when grass plants are actively growing.

A cold spring is never conducive to the germination of grass seed, late August and September are the months nature intended this process to take place. Germinating and maturing seed through a cold April is a challenge. So unless you have access to good irrigation to nurse it through warmer days in May and June, it may be worth waiting until later in the year.

Disease pressure is likely to be low whilst temperatures remain unseasonably cold. Keep an eye out on forecasts however, as breaks in the weather culminating in warmer, wetter days may provide windows for fresh outbreaks on scarred areas. Calcium and Seaweed are good non pesticidal solutions at this time of year when applied before disease is active.

Taking time to create an integrated turf management plan with respects to insect pests is absolutely crucial as proactive solutions are the only available options.

Recording areas affected and planning to apply nematodes during the application window later in the summer helps to prevent badger and bird damage later in the year. The first step is simply remembering to keep and eye out for beetles and crane flies on your site before noting down the date to refer to in later years. Once you have seen adult pest activity project forward the application time for nematodes using the info-graphics on the Pitchcare Shop to aid you.

The first step with respects to chafers is being able to monitor the beetles by deploying chafer beetle pheromone traps onto the site in May and June.

Even though warm hot weather seems a long way off it is important to give adequate time for surfactant chemistry to build up in the soil ahead of stressful periods, prevention is without doubt better than cure. For this reason surfactant applications should continue as per planned wetting agent programmes.

You should have had your mower serviced and sharpened ready for the new season. 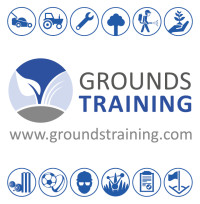 More details about all the courses can be found on our new Grounds Training website, or you can email Carol Smith for information.