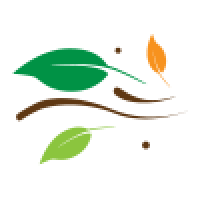 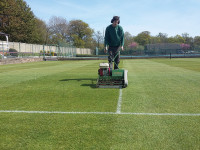 All maintenance work will be determined by your local soil and weather conditions. Some courts will be waterlogged, with some of the artificial surfaces possibly damaged by the rain and standing water.

Mowing should be delayed until surfaces have dried out, and hopefully becoming more frequent as the grass begins to grow, aiming for 2-3 cuts per week by the end of the month. Any increased mowing regime helps stimulate the grass plant and helps thicken up the sward.

Moss and algae can be a serious problem on tarmac tennis courts, especially if the courts are situated next to trees and hedges, the shading and damp conditions create a favourable environment for moss and algae to grow. Regular brushing and cleaning of the courts helps disturb the moss preventing it from taking hold. However, once established, the best methods of control are by a combination of chemical and washing activities. You should use approved chemical products when treating algae problems.

As you are reading this in early March, hopefully the horrendous rainfall we experienced from the last couple of weeks in February are now a distant memory. Up to that point, the winter had been fairly kind, with mild temperatures, conducive for small amounts of growth and recovery and the rainfall hadn’t been too significant, which meant that most sites were reasonably dry, given the time of year. Well, what we didn’t get over December and January, certainly came in February, with what has felt like storm after storm.

The recent wet weather has meant that many have had to delay significant maintenance work they may have had planned. There were some who took advantage of the favourable weather very early season and managed to get activities finished before the bad weather hit. Everyone else will have to wait until surfaces become suitable to get back onto the land to carry out the required maintenance. Patience is key here, as going early when conditions are not right can do more harm than good.

Looking ahead to March, more settled weather has been forecast. Typically for the time of year, there is still some rainfall to be expected, but as the month progresses temperatures look set to gradually increase, with night-time lows breaking away from just above freezing to a consistent 5/6 °C.  We are already seeing the increase in daylight hours, which is only going to have a positive effect on turf growth as they continue to get longer.

March is often the month that is synonymous with the start of spring. There is a raft of maintenance work to be carried out ahead of the summer season. This could involve small scale ongoing maintenance, or it could be more heavy duty ‘corrective’ maintenance, it all depends on the site and the conditions. Crucial to the success of these types of maintenance is the recovery following the work being carried out. Applying a fertiliser with the most suitable nitrogen sources, with readily available nitrogen for plant uptake, will stimulate growth and recovery.

Nitrate and ammonium are both readily available nitrogen sources. Nitrate is freely available for plants to uptake and can therefore stimulate growth in cooler conditions; it is highly mobile and can reach plants’ roots quickly, providing a quick nutrient supply. Ammonium also provides a readily available form of nitrogen, making it a particularly good choice in the early season. Its ability to fix to soil minerals makes it less mobile than nitrate. As soil temperatures begin to increase, microbes will rapidly begin to convert ammonium to nitrate in the process of nitrification. Utilising a nitrogen source that is not readily available may not give the desired response and growth required. Methylene Urea (MU) is an example of a long release source of urea nitrogen fertiliser. MU’s rate of decomposition is determined by the action of microbes found naturally in most soils. The activity of these microbes, and therefore the rate of nitrogen release, is temperature dependent. Organic fertiliser is composed of natural materials derived from animals and plants. Relying on natural biological and chemical processes, nutrient content tends to be lower, less exacting and released much slower than conventional fertiliser products. As the nutrient release is slower, so is the turf response. For those not carrying out maintenance work where recovery from surface disruption is required, liquid applications of fertiliser to coincide with the increase in temperatures may be adequate to gently ‘wake up’ the turf and give the necessary response ahead of subsequent granular applications later in the spring, when temperatures have risen further.

As the plant’s internal factories start to become more active, until there is adequate light, moisture and temperature for the plant to produce enough of its own energy resources, applications of biostimulants, in the form of carbon rich products such as seaweeds, sugars and carbohydrates will be beneficial to the plant and soil as they can act as a readily available energy supply for the plant and help reduce any stress, such as that from any maintenance works carried out. Reducing stress at this time of year can have an impact on the presence of Poa annua and specifically the flowering seed heads that are produced when the plant is under stress. Across all sports, this is an undesirable grass due to its characteristics, therefore it is recommended that steps are taken to relieve stresses that may induce flowering. Suitable plant growth regulators may also be applied at this stage to regulate the growth and reduce seed head numbers.