2 Disappearing Dylan takes a trip on the Pitchcare Van

A dog is regarded by many people as a member of the family, so when Dylan, a Bearded Collie went missing yesterday, owner Holly Youde became very concerned for his safety and whereabouts.

Holly, a director at Urban Landscapes had raised the alarm to many neighbouring businesses and a mini search party ensued. Despite the eager efforts and plenty of shouting, Dylan was not to be found and seemingly had disappeared or worse some were speculating, been abducted.

What Holly and the search party didn't know, was that mischievous Dylan had spotted the opportunity to take a ride in the back of delivery driver Jon Jones's work van. 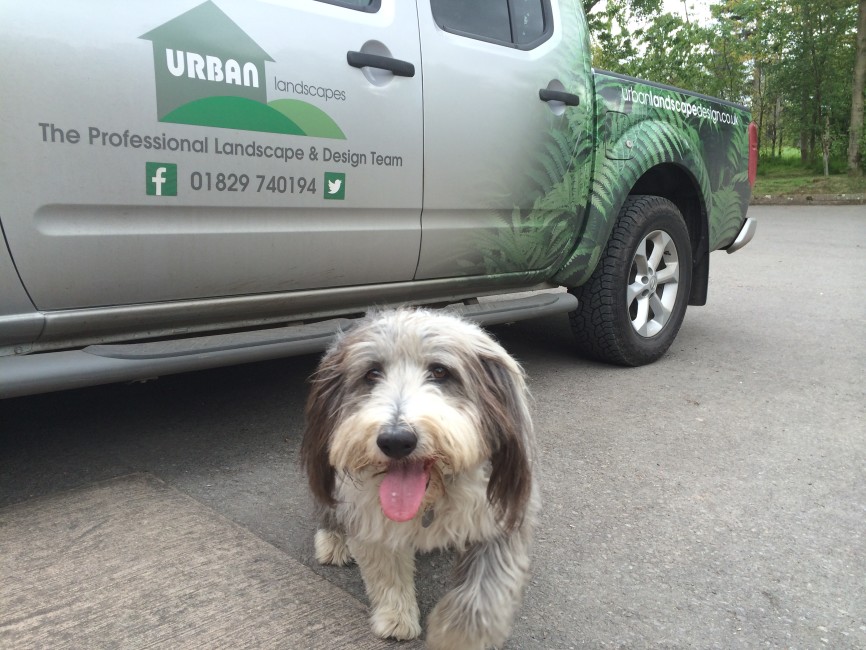 Jon nicknamed 'Speedy', a delivery driver for over 10 years at Shropshire based business Pitchcare.com, was dropping off landscaping products to Urban Landscape Design Ltd when the opportunist pooch spotted his moment to have an adventure and hopped into the back of the van.

According to Jon, "I'd left Great Barrow and arrived at my next drop, over 20 miles away when I went to unload, as I opened the door I was met by the surprising sight of this cute grey and white dog wagging his tail and looking up at me, I was shocked, to say the least, and my first thoughts were he must have cheekily jumped in on my last delivery. Dylan was now my most important package and I had to get him back to his owners quick, so forgoing the planned run, I headed back to Great Barrow near Chester where a delighted Holly was reunited with her tail wagging rascal over an hour after sparking the alarm". Whilst not appreciated by Mum Holly, Dylan's adventure round the Cheshire countryside with driver Jon was met with such amusement by the team at Pitchcare, that we thought we best reward him. Dylan, a doggie hamper is on its way, but please don't be a naughty boy and jump in the back of the van that is dropping it off.