"Nature does not work with pure cultures. I suspect that many plant diseases are influenced by associated organisms to a much more profound degree than we have yet realised..."
Fawcett 1877-1943

These words were written almost a century ago and are, in my opinion, certainly as valid today as they were back then. When I started to look at plant diseases in the early 1980s, I did what most people do and read the current textbooks and believed (somewhat naively) that this was the whole truth. That, if I understood these texts, I would understand everything I needed to know about turf disease. 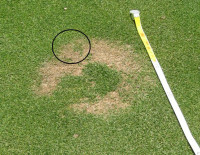 Age and experience are amazing things - age maybe not so much - but with age you develop the confidence to say what you believe, based on your experiences. Having specialised in turfgrass diseases for nineteen years, I have continually updated my views on certain aspects of disease development and one of the more important developments that I believe is affecting an increasing number of amenity areas, is the association of fungal and plant parasitic nematodes in the development of disease.

In this article, I would like to share my thoughts on turfgrass disease development and summarise some of the published information that is available on similar pathogen interactions in agriculture.

First of all a brief summary of the two individual groups of pathogens.

Fungi: a complex and diverse group of organisms which require organic substrates from which to obtain energy for growth and development, contain a chitinous cell wall, generally grow as multi-cellular filaments (hyphae) forming a mycelium, complete sexual and/or asexual reproduction via spores and, perhaps quite surprisingly, are more closely related to animals than they are to plants. In the turfgrass situation, the method by which they obtain their organic substrates from the plant varies, but most of our fungal pathogens can live quite happily as saprophytes on dead or decaying material and are, therefore, more correctly referred to as facultative parasites.

Nematodes: the second largest and most diverse group of animals (after insects) that have adapted to virtually all environments on the planet. They are unsegmented roundworms with a complete digestive system, pass though several moults to enable their development to mature male or female, reproduce via eggs, have a simple nervous system but limited circulatory and respiratory systems and, so, breathe via diffusion of oxygen through their body.

Plant parasitic species tend to be microscopic and even the larger ones are difficult to see without a microscope due to their body being transparent. They feed on the cell content of their chosen host and alter the physiology of the host to ensure that their food supply is maintained. Plant parasitic nematodes are obligate parasites.

Therefore, it can be argued that plant parasitic nematodes need a 'healthy' plant host on which to feed and fungal pathogens (generally) need a 'weakened' plant host as a food source. In situations where both fungus and nematode are associated with plant disease, which came first?

In 2002, Back et al published a comprehensive review article looking at diseases in cultivated crops and the complex interrelationship between host, pathogen and prevailing environmental conditions. We have known for a long time that plants are rarely, if ever, subject only to the influence of one pathogen but that, with regard to soil pathogens in particular, there is massive scope for interaction between the different microorganisms. We often observe so-called synergistic effects when two pathogens are involved in disease development. This means that, when working together, the two pathogens can cause greater damage to the host than their combined individual effects would ever cause.

The Root-knot nematode, Meloidogyne sp., is a so-called sedentary endoparasite in which the infective juveniles establish specific and permanent feeding sites around the phloem of infected plants. These nematodes are thought to secrete enzymes and growth regulators that cause this distinct change in plant morphology. In addition, they secrete compounds in to the plant via their salivary glands that affect the plants photosynthetic ability and relocate the products of photosynthesis directly to the specialised feeding sites. In this way, the nematodes are ensured a continued supply of nutrient but the plant is subject to increasing stresses as its nutrient supply is depleted.

Ectoparasitic nematodes do not establish such close feeding associations with the plant but graze the roots by feeding for different periods of time from individual plant cells before moving on. They tend to cause much less damage to the roots general morphology and, possibly for this reason, the number of associations that are recorded between ectoparasitic nematode species and fungal disease are much less. That said, certain species can cause a dramatic branching of root development due to their repeated activity around new knot tips, and the root symptoms that develop are characteristically excessively branched.

Another endoparasitic nematode that is often associated with fungal disease is the Lesion nematode Pratylenchus. This nematode migrates through plant root cells as it feeds and causes a breakdown in root structure, separating the outer cortical cells from the inner stele (xylem & phloem). With the loss of root structure, water and nutrient uptake and movement is impaired but, also, the resulting damage to the structure allows easy access by certain fungal pathogens.

It is not only the entry points of plant parasitic nematodes in to the roots that produce regions that can be further colonised by fungi, but when females from species like the Root-knot and Cyst nematode break through the root tissues to deposit their eggs or to mature (encyst), they cause massive rupturing to the roots which can allow easy entry of fungal infections.

There is research to suggest a possible systemic effect of parasitic nematodes in certain host plants, and that nematode infection can, in some way, also decrease a plant's resistance to fungal infection.

Over the past three years I have received turf samples for analysis from areas that have shown symptoms of atypical fungal disease. The timing of the disease development may have coincided with when the disease could be expected to develop, but the damage to the sward has not followed the typical pattern of disease development. In other cases, regardless of the timely application of plant protection products, symptoms of fungal disease (especially Microdochium patch, Anthracnose diseases and Take-all patch) have continued to develop and show a 'niggling' infection through the turf. In all of these cases, the rootzones have been found to support high populations of plant parasitic nematodes.

With documented evidence of several nematode-fungal disease developments in agricultural systems, we know that there is a real possibility that this can also be happening in turf. It makes sense and, generally when things make sense, they are worth taking seriously. I will continue to look for possible associations, and hopefully future research will prove or disprove what this 'gut-feeling' would certainly suggest to be true.