The ancient practice of dowsing - often referred to as water divining. As you might expect, views range from "divine intervention" to "a complete load of b......". Well, you get the idea!

My first experience of dowsing came many years ago when a contractor came to the golf course I was working on to undertake some drainage work. He confidently pulled out a set of divining rods and proceeded to map a number of drainage runs.

I also remember a time when, as an apprentice gardener, we were planting trees in Kings Heath Park, Birmingham, when one of the lecturers came out with a set of divining rods to indicate where a water pipe was, so we did not dig it up or plant a tree on it!

Over the years I have watched many of our industry colleagues use divining, or dowsing, rods to locate drains, ditches, water sources and electricity cables.
One such colleague is Berwyn Evans from ALS. I met up with him at Shifnal Town Football Club where he was using a set of rods to map out some defunct drains. Here, he was attempting to find out exactly where the drains were, at what depth, and where they had stopped working.

Berwyn was introduced to dowsing over twenty years ago when a friend helped him locate some drains in his garden. He was so impressed he began practising and, over the years, has become very experienced in interpreting the signs and movements of his divining rods. He can now define drains, power cables, water pipes, French drains and old foundations.

The British Society of Dowsers represent anyone who practices the art of dowsing and supports its Code of Ethics. The Society also maintains a Register of Professional Dowsers and approved Tutors. www.britishdowsers.org

The definition of dowsing is "to search, with the aid of simple hand held tools or instruments, for that which is otherwise hidden from view or knowledge". It can be applied to searches for a great number of artefacts and entities. It is most commonly known in association with searching for underground water.

What is less readily known is that dowsing can be also used for searching for other underground features such as archaeological remains, cavities and tunnels, oil, veins of mineral ore, underground building services, missing items and, occasionally, missing persons.

Although no thorough scientific explanation for dowsing has yet been found, it is frequently acknowledged that there is some correlation between the dowsing reaction and changes in magnetic flux when dowsing on site.

We have to rely on illustrations and the written word for historical evidence of dowsing. The mosaic floor in the ancient synagogue at Bet Alfa in Israel's Jezreel Valley appears to be the earliest evidence, whilst many references to dowsing occur during the seventeenth century, including reports of one Jacques Aymar who, starting as a successful water dowser found, in the 1690s, that he could also usefully employ his gift in searching for missing persons.

By the beginning of the eighteenth century it is clear that enquirers into the modus operandi of dowsing were divided into two camps; those who believed that the dowsing reaction was the result of a physical influence, against those who lent support to the idea of it arising from a mental cause. This controversy remains with us today and it is possible that both may be correct.

During the nineteenth and twentieth centuries dowsing for water, to mark the spot for drilling wells and boreholes, was (excuse the pun) a well established practice.

Whilst a scientific explanations still eludes us, the true value and worth of dowsing can be verified from the track record of successful dowsers, and the experience of those who willingly spend good money in employing them today.

Basically, The British Society of Dowsers think the answer is yes, insofar as the ability appears to be a natural human faculty. After all, animals have the instinct to seek water, often from many miles away. It is a skill which can be taught and the Society regularly holds lectures, courses and workshops to this end. However, a few people do appear to have some difficulty, whilst at the other end of the spectrum lie those who have a particular gift.

The instruments and tools used are simple. For the most part they are simply an extension of the human response, giving clearer signals than can sometimes be detected without them.

V Rod: Traditionally made from a forked twig, this instrument can be made up from any springy material such as wood, cane, plastic or metal.

Angle Rods: These are L shaped rods, usually used in pairs. The sorter arm of the L is held in the closed palm with the long section parallel to the ground and to each other. Typically, when the target is reached the rods will cross indicating the spot.

Wand: This is a single long rod held in the hand and will react with circular or oscillating movements.

Pendulum: A bob on a twine reacts with a number of different movements and is often used in conjunction with charts or over a map for distant dowsing. 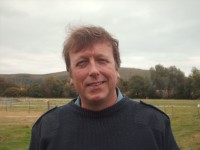 So, how does it work?

Martin Wood earns a living from dowsing. He is known as The Geopathic Property Doctor, and deals with problematic 'Earth Energies' that can affect the health and well-being of both ourselves and animals. www.geopropdoc.co.uk

"Essentially, dowsing is a way of using a simple, non technical instrument to locate something that is not known to us" he explains.

"Most dowsing tools are relatively inexpensive but, when obtaining dowsing rods, go for a simple sturdy design without all the frills, which do little to enhance the rods operation."

"Finding services such as gas and water pipes, telephone and mains cables, sewerage pipes or drainage pipes, will probably be part of a turfcare professional's requirements at some time in his career."

"Take drainage as an example. Much like the process of dowsing for water, the depth of the drainage pipes, and whether it is blocked or broken, can be determined. Indeed, the turfcare professional may have more technical requirements to ask of the rods and could, possibly, be better as a novice dowser than an experienced one who could not focus or understand the technicalities of what was sought."

"Let's cover the basic principles of dowsing. Firstly, get to know your rods. I favour the angle field rods which I manufacture myself from 16" mild steel."

"Be comfortable - hold your rods, firstly with your arms by your side. Raise your arms and rods up until the rods are pointing forward, arms slightly bent at the elbows. If you are holding rods with handles, try to get a balance for the rods so they are not rotating round and to all sides prior to dowsing. Once the rods feel balanced, try to establish a reaction. For 'YES', the rods usually turn inwards and, for 'No', the rods turn outwards."

"What is key to the success of this operation is focus, and this is vital for your rods to react. Whatever you visualise is what your rods will react to. You must be precise with your focus. For example, to find a flowing underground stream, focus on an underground stream coursing its way through the rock or ground."

"Don't allow the rods to become the main focus, they are just an extension of you. Now, slowly walk forward and watch for a reaction from the rods, which should either cross or point in one direction when water is found, to show flow direction. Some people's rods will remain crossed until they have cleared the water route."

"If you have no luck with that focus, then try visualising the colour yellow, it is the colour naturally given off by water. If you manage that, then try determining the depth of the water by asking the question, is the water between a proposed range of depth, e.g. 10-20ft, then continue to narrow the scale until your rods say 'YES'."

"Give it a go, you may amaze yourselves. I once had a lady who could only find water when she thought of kryptonite! Sometimes, the reaction from the rods is so severe and affirmative that many swear the rods have a life of their own. Actually, it is the operator that subliminally moves the rods, even though it sometimes feels as though you have a tiger by the tail. Have fun!"