The English national team praises the grass in South Africa…

The indigenous Kikuyu and Bermuda grasses are subtropical grasses that go dormant during the South African winter which peaks exactly during the weeks of the Football World Championship finals. Therefore the pitches have been stripped and overseeded with grasses for a temperate climate which thrive in cooler weather.

"The interest is huge. It is estimated that the Football World Championship finals will attract 450,000 fans from abroad. And media coverage is enormous. Outside the base camps of the teams, large tents have been put up for the media, and the individual teams have dozens of journalists following them. One of the teams that attracts media attention in particular is England. I spoke with some British journalists who follow Wayne Rooney and his team mates on the English national team closely. They said that the English players spoke highly of the training pitches and the grass. They are very happy with the grass surface which has the correct combination of firmness and bounce to prevent most players from getting injured." 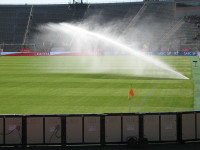 On reflection, the fact that the English players are comfortable with the Football World Championship grass is not so strange. DLF-TRIFOLIUM supplies grass for a number of major English stadiums, including Aston Villa, Chelsea and Manchester United!


Preparing the grass for the Football World Championship

The Football World Championship ball and the fact that it may cause problems for the players in the thin air have been given considerablefocus. But how do the pitches present themselves prior to the Football World Championship? "The South African organisers have had their work cut out for them to ensure that the football pitches live up to FIFA's strict requirements for the many stadiums, training pitches and base camps for the national teams where players will be 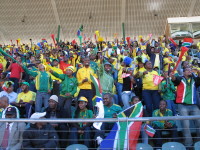 training and where matches will be played.

Even the Football World Championship referees have had three football pitches made available to them. The training pitches of the referees have been seeded with the same grass as the other pitches", says Stig Oddershede who has been delegated by DLF-TRIFOLIUM prior to the Football World Championship finals. DLF-TRIFOLIUM is the main supplier of grass seed for South Africa.

Under normal circumstances, the South Africans are not accustomed to over-seeding their stadiums. The indigenous Kikuyu lawn grass grows well in the hot summer, but the colour fades during winter which is the season right now in South Africa.

During the winter months, sports activities are therefore moved to hard grass surfaces with dormant Kikuyu grass. This will just not cut it for the Football World Championship! The grass surface was therefore stripped from the football pitches in March and a new turf has been established with a mixture of temperate grasses which thrive better in the South African climate.

"We are very happy and proud that the organisers chose Dlf trifolium seed for the job. Several companies partook in the bidding round, but after thorough studies and testing of many different grass varieties, Dlf were selected as the major suppliers. Three of our turf varieties were selected: a Smooth-stalked Meadow Grass, a Perennial Ryegrass and an Annual Ryegrass 'Axcella'. The seeds have been sent to the individual stadiums and the local turf managers have seeded, watered, cared for and nurtured the grass pitches after careful instruction."

"When Denmark played the friendly match against South Africa at Super Stadium in Atteridgeville, the match took place on grass which was mostly provided by DLF-TRIFOLIUM. The 20,000 enthusiastic spectators blew, danced, and shouted themselves through the match using the characteristic vuvuzelas which are almost comparable to the sound of hundreds of foghorns all being activated at once.The noise is massive and so physical that earplugs are definitely recommended," says Stig Oddershede.