by Miranda Chambers
in Industry News
on 15 Oct 2006 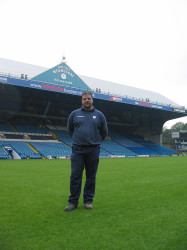 Carl Pass of Premier Pitches carried out the preparation work using the Sand Master followed by the Koro top maker. The surface was cultivated but the Sand Master slits were left intact. Mansfield fibre sand was imported onto the surface and harrowed prior to consolidating to a true surface with a Blec rotary rake. Green waste compost was also incorporated into the fibre sand. A Blec turf maker was used for the seeding phase.

Steve and his team took over the growing in and maintenance of the ground immediately. Their hard work and dedication has certainly reaped dividends.

We were very impressed with the shoot density and uniform cover at the outset. Several games have now been played on the pitch and the sward is still immaculate. We have experienced little in the way of divoting due to excellent root development. The chairman and manager have also been delighted with the pitch and feel this is the best surface we have ever achieved at the club."

"I discussed the seed mixture choices with John Hughes of DLF Trifolium who has provided technical backup every step of the way." The seed was supplied by David Blanchard (Sports-e-equipment) who worked closely with John to provide full support.