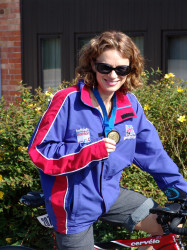 Inspired by watching the Elite Women race the day before, Miranda Harris, Marketing Manager for DLF Trifolium slipped into the cold brown waters of the Binnenalster lake in Hamburg at 8.40 on September 2nd to begin the Olympic Distance World Championships. Racing against 75 women from all over the world in her age group was far more daunting than anything Harris had ever attempted in the UK and once the hooter had signalled the start of the race, she realised she was competing against some ferocious athletes.

The mile long swim seemed further than usual, probably made tougher by an unsympathetic north wind ruffling the waters of the lake, however Harris finally exited the swim and began the long run through transition to her bike. With over 2,400 bikes racked along the Ballindamn high street, it took some time before Harris could shed her wetsuit and begin the next stage on her bike. A keen cyclist, Harris always enjoys this part of the event and the fast, technical 40km course suited her well. Apart from one amusing incident with a camera man trying to capture her on TV, which she mistakenly took for a race marshal, the bike leg was uneventful and passed quickly.

Back on her feet again after another lengthy transition, (adding another 1.5km to the 10km run), Harris soon realised all was not well for the last leg. The run seemed to go on forever and a Paula Radcliffe "pit stop" became necessary. This meant losing a couple of minutes and just missing her target of less than 3 hours.

The cheering crowds on the last kilometre were awesome and the tremendous support for Great Britain helped to ease the pain on crossing the line.

Despite coming home with a total of 40 medals for the UK team, Harris's age group top position was 4th, just proving how tough the competition was. "I found it a really tough race and the build up really unnerved me with over 2000 competitors racing in different Age Groups," says Harris. "Although I didn't quite make my target of 3 hours, I'm proud to have been part of the Great Britain team and its now back to the drawing board to see where I can improve for 2008." Harris has already qualified for Vancouver World Age Group Championships.