Miranda Harris, DLF Trifolium's Marketing Manager has recently qualified for the Olympic Distance Triathlon World Championships which will take place in Hamburg later this year. Miranda had 4 chances to qualify this summer with races at Ellesmere, Rutland Water, Fishguard and Wakefield. The first two races went well, especially Ellesmere which was her first Olympic distance triathlon ever consisting of a 1500 metre swim, a 25 mile bike finishing with a 10km run. The bike course suited Miranda well and her times were competitive but overall she was not quick enough to give her one of the top 4 places necessary for qualification. 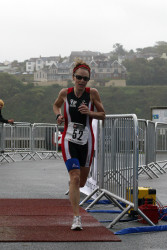 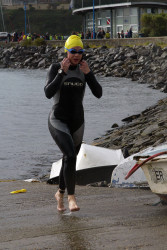 Due to compete at Wakefield, two weeks following Dambuster, Miranda made a last minute decision to race at Pembroke instead due to a smaller field and more chance of qualification. Of the four qualifying races, Pembroke Triathlon is probably viewed as the toughest. The race opened in the sea with a two lap swim including a 200 metre run in between. Then on to a testing bike course which left Fishguard and followed the coastal road to St. David's with a four mile climb to warm up. The two lap course was just under 30 miles, nearly five miles longer than a standard Olympic course. The run, also a two lap course, included a challenging jaunt along the inner breakwater followed by a kilometre climb on to the coastal path, for a further kilometre before retracing the route back to the harbour.

Despite promises of fine weather and a calm swim, Miranda was somewhat disconcerted with the inclement conditions on arrival at Fishguard. Gale force winds and torrential rain made the usually pretty harbour of Goodick, Fishguard look very uninviting. However there was no time to reconsider. A mass start at 8.00 a.m. with nearly 200 competitors and the race was underway.

The first lap went well and Miranda managed to stay with a group of swimmers who offered some shelter in the increasingly rough sea. However on the second lap, conditions worsened and the swimmers spread out. Many of the competitors were forced to slow down in order to negotiate the choppy sea. Out on the bike, and again a reasonably quick first lap but torrential rain and heavy gusts of wind made it impossible to take advantage of any steep descents. Road safety was the main priority to avoid any chance of aquaplaning and Miranda was relieved to finish the bike unscathed. The run was in true character, extremely wet under foot following all the heavy rainfall and hilly but elation soon took over as the realisation of finishing the race became a reality

The winning time of 2 hours, 18 minutes was over 20 minutes down on expected times for an Olympic distance and 14 competitors did not even complete the race. Miranda was pleased with her place of 34 out of 48 women and a fourth in her age group missing out on a prize by a few seconds, however the reward for completing the gruelling event, was a place in the GB team. She will now join a team of 20 female athletes in her age group and take on a field of over 100 competitors from around the world. Serious training now begins!