0 Have you got the best bush?

The art of topiary has been around since Roman times. As well as Europe, it was also popular in Japan and China at about the same time and has remained thus ever since.

In basic terms its all about trimming your bush (keep it clean) to create a growing work of art, and is much in evidence in parks, gardens, stately homes, schools and some golf clubs. 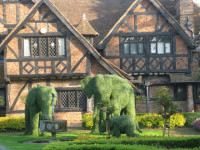 Shaped wire cages are sometimes employed in modern topiary to guide untutored shears, but traditional topiary depends on patience and a steady hand.

The Montreal Botanical Garden in Montreal, Quebec, Canada comprises 75 hectares of thematic gardens and greenhouses. Amongst the exhibits are some splendid examples of the art of topiary; perhaps the most impressive being 'Mother Nature' complete with fountain.

Meanwhile, back in the UK - Richmond-upon-Thames in Surrey to be precise - these topiary elephants are a famous local landmark, despite being hidden behind a high wall and a solid gate. Apparently, the best way to see them is from the front of the top deck of a 65 bus heading towards Kingston.

And, just north of Wantage, at the factory of the Williams Formula 1 team, is another splendid example, showing a pit crew attending one of their racing cars.

Of course, if you've had a fall out with your neighbours, you may also choose to pass comment via topiary, although you may get a call from the 'decency department' of your local council!

So, have any of our members got any examples of topiary at their facilities? We'd love to see them if you have; and feel free to add a few words of explanation.

We'll present a £50 voucher to redeem in the Pitchcare shop to the owner of the 'best bush'.