0 Do you recognise this man? 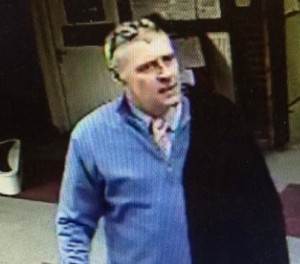 Several golf clubs have joined forces in a unique and ground breaking attempt to catch a criminal who has been stealing from their pro shops in the last few days.

The smartly dressed man has appeared at numerous golf clubs in the Midlands in recent days, and has stolen clothing from the pro shops worth several thousands of pounds.

The police have been notified but as one club was told an officer would not be able to respond for five days, the club decided to release images of the culprit on social media.

It then turned out that several neighbouring clubs had suffered the same crime and had similar images of the same man, and have been broadcasting them since on social media..

Penn Golf Club in the West Midlands was the first to release the images, which it did via its professional, Mark Butler, who runs the Mark Butler Golf Academy, which has its own Twitter feed.

He revealed that the criminal swiped three Galvin Green suits and a jumper after loitering around the Penn pro shop.

His wife Nicky, who also works at the club, said of the police's non-involvement: "They said they were too busy so we're doing it ourselves.

"They know we've got the clear CCTV images but I don't think theft is that important as they get it all the time.

"It's been a frenzy since we put the pictures online, loads of people are getting in touch and some are suggesting this guy has done it before."

See the rest of the article on the following link :-Golf Club Management