0 Do you wallaby starting something?

Looking after an acre or two of turf is one thing, tending 200 acres is another. Which is why the owners of one of Britain's greatest woodland gardens resort to other means than mower machinery.

"We've used various machines over the years, including my favourite, a Dennis," declares Robin Loder, whose family has tended the Grade 1 listed Leonardslee Lakes & Gardens for more than 150 years.

"Given the acreages that we have to manage, we felt we had to look at other alternatives, which, bearing in mind that as a graded garden we have to maintain our environmental credentials, we believed offered a greener solution."

Any visitor to this West Sussex paradise cannot fail to notice how closely cropped the grass is, even out of season. Whatever the measures he's adopted, they seem to work.

"We've not seen a mower working in the grounds for years," Robin confesses, who clearly doesn't allow the grass to grow under his feet.

His solution? Why, wallabies of course. A 'mob' of 50 of the cuddly marsupials, native to New Zealand and in appearance akin to a kangaroo, have enjoyed a permanent residence on site for as long as the Loder family itself. 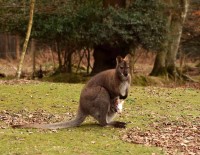 Walking through the upper reaches of the gardens, famed for their stunning displays of spring flowering trees and shrubs, such as rhododendrons, azaleas, magnolias and camellias, you realise what Robin means.

Smooth enough for any of the finest golf greens in the world, the lawns give every appearance of being primed for championship play. "We just leave them to it," explains Robin, "confident that we never need to apply any sort of cutter to the grass. It's all done for us."

The 'mob' has grown into a visitor attraction in its own right, and recently gained world prominence when a host of TV crews travelled to spend time with them earlier in April when the baby joeys were emerging.

BBC 1's hit magazine programme 'The One Show' came down to see for themselves just how effective wallabies can be at keeping grass trim, Robin continues.

"Out came one of our old walk behinds but really there was no contest. The wallabies won hands down. Some of our areas are quite knobbly and undulating, as well as steeply inclined, so using machinery used to prove tricky."

Most of the mob roam around their purpose-built enclosure, which includes sleeping quarters, or browse the lawns and adjoining pastures. You may even spot the odd one relaxing among the bluebells, sunning itself.

Interbreeding has taken hold over the years, with plenty of albino additions to the originally all brown mob now enjoying life at Leonardslee.

As the old ones fade away and die, the next generation of grass cutters takes their place. Springtime sees a welter of baby joeys peeping out of mum's pouch, but they can't spend too much of the day hidden away because there's acres of green stuff to munch on.

Effective as wallabies are at their groundsman's task, some jobs are simply beyond them it seems.

Can they create those distinctive stripes or cross-hatched effects, beloved of so many groundsmen? Clearly, no.

Can they collect waste clippings? Again, no, but they do produce copious quantities of their own organic material.

Can you ride on them and sup a mug of tea at the same time? Alas, no.

Are they the ideal boy's toy? Many would say not.

So, for the foreseeable future at least, turfcare professionals appear likely to still rely on traditional means and methods to maintain manicured sports surfaces. However, if you do wish to test drive a wallaby, you know where to go, because Robin's daughter, Mary, breeds them on her farm next door to the gardens.

"They give me endless hours of fun just watching them potter about," she enthuses. "Judging by the calls I receive, plenty of people in Britain want them as pets. That's fine, but high fencing is crucial because they like to jump."