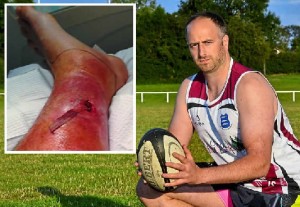 A rugby player who almost lost his foot after picking up an infection from dog mess left on the pitch today urged pet owners to take responsibility for their animals.

Jonny Stiles, who plays for Newport Rugby Club, spent six days in hospital after a small cut on his foot became infected from dog mess left on the field during a match.

Although emergency surgery was able to save Mr Stiles' foot, the 29-year-old has been left with a permanent scar and circulation problems.

But Mr Stiles said despite his ordeal, pet owners were still allowing their animals to foul on the pitch, off Forton Road, and not clearing up after them.

Earlier this month two players had to wash themselves down after landing in some of the mess during a training session.

"It brought back bad memories and I wouldn't want any of my mates having to go through the same thing as I did," said Mr Stiles.

"I got a very small cut on my ankle during a game on the Saturday but nothing that stopped me coming off the pitch.

"I thought nothing of it. It wasn't until the Sunday evening that I started feeling a little pain in my lower leg, but again I just thought it was perhaps aching muscles or soreness from playing.

"When I woke up on Monday I was in agony and my lower leg was all swollen and you could clearly see the cut had got infected.

"I could hardly walk, so I called the doctors and got an emergency appointment. They gave me strong antibiotics and pain killers told me to stay off work and keep my leg raised.

"After 48 hours of hallucinating and a high fever, I was told to go straight to hospital. When arrived at Stafford Hospital I was a bit of a mess to be honest.

"I was diagnosed with an infected blood clot and cellulitis in my left leg, which had spread from my ankle all the way to my lower thigh.

"I was instantly put on IV drip and told I would be in hospital for at least two days. Six days later and after surgery on my leg I left hospital in a wheel chair.

"I spent the next two months recovering, and I had to take a two months off work and spent most of December on the sofa with my leg in the air.

"I have been left with a permanent scar on my leg and also have circulation problems.

"It has taken me some time to recover from the injury and it is only now that I am back fully fit and training again.

Mr Stiles added: "I am one of the biggest dog lovers going and have no problem with the public walking dogs up at the club.

"However dogs are not actually allowed to be off the lead at the club but no one sticks to the rules.

"We just ask dog owners that use the rugby club's area to have some respect and responsibility to clean up your dog's mess and keep them off the pitches."

Please see the original article in the Shropshire Star