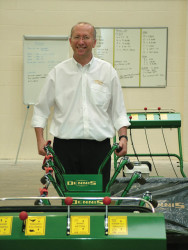 In recessionary times, what often sets one company apart from another is not a knee jerk reaction to a failing bank balance, but a strong foundation built on sound business strategy. Of course, no company is ever completely immune to the sort of deep doo-doo the UK is currently trudging through but, as Managing Director Ian Howard tells our editor, Dennis look well placed to see out the current storm with a new factory, new products and new vigour.

2010 was a challenging year for the sports turf industry, with the current economic climate testing the resolve of many companies, all trying to retain a slice of available markets and remain profitable during a period of uncertainty in the market place.

Quite often, during such testing times, some companies are able to prosper against the odds. One such company that appears to have weathered the storm has been Dennis.

Under the guidance and stewardship of Managing Director, Ian Howard, 2010 saw the completion of their new factory premises (officially opened in June), the introduction of new products and the provision of the lion's share of mowers and technical expertise for the football World Cup in South Africa.

So, how did the company get to where they are today?

Ian Howard explained, "We've always prided ourselves on being a British manufacturer. We are also firm believers in quality control, short production times, and an ability to respond to change and improvement - that's where our roots lie and where we intend to keep them."

In the beginning of 1981 Dennis was going through a difficult time with low sales and went out of business. Ian's father Philip purchased Dennis from the receivers that year and integrated it into Howardson Ltd, the family firm in Derby.

In 1985 Ian joined the company. His engineering background in the gold mining industry overseas stood him in good stead for the challenges ahead.

In 1990, Howardson purchased JP Mowers from Cliftons of Woking, who had bought the company from the receivers of JP Engineering, Leicester back in 1972. JP had been a victim of the Rolls Royce collapse of 1971 as they had been a major supplier of machined components to them.

The JP mower had a reputation as the 'Rolls Royce' of domestic lawnmowers, with many hundreds of machines still in use today. Their range originally covered 10" push mowers through to 24" self-propelled cylinder mowers.

Coincidentally, JP had started producing mowers in 1922, the same year as Dennis.

The JP cassette system, originally designed in the early 1960s, was the basis of the design for scarifiers, verticutters, brushes and a multitude of other options of the Dennis cassette system that is so popular today.

The acquisition was a great boost to Howardson, who saw the potential to fill the gap in the bowls, cricket and golf markets that the traditional Dennis products had never filled.

In 1997, Ian decided he needed to transform the old factory into a new 'fit for purpose' building that offered a clean, modern production line and better working conditions for his staff .

The first phase saw the construction of a 10,000 square feet building which provided an area for production and storage. However, this facility soon reached its capacity and further investment led to the most recent build, which began in August 2009, offering an additional 9,600 square feet alongside the existing factory. 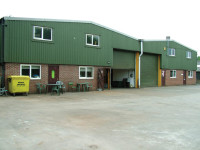 This new building provides a more spacious production line and allows better use of space and storage. It provides a stimulating work place where Dennis employ over twenty staff - "Team Dennis" as Ian calls them. And it is a team effort, from design, build and packaging to transport and final delivery.

"I am very proud of what has been achieved in recent years," says Ian. "Some of my staff have served the company for well over thirty years, and we recently had one of our team retire after sixty years service."

The new factory is not just an assembly plant. Howardson has invested in new CNC machining facilities, allowing Dennis to manufacture many of their own parts, which both ensures quality control and reduces external costs. Staff are trained to multi task, and are able to control and oversee several component stations. New, waist height work benches help make the manufacturing process much easier, whilst increasing productivity.

A recently installed 3D CAM system ensures that the company remains at the forefront of design technology, making them able to react almost immediately to customer requirements. This system has helped the company reduce noise and vibration levels to some of the lowest in the industry.

Modernising the Dennis brand has been an ongoing process. Now, Ian believes, the company is firmly in the 21st century. The major changes at the factory site at Derby have helped to produce a modern, clean effective production line whilst, at the same time, introducing new mowers and products.

It is a far cry from the 'difficult' times of the early eighties. There is a Dennis mower of some type or other at over seventy-five percent of professional football clubs in the UK, and their versatile cassette system has proved popular with groundsmen at bowls, cricket and tennis clubs.

And what of that World Cup order?

"In less than three months we managed to build, test and deliver twenty-seven mowers to the stadia and training facilities at the 2010 FIFA World Cup in South Africa," says Ian proudly. "The mowers were supplied through our partner Smith Turf, one of South Africa's largest dealers, who are based in Johannesburg but have a network of support centres around the country."

"A team of agronomists from STRI were appointed by FIFA as the pitch consultants and were responsible for ensuring the pitches met FIFA's exacting standards. A programme of education days was set up, which required myself and our Sales Manager, Toby Clarke, to demonstrate our mowers to the newly appointed grounds staff."

This was held at the England training camp at the impressive Royal Bafokeng Sports Facility in Rustenburg, 120km from Johannesburg. Over eighty groundstaff were shown how to use the mowers. Considerable time was spent explaining about the aesthetics of pitch presentation.

"The total experience was a fantastic learning curve for 'Team Dennis' and, obviously, brought great kudos to our company," says Ian. "The quality of the pitches produced at the World Cup venues was excellent and a testament to all those who contributed their skill, knowledge and experience using the best equipment and resources available. I'd like to think that our mowers played a major part in the maintenance and presentation at these wonderful stadia."

"We have to keep our name in front of the end users," says Ian, "and, to do that, we attend the national shows at Windsor and Harrogate as well as key shows across Europe. I have always supported them, but, with falling visitor numbers and the overall cost of exhibiting, I feel the industry, as a whole, needs to look at itself and come up with new ways of promoting itself. Whether the mooted 'One Show' approach is right, we will have to wait and see. There needs to be effective dialogue between key players and organisations to agree the way forward."

The company not only attend key trade shows, but organise a series of Dennis road shows every year, demonstrating their wares and expertise at sports grounds up and down the country.

Current sales figures show that 50% of their market is in bowls and cricket, 25% football and 15% ornamental lawn/local authority use. Dennis also exports 10% of their production overseas.

They have also produced a new product brochure showing their full range. I was delighted to see one of my photographs on the front cover, a picture of two of their Dennis G860s cutting the pitch at Wolverhampton Wanderers.

Despite the current economic climate, 2010 was a good year for Dennis. It is down to commitment, time, endeavour and passion, which starts at the top and permeates right through 'Team Dennis'.

FOOTNOTE: On the 5th January 2011, Ian Howard announced that SISIS had become a division of Howardson Ltd and had acquired the respected brand, design, patents and intellectual property of the company, who would now form a new division working alongside Dennis.

The acquisition forms an integral part of the ongoing growth strategy. Ian Howard comments that "combining the traditional strengths of both companies with further investment will benefit present and future customers."