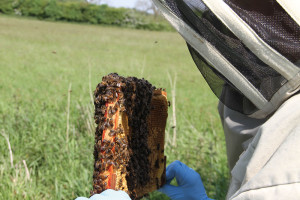 Well, it's that time of year again when my members' focus turns away from the course, if only for a brief moment, and they start getting excited in anticipation of the extraction of honey from our bees.

But let's look first at how honey bees make the honey; a commodity that is so sought after all over the world.

Nectar is secreted by many plants. It is obviously related to the sap which carries nutrients around the plant, and is a solution of different sugars in varying proportions, mainly sucrose. Nectar also contains tiny amounts of many other elements which contribute to the unique taste of the resultant honey. The glands which produce nectar are called nectarines and are usually found in the flower heads, but can also be on other parts of a plant's structure, in which case they are called "extra floral" nectarines.

Bees draw the nectar out and into their honey stomach. On arrival back at the hive, the foragers regurgitate the nectar to a house bee, each bee adding enzymes (invertase) to the nectar from the hypopharyngeal glands in its head. This converts the sucrose to its component monosaccharrides - glucose and fructose. This process also breaks down some of the glucose into gluconic acid and hydrogen peroxide - the latter protecting the honey against bacteria. 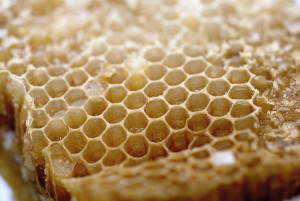 Most floral nectars contain between 50% and 80% water, whereas the average honey contains 17-19%. The surplus water has to be removed so that the honey will not ferment during storage. The house bees regurgitate a droplet onto their tongue, which repeatedly folds and unfolds, whilst fanning their wings to evaporate the water. The workers then paint nectar around empty cells and, using the warmth of the hive and the ventilation currents produced by fanning, the water content is further reduced to about 18%. Only then can it be called honey. It is packed into a cell, which, when full, is capped with a non-porous wax capping by the workers to preserve the honey for later use.

A honey extractor speeds up the process of harvesting honey, but they can be expensive, and this is where being part of a local bee association has its advantages, as they will have one for hire. Extractors use centrifugal force to remove the honey from the frames.

The first thing that needs to be done is to uncap the wax from the honey frames, either with an uncapping fork or an uncapping knife. Remove the wax capping off each side of the frames, then place the frames inside the extractor.

By turning the handle of the extractor (slowly at first) and gradually increasing the speed, all the honey will spin out of the frames, down the wall of the extractor to the bottom, where there is a valve, which opens to capture the honey in a honey bucket below. It is best to have in place some kind of filtering system above the honey bucket to filter any broken comb or loose wax.

After all the frames have been harvested, they can be placed back into the super, put back onto the hive or placed on a stand inside the apiary for the bees to clean. If put back into the hive, the bees will clean any honey still left on the frames, repair all the broken combs and start gathering nectar again to make a new crop of honey. 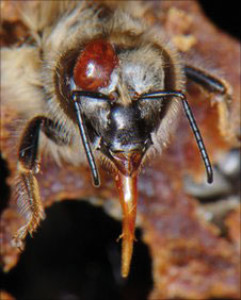 Preparing the bees for Winter

Preparing the bees for winter is most important. The winter bees need to be in good health and have the opportunity to build up their fat reserves to sustain them through the colder weather. A colony will need to be checked for disease - particularly the presence of the varroa mite. If the varroa mite count is high, the colony needs to be treated.

Bees die from damp and lack of food. The hives need to be well ventilated, so that the CO2 and condensation produced by the bees is carried away. Cold temperatures are good for bees. In cold temperatures, they are less active, and consume less food. The warm, wet winters we have had in recent years have been bad news for bees. 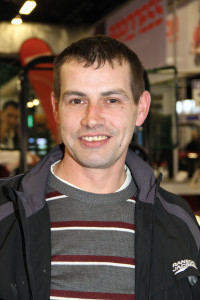 Preparing the colony for winter will include feeding to ensure there are enough stores. If a hive still consists of more than a brood box, the queen excluder must be removed. This will ensure that, as the cluster moves up through the hive, the queen is not left behind to die.

Mouse guards are put in place before any frosts to prevent mice and other small mammals hibernating in the colony. The hive must be secured to withstand wind and inclement weather. It is best, when all preparations have been completed, to leave the bees until spring for your first inspection; even if, on a warm winter's day, you see bees flying, leave them alone until spring.