0 Donald Steel has been elected as the new Chairman for The GTC. 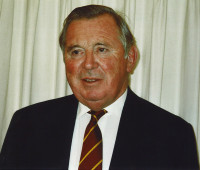 Donald Steel has been elected as the new Chairman for The GTC.

A Past President of the English Golf Union, member of The R&A for 47 years and a world renowned Golf Course Architect Donald has had the most varied life in golf.

Donald says "Golf has brought me into direct contact with hundreds of greenkeepers, a state of affairs for which I have profited greatly".

Donald was the Golf Correspondent for the Sunday Telegraph 1961-90.
President of the Association of Golf Writers 1993-98.

Still active as an Architect Donald has worked on over 100 new courses and advised over 600 clubs.

Donald was President of the British Association of Golf Course Architects 1986-1989.

As a golfer Donald has played to a consistent high standard over many years and qualified to compete in the Open Championship.

Donald adds "every golfer in the world stands to benefit from greenkeeper training and that makes it the game's most worthy cause".