0 Doncaster Knights - King of the Castle

Doncaster Rugby Football Club is a rugby union club representing the town of Doncaster. The first XV are known as the "Doncaster Knights", and play in the RFU Championship. Being the most promoted side in English history has led to massive changes at the Castle Park ground and within the team structure. Lee Blagden explains all to Lee Williams. 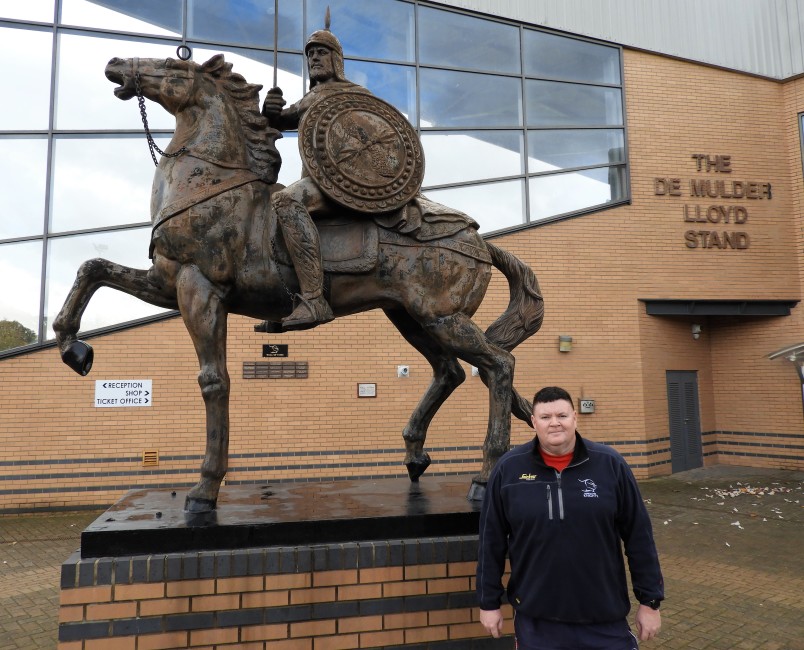 Castle Park Conference and Function centre is a multimillion-pound development and is0ne of the region's top conference venues, whilst remaining a supportive place for amateur rugby in the borough. The club motto - "rugby for all" - sees amateur side Doncaster Phoenix compete at the same ground, as well as the ladies side, Doncaster Demons.

Castle Park is the home of the Doncaster Knights Rugby Union side. Historically, the ground was known as Armthorpe Road, but was renamed in 2000. Capacity is around 5,000. In 2008, the club opened the £3m all-seater De Mulder-Lloyd Stand with a capacity of 1,650.

It's the beginning of November, on a dull, windy, overcast day. I'm at Castle Park to meet up with Lee Blagden, the Head Groundsman who greets me with a warm welcome just outside his office situated in the De Mulder-Lloyd Stand. Before we sit down and chew the fat, Lee takes me for a walk around the pretty impressive and extensive site for a Championship rugby union club who have made their way up the ranks. You can see their ambition is to be plying their trade in the Premiership soon.

Lee's journey to becoming Head Groundsman at Doncaster Knights first started whilst working in a glass factory. "I'd had enough of working all the time indoors. I then worked at Doncaster Rugby League for a while doing kit and stuff. I got a bit bored with that and ended up asking a mate at the time if he knew of any jobs in rugby as I didn't want to leave the sport, and that's how I ended up with the assistant groundsman job here ten years ago."

Lee took the position of Head Groundsman eighteen months ago at the beginning of last season. At the same time, the club were putting a new stadium pitch in. Lee has no official qualifications but has gained certificates from various courses he has attended in the past. "I have learned to be hands on, asking questions of friends in the industry such as Andy Thompson, Head Groundsman at Sheffield Wednesday FC, who is always on the phone for me, and the ex-head groundsman from here, Pete Needham, who is now head groundsman at Doncaster Rovers; they are both a great help." 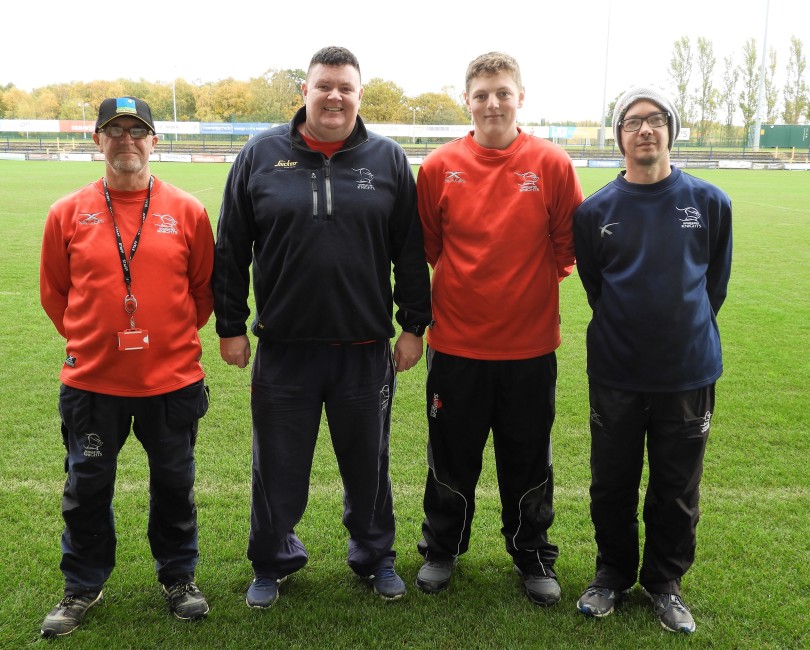 The facility consists of the new Eclipse Hybrid stadium pitch that was installed eighteen months ago, replacing the old rootzone pitch. Lee explains, "With the old pitch being unstable, we had many divots coming up, especially around scrums, which could cause injury to the players. So, the chairman and president decided to invest in a new pitch. A full new drainage system was installed and a fully automated Rain Bird irrigation system consisting of twenty Rain Bird Eagle 950s on the outer and fifteen Rainbird 8005s in the centre."

Whilst on the subject, I ask Lee does he have to use any special methods when maintaining the Hybrid pitch on a day to day basis? "Not really; it is just like most other hybrid pitches. After a game, you need to give it a good clean up, rake it regularly and divot it. The main difference with this pitch, I have noticed, is that we have been putting on a lot more fertiliser. It's gone from a two-weekly application to seven to ten days; the drainage is that good, it's just leeching through the pitch."

The pitch does not have undersoil heating, but they do have frost covers. Lee tells me he would love the club to invest in lighting rigs. "I have looked at the rigs, but at present, they are out of our price range, but this may change in the future with the planned expansion of the stadium."

Alongside the stadium are four full-size sand/clay-based rugby pitches, a new SiS Rugby 60 3G pitch, which was installed ten weeks ago, and four mini juniors' pitches, again sand/clay based. They are also looking to expand the site in the future and build two more full-size rugby pitches.

Lee talks me through the renovation and maintenance regime on the Eclipse Hybrid pitch. "The top gets taken off using a special machine, getting as much grass out of the mat as possible. It's then verti-drained at a depth of eight inches, 150 tonnes of medium sand spread evenly over the surface and brushed in. It's then overseeded with thirty bags of grass seed - a mixture of Perennial and RPR ryegrass cultivars - and a pre-seed fertiliser applied at 35gm2." 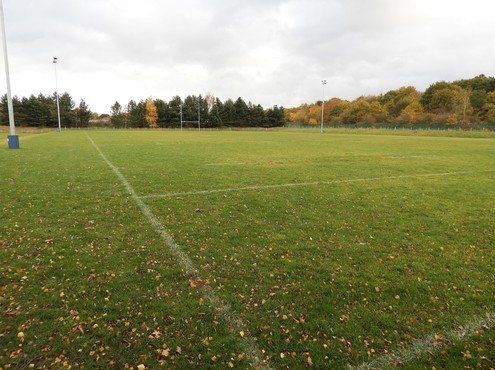 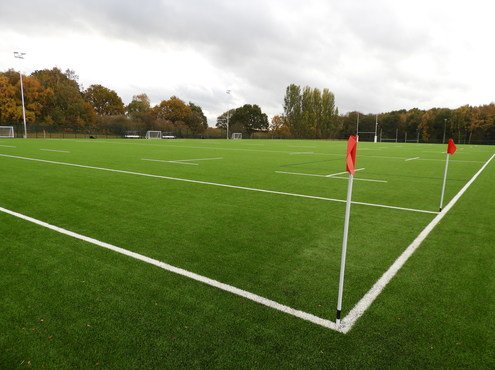 Lee uses the Dennis G860s to cut the pitch on a regular basis at the height of 35mm, twice a day in the summer and, as winter approaches, they will cut when required. As I write, however, they were cutting at three times a week [early November].

He uses an outside contractor to carry out his aeration programme. "We have the pitch Pro-Cored once a month at a depth of five inches, and verti-drained to eight inches three times a season. We do this to relieve compaction, but also to help get our roots down. The last sample I took they were down to seven inches, which I was more than happy with being a sand based construction." He will use the Browns rake to tickle through the surface to help remove any dead grass and debris once a month, then will clean up with the Allett RM34 rotary mowers.

Lee likes to take soil samples from the pitch every six months, which is undertaken by his local sales rep. He will then have a fertiliser programme drawn up from the results and try and keep to it but, with many factors to consider, this can be changed.

"The problem with this pitch is the leaching of nutrients going straight through the pitch, especially with heavy rain. We seem to be using a considerable amount of fertiliser this year, I have been using a three month plus polymer coated slow release product, but it is lasting half that time."

"We use mainly liquids as, with the players going on the pitch training every Tuesday, Thursday and Friday, getting granular on is difficult. I use chelated iron at twenty litres an application, and various liquid feeds with added trace elements and a lot of seaweed. I will also apply a fungicide three to four times a year to prevent any disease coming in. The ground is open, and we have no problems with shade and good airflow, but I like to be safe rather than sorry when it comes to disease management."

The surrounding rugby pitches are treated with a polymer coated slow release product applied three times a year at 35gm2 and topped up with liquid feeds when possible, as the pitches are used heavily throughout the season. 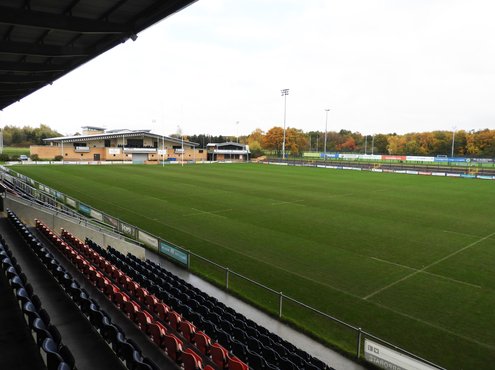 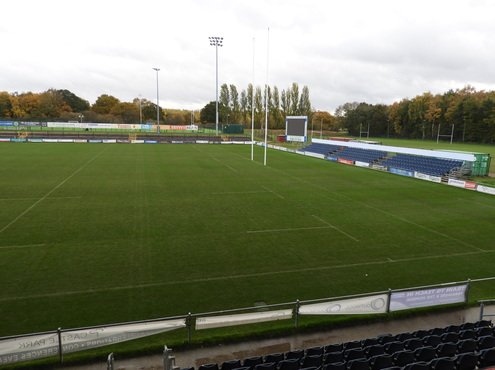 The club like to purchase their grounds machinery outright and have the help of a sponsor as Lee explains. "We are lucky to have Farmstar, who sponsor the club. They have just provided us with a new Kubota B2261 tractor and also lend us machinery when required. They carry out all of our servicing at competitive rates."

Lee is happy with the kit available to him and the team, but would like to demo the new Dennis Pro 34R rotary clean up mower with a view to purchasing when possible. Lee tells me he finds it cheaper to get a contractor to carry out his aeration and spraying programmes rather than invest in their own equipment. It also gives him more time to get on with the other tasks around the extensive site.

When it comes to pest control, Lee has a big problem with rabbits and moles. "It's a nightmare; half the site has a rabbit fence, but they are very good at digging under that. We are looking at extending the fence around the site, and we have people who come in to help control the population. Moles have started to become a big problem lately, so I have a guy who comes in to set traps. They mainly cause us problems on the outer sand/clay pitches."

There are no further projects planned with the pitches, but the club is going to invest in a perimeter fence to help secure the site. "We are going to put up a prison grade fence around the whole site, to protect the kids and adults using the facilities. It will also help protect the pitches from any unwanted use during the week, so we can make them as good as we can. We are looking at expanding our car parks as we have a lot of conferences and events at the club during the week and, at present, we can only accommodate around 100-150 cars." 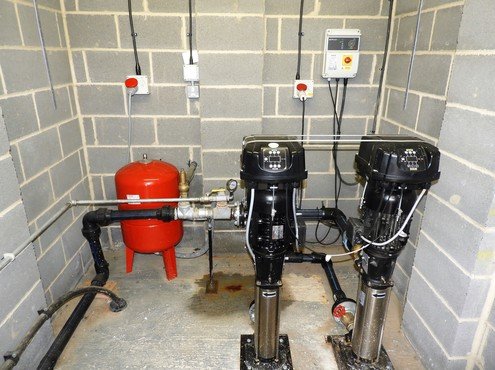 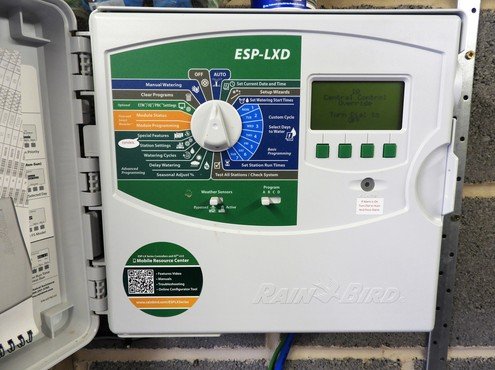 Lee tells me the club are very supportive. They try their best to invest and get what he needs to help improve the facility, as well as funding any training courses that he and his team would like to attend, but this can be difficult.

"I would like to go on more courses and attend seminars, but the problem is time with limited staff available. We had Paul Ashcroft, Stadium Head Groundsman from Arsenal here last year to look at the Eclipse system, and he could not believe how few staff we have for the size of the site."

"I hope to have a catch up with the chairman soon to see if it is feasible to employ two more apprentices, plus someone who can share the workload with me so that I can have a holiday."

I asked Lee what his thoughts are on the industry when it comes to the standard and funding available for pitch improvements and maintenance, especially in the sport of rugby. "The top tier (Premiership) is well backed but, when you look at the pitches in our league, the Championship, there are some brilliant groundsmen out here doing a grand job with little money. I believe there should be a pot of money made available for groundsmen to dip into for help, I know the Rugby Football Union are trying to help with machinery and things, but more could be done."

"As I have said before, I'm fortunate I have a chairman and chief executive who back me, but I know of other groundsmen who could just do with some help financially now and again." 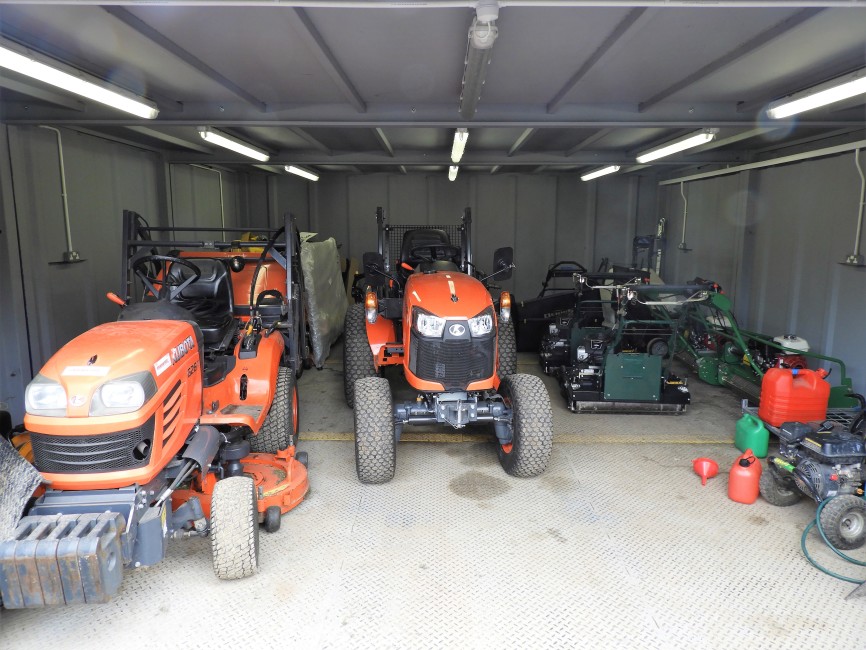