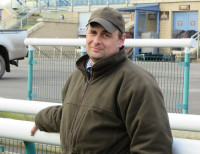 With a hectic programme that includes thirty-six fixtures - twelve over the jumps and twenty-four flat in 2015 - plus responsibility for preparing the grounds for events ranging from a game fair to a tattoo jam, which is the largest event held of this kind within the UK, team work is essential at Doncaster Racecourse.

At the head of affairs is Estates Manager Tim Radford, working closely with Clerk of the Course Roderick Duncan

Doncaster is famous as the home of the oldest English Classic race, the St Leger, plus the Lincoln Handicap which kicks off the flat racing season in March. As it also hosts the November Handicap which brings down the curtain on the flat, just weeks before the jumps season gets going at the Town Moor racecourse, pressure is intense year-round.

"We had a ten day turnaround between the flat and national hunt seasons in 2014," confirms Clerk of the Course, Roderick Duncan. "Preparing the course for high profile flat racing in early spring is a challenge, although we are helped by being sheltered by the Pennines from the worst of wet weather. The soils are free-draining and, on the flat track itself, quite sandy, although the downside to that is that the going can get quick, very quickly!"

He suggests that the key to producing good ground in a season which has been predictably unpredictable for the past four years alone is to 'put it back right' at the end of the preceding autumn.

"We now have a new fertiliser programme in place to encourage germination, and we are looking at using fleece to bring new seeds on, although it's important to avoid producing soft growth which can easily be damaged by low temperatures," he explains. "We also aerate as much as possible in the autumn. It is very important, as it not only addresses compaction but also reduces the amount of watering needed."
Roderick points out that there is now an expectation of 'good' being in the going description for flat meetings rather than fast ground, so effective irrigation is essential. 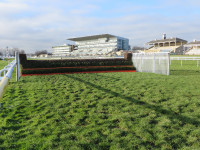 He is also clerk of the course at Southwell, where the busy all-weather programme is complemented by national hunt racing, and where a tow-line irrigation system is used.

"This is my preferred method, although it is labour intensive. However, the scale of the racing surface at Doncaster means we have to use boom irrigators. Whilst outputs are greater and booms can achieve a more consistent application, they are heavy and can cause compaction."

Even with productive irrigators, it is a significant task and can take two days to water the full course. The team start at 4.00am and can go on to 11.00pm, with Tim Radford taking on the early and late shifts so that the groundsmen are not tied up with one job for long periods.

The National Hunt racing programme includes the Sky Bet Chase meeting with its Listed 3 mile steeplechase highlight at the end of January, and Doncaster is a course earmarked by leading trainers to prepare their rising stars for the Cheltenham Festival.

"We can generally produce decent ground, and it is a flat level track, which suits the more galloping type of horse," comments Roderick. 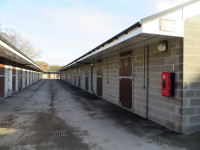 "However, all the northern tracks find it is hard to compete with courses such as Cheltenham. It is a matter of geography - most of the leading trainers are based in the south west. Also, we don't have the facility to cover all of the track if the weather is frosty."

As well as offering the optimum footing, making the fixture list as attractive as possible lures entries from further afield, including a new Mares' Listed Race this season, for which a 2 mile 4 furlong start has been built on course.

In 2006, Doncaster underwent a £34 million redevelopment, including the new Lazarus stand, weighing room, stable complex and lads' hostel, plus some track work, and Roderick comments that he and his team have benefitted from that.

However, recent improvements to the surface over the irrigation ring main mean that the full width of the national hunt track in the home straight can now be used. Hurdles can also be repositioned across the track to take advantage of the best ground, rather than just moved forward or back. 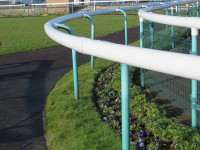 The racecourse is situated in the centre of Doncaster, and within a stone's throw of Sheffield, which brings a captive audience to feature meetings and to events such as post-racing concerts, but also has its downside in the form of vandalism, especially as the centre course is common land with open access. A number of chase fences have been burnt in recent years. Other similarly afflicted courses remove their fences in the closed season or use portables, but Tim Radford is a devotee of permanent steeplechase obstacles.

"We have eleven fences and we get very positive feedback about them from the jockeys," he comments. "I feel that the quality of portables can be questionable and that traditional fences are better for the sport."

With little opportunity for a dedicated renovation period, overseeding is an ongoing process on the flat track, whilst part of the national hunt course is overseeded each year in a four-year cycle. The flat course was also direct drilled last autumn. 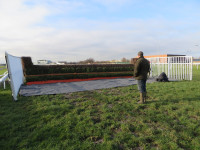 "We use DLF's Pro Master 79, which gives good colour. We're putting on 9-10 tonnes a year, so it's a balance between quality and quantity," explains Tim. "I feel it's better to use a middle of the road product and seed more often; I've looked at some of the expensive low temperature mixtures, but we are getting good germination as it is."

Newbury divot mix is used to repair the track after meetings, with a slightly sandier composition on the jumps course than that used on the flat track. Some 40 tonnes of divot mix can be used after each meeting to ensure that track is reinstated to the required standard, and contractors Turf Services come in handy for repairs at busy periods.

There are couple of pinch points on the jumps course, and Tim comments that using a slightly higher cut - 6-7in - helps preserve the footing, particularly in these areas. The flat is cut to the more traditional 3.5-4in.

Mowing takes place three or four times a week in summer and he admits that it is strain having one man tied up for that amount of time.
"We currently use a Caroni front mount mower with a Trilo blower on the rear linkage, but we are trialing a Wessex RMX-680 trailed tri-deck mower which has recently been purchased for Southwell. It allows wheelings to be controlled by lifting either one of the 8ft side decks and moving the mower across the track, plus its greater output would mean substantial savings both in fuel, tractor maintenance costs and man hours."

A Major roller mower takes on the tough job of cutting the car parks. An agricultural-spec Amazone fertiliser spinner is needed to cover the acreage.

"We use Delta 12:4:8 controlled release fertiliser in summer, with four or five applications every four to six weeks on the track, and Microlite 12:0:12 with iron on the lawns. Activate-R liquid biostimulant, which has seaweed and amino acids gives the flat track a boost, and we've also found Propel-R wetting agent useful."

Long acting winter fertiliser Greenbest 11:8:4 also has magnesium and sugars and can last up to five months.

A slitter is used when conditions allow, with contractors Fineturf engaged to verti-drain before the Lincoln meeting and mid-season. "We have access to a Verti-Drain within the ARC group but, with our workload, it's more efficient to use a contractor," Tim explains.

Two John Deere tractors, a 5720 and 5515, do the donkey work but, with so many formal areas, ride-ons, including a JD 2653A tees mower, and Hayter and Toro push mowers for cutting under the rail are also important parts of the armoury. 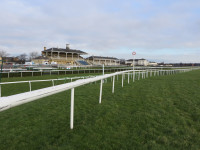 Much of the running rail has been replaced this year, and rail movements are an essential element of presenting optimum going for meetings throughout the year: "We move the rail out on the round course after the Lincoln meeting to save the ground for the St Leger Festival," explains Roderick.

The parade ring takes a battering from horses' hooves and it is an ongoing task to preserve the turf as wash-off water from the placed horses quickly turns it to mud. A smart 'Winners Circle' made of running rail is a new feature, increasing the sense of occasion whilst helping to create a safe area for the large contingent of owners, trainers and press that congregate to celebrate the win after a big race.

However, with so much attention devoted to ensuring that racegoers not only have a good view of the action but also enjoy a great experience in the beautifully tended hospitality areas, due to the diligent care of Tim and his team, it looks like everyone's a winner at Doncaster.

Arena Racing Company (ARC) has created the role of Estates Manager in place of Head Groundsman, which entails directing the grounds team in looking after the entire property rather than just the racing surface.

Tim carried out a similar role at Worcester, but with 10ha of flat track, 8ha on the national hunt and some 4ha of lawns and car parks, it is a huge task at Doncaster and, as part of ARC's management development programme, Sam Parker has recently been appointed as Assistant Estates Manager.

Responsibilities include the maintenance and preparation of 147 stables, with two casuals employed to muck out after meetings and during other events such as Doncaster Bloodstock Sales annual breeze up, where racehorse buyers get to see some 300 potential purchases gallop on the racecourse.

With the course on show all year round, there is no let-up - 3000 pansies and 3000 wallflowers adorn the edges of the parade ring and public areas through the winter.

Hospitality marquees all have their own gardens, whilst balconies to the boxes in the old grandstand are adorned with flowers in summer and no detail is too small - for the St Leger Festival, geraniums are colour themed to the shade of red used in sponsor Ladbrokes' logo.

An agreement with the local B&Q superstore sees plants and flowers secured at favourable rates, and in considerable bulk, in exchange for branding on the racecourse. 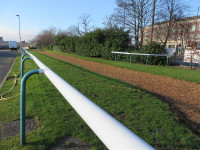 The walkway between the stables and parade ring has recently been renovated with a new woodchip surface and reseeding of the surrounding grass.

Reminders of Doncaster's dual role as racecourse and event centre are everywhere; road crossings by the pre-parade ring have been resurfaced to withstand heavy lorries as well as being kind to horses hooves.

Doncaster Town Moor Golf Club has its course in the centre of the track owned, like the racecourse, by the council. It has its own team, although Tim comments that they help each other out if needed.

There are six full-time groundsmen, plus the two stable staff and two seasonal gardeners and, with the year-round events programme, Roderick comments that the pressure can be intense.

"They are an exceptional team who work very well together. I'm just the administrator!"