Identical twins Stephen and Mark Wiggins have always had a lot in common, but their bond recently invaded the sporting arena when Stephen scored a hole-in-one … one month after his brother. 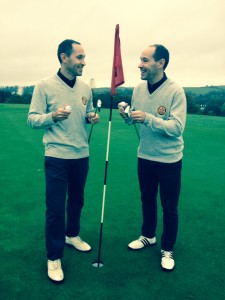 And next time they throw down the gauntlet and play each other, they'll have no excuse for missing their tee-times, as both received limited-edition, commemorative BOSS watches as recognition for their achievements.

Mark, 33, from Lancaster, paved the way when he scored his ace on the 185-yard, par-three 14th, at Lansil GC. He said: "We've always had this strange bond so it was more surprising to everyone else than it was to us - over the years we've always been competitive with one another and it's been fun.

"I managed to beat him in the Lancashire schools table tennis championships when I was younger, and then he went on to win it the following year.

"We then went on to play lots of football together and still play now - he's left-footed and I'm right footed - but golf was perfect for us because it allows us to have mini challenges with one another.

"We were absolutely made up when I got my hole-in-one but then he thought, 'I'm not having that!'"

And Stephen, from Morecambe, followed in the footsteps of his brother when he scored his ace with a five-iron on the 218-yard, par-three fifth at the same club.

He said: "It was an unbelievable moment; Mark scored a hole-in-one in the September medal and I've gone and hit one in the October medal - it's the stuff of dreams.

"I hit a flush strike that pitched and rolled up to the flag into the cup; my playing partners and two guys on the next hole simply couldn't believe it, but it was made all the more special that my brother had scored one last month." 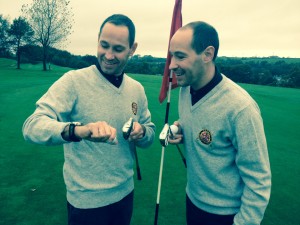 Their competitiveness even pervades the workplace as Mark teaches PE at a local school and Stephen now works at a rival school so they often play against each other.

And now 13-handicapper Stephen and his brother Mark, who plays off 16, have both been rewarded with membership of the exclusive BOSS Watches H1 Club and a specially-commissioned, commemorative timepiece.

The luxury German brand has once again pledged to reward club golfers with an exclusive watch for every hole-in-one recorded during a club competition in 2014 after giving away £600,000-worth of limited-edition mementos in 2013 - and the brothers are among the latest to achieve the feat this year.

The scheme is open to any golfer whose club uses HowDidiDo - a free-to-use, web-based social network for golfers - and anybody playing in official club competitions is eligible. Currently, more than 1,800 clubs use the website.

"To the majority of amateur golfers, recording a hole-in-one will be the most memorable thing they achieve in golf - a once-in-a-lifetime experience probably - and we want to ensure they have much better memories than merely a dent in their bank balance after buying drinks in the clubhouse.

"The exclusive BOSS watch is available only to golfers who record a hole-in-one. It will provide a constant reminder of the achievement and also help to ensure they're never late for a tee-time again.

"We also hope it might add a frisson of extra excitement to club competitions for golfers who may not be in with a chance of winning the event, for they know that every time they stand on the tee on a par-three, they are just one shot away from winning a stunning timepiece."

In addition to the limited-edition watch, the twins are also awarded membership of the exclusive BOSS Watches H1 Club which offers its members access to exclusive benefits and merchandise.