by Neville Johnson
in Public Places
on 06 Dec 2012 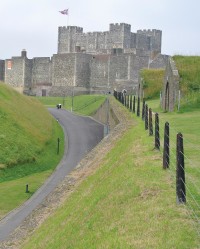 In days of old when knights were bold and lawn mowers hadn't been invented, keeping grass to manageable levels in and around castles and other focal points was a matter of either intense labour or making use of grazing animals.

There's no more scything or shearing by serfs at Dover Castle, but there is now a move back to Medieval times, at least in part, with the introduction of sheep to trim both grass and budgets.

This summer, Neville Johnson visited what is the largest castle site in England to see how man and beast are keeping on top of the grass there

Dover Castle stretches 620 metres inland from the famous White Cliffs. It has, for centuries, played a part in guarding these shores from invaders, having been built by the last successful ones - the Normans. As you approach it, it is an imposing and grand site overlooking the Channel port. These days, as a major public attraction with around 350,000 visitors annually, it is under the care of English Heritage and has been since the organisation was first formed in 1986.

I met Andy Turner, Regional Landscape Manager for English Heritage, whose role covers all landscape and wildlife matters at all its properties across the south-east. Dover Castle is an English Heritage 'flagship' and one of Andy's favourites, alongside Queen Victoria's Osborne on the Isle of Wight.

The first thing I learn is that there is no on-site grounds team. Everything, well almost everything, is handled by a contractor. Grass cutting, weed control, hedge trimming and other landscape work is carried out by Turf Soil of Maidstone, which has been handling work there for two years. Contracts like this are normally for five years and English Heritage has a performance specification for contractors to adhere to when tendering. Andy tells me that Turf Soil also maintains

other sites in Kent, notably Deal Castle, Walmer Castle, and the Richborough Roman Fort. The staff are always thorough and professional, he says. Looking around, it's certainly a mammoth job.

An overriding factor at Dover Castle is the steepness of much of the grassed areas. It was a shrewd move by the Normans putting their Keeps on high. It made you think twice before attacking them! It doesn't make cutting the grass any easier though, and certainly not for a contractor operative and a strimmer. There is a cunning plan though, and it involves crampons and eye-bolts resin-bonded into the outer walls. I watch in awe as one of Turf Soil's men, securely roped to the anchor points, sets about cutting the whole of one side of the 45 degree slope surrounding the Keep. It's a two-man operation, with each operator responsible for his own secure fixing.

In the early 1990s, English Heritage changed its policy in terms of grass cutting. Formerly it was short grass everywhere. Now, it treats each site individually and asks its contractors for a mixture of long, medium, and shorter cut areas, the latter of course principally where the public go. You can clearly see the pleasant effect of different cutting levels - a bit like a golf course's rough, semi-rough and fairways. No need for putting green standard, of course.

"Having longer grass areas is much better for nature conservation and helps to encourage plant and wildlife development," said Andy Turner.

"Also, it discourages people from climbing steep and possibly hazardous slopes - such as there are at Dover Castle in abundance. Here, on a chalk landscape where the topsoil is thin it prevents unsightly erosion scars too. Longer grass does tend to deter the public, we find."

The contractor only cuts the long grass, mostly on the sloping areas, at Dover Castle twice a year. I visited on the day of the first cut, towards the end of July. After the banks have been cut, they are left for a while before they are raked off to let the wildflower seeds drop.

"Things were quite a bit later than usual this year, not because the grass hadn't been growing, but because the wildflowers have been slow in flowering and setting seed," said Andy. 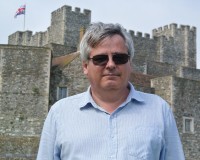 "The cut had to be delayed so wildflowers are not lost. It has been an unusually wet year, to say the least, but we have to respond to Mother Nature and her needs."

"We have regular contact with conservation groups and, here in Kent, we liaise regularly with Kent Wildlife Trust and Natural England on ways of preserving and enhancing nature at our sites. Here at Dover, I think we manage successfully to maintain surroundings very much in keeping with history."

Prior to the introduction of the three-tier grass policy, there had been many an erosion scar on the slopes around the Dover Castle site, caused primarily by over-winter rainfall. Andy says they are a problem no more, though one pernicious wild plant is a persistent nuisance. Commonly called Alexanders (Smyrnium olusatrum), it is peculiar to coastal sites and said to have been introduced by the Romans as an edible herb. Apart from being fairly unsightly, it tends to out-compete grass, especially early in the season and, when it goes over, leaves bare areas susceptible to erosion. It's a biennial, so there is a regular effort to try and stop it seeding by cutting it down, though this is difficult on steep slopes. 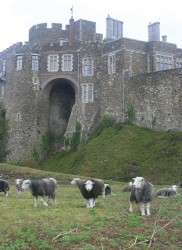 One of the on-going environmental projects Andy has running with Kent Wildlife Trust and Natural England is a recall of how they dealt with amenity grass in the Middle Ages, by introducing grazing on to the site's outer banks. This distinctly aids bio-diversity and would, of course, cut the health and safety risks of men working on steep surfaces. Thirty Herdwicks, a variety of sheep native to Cumbria, which enjoys grazing on tough grasses, are 'employed' to keep the grassed slopes manageable and looking good.

The plan, according to Andy, is to expand the project in time to cover all the site's outer bank areas. This method of keeping grass in check, as well as being something of a cost saver, is almost certainly historically accurate.

There is much visitor interest in the sheep too. For English Heritage, this is a benefit without responsibility because it is the Kent Wildlife Trust that actually looks after the sheep, rounding them up, shearing them and generally ensuring they remain healthy. It is hoped that the Herdwick 'workforce' will be partial to Alexanders as well.

Prior to management passing to English Heritage, the Dover Castle site was looked after by the Department of the Environment. It has been open to the public since the mid-1960s, and was, until then, still a military establishment with separate fully operational army barracks. The medieval fortifications and the marvellous Keep, arguably as iconic and possibly more real historically than the Tower of London, are visitor attractions par excellence, superbly managed and maintained. Daily historic re-enactments never fail to draw the crowds.

Deep inside the famous White Cliffs and extending beneath Dover Castle itself is a vast network of underground tunnels excavated in the Middle Ages. During the Napoleonic Wars, these were greatly extended into military barracks in anticipation of invasion from the French.

Over a century later, they housed a World War II hospital and became the command centre for the 1940 Dunkirk evacuation, which English Heritage has preserved as hugely successful attractions for visitors.

I asked Andy how English Heritage managed to keep on top of the landscape side of things at sites like Dover Castle without interfering with visitor comfort. There were regular public and corporate goings on, surely? Weren't there plenty of days when tidying up surroundings was difficult?

"There are indeed events pretty well around the calendar," he said. "The events section within the visitor operations side of English Heritage has a detailed timetable planned well in advance, and it liaises regularly with landscape teams all over the country. I'm always confident our maintenance routines don't impede the public at all."

At Dover Castle there is no box mowing, hardly any reseeding, and minimal weed control. Keeping the grassy surroundings pleasant, yet not manicured, so clearly adds to the whole atmosphere. What you see is what you get; and you get a delightful and extensive backdrop to one of the nation's most important historical sites.

Another less well-known historic site at Dover is Western Heights, part of which is under the care of English Heritage. The threat Napoleon posed 200 years ago led to the construction of this immense, slightly inland series of forts and ditched defences. It was never actually used, but the number of gun platforms that can be seen give a chilling idea of how serious the threat of invasion was.

Andy Turner and Alan Cathersides, English Heritage's Senior Landscape Manager showed me the Drop Redoubt area, which English Heritage manages. This is the lowest section of Western Heights and one of the two main fortifications.

The other, the Citadel, comes under the jurisdiction of the Home Office. The grounds of Drop Redoubt are open to the public and free to view. English Heritage's guardianship of it includes responsibility for basic maintenance. The surrounding grass is cut twice a year, in July and October, as part of this.

English Heritage gets most of its funding from direct government grants. There is also income from charging entry to most of its properties. As Alan Cathersides says, historic sites like the Drop Redoubt need tender loving care and, if more funds were available, there could be so much more of this.

The building itself is only opened on a couple of occasions each year, and notice of this can be found on the English Heritage website at http://www.english-heritage.org.uk/daysout/properties/western-heights-dover/prices-and-opening-times