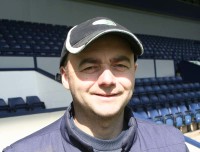 Rob Lane began his 'dream' job at West Bromwich Albion FC at the age of 16, deciding not to enter the family trade of builders. He had applied to several football clubs, including Aston Villa and Walsall, but was eventually accepted at 'The Baggies' on a YTS programme. This was a double bonus for Rob as not only would he be able to fulfil his career ambition, but WBA were the team he has supported all his life.

Initially, Rob was placed on a week's trial and his enthusiasm and eagerness was quickly recognised by the then Head Groundsman, Brian Harris. He attended the local Sandwell College on day release for two years as part of the YTS programme to learn about grounds maintenance and turf care, and now Rob is one of the longest serving, one club groundsmen in the country having been at the Hawthorns for twenty one years, the last twelve as Head Groundsman.

Like the long suffering fans he has experienced the highs and lows of promotion and relegation, between the Championship and Premier League, three times in eight years. The 2008/2009 season has, once again, seen the club relegated from the Premiership and, to add more angst to the situation, they have been usurped by local rivals Wolverhampton Wanderers and Birmingham City. However, from a groundsman's perspective, Rob is gearing himself up for the challenge of getting back into the Premiership next season, and renovations at both the training ground and stadium have been sanctioned without any disruption to the planned programme of works.

Rob has three staff to help him, His assistant at the stadium is David Beard, who was originally on the maintenance staff but moved over to the groundstaff a few years ago, and two lads at the training ground, Jim Bunting and Phil Kingston.

The stadium has a Fibresand pitch with undersoil heating and integral pop up watering system. During the past two wet summers water usage has been kept to a minimum, however, they are looking to tap into a local borehole nearby as an alternative to their metered water supply.

The pitch was reconstructed in 1998 replacing the old soil based pitch. Renovations are based on a rolling two year cycle of work, koroing one year and fraise mowing the next.

Rob likes this regime as he starts with a new sward every other year, which removes the problem of poa annua grasses and fibre build up becoming established in the pitch.

Agronomist John Hacker from PSD Agronomy, consults on agronomic requirements based on a number of soil tests and visual inspections made throughout the season.

Tenders are submitted by contractors for the end of season renovations - this year Mallinsons were awarded the renovation work at the stadium and Boughton Turf Management the training ground. With less than eight weeks until the first match of the 2009/10 season is played at the stadium, it is important to get on with the renovations as quickly as possible. Weather permitting the maintenance is usually completed within five days.

Prior to the work commencing the pitch is sprayed with Ringer to reduce worm activity. Phil Day a local contractor is responsible for the spraying of the pitch. The top 25mm of surface material is koroed off and 300 tonnes of fibresand material worked into the top 75mm of the pitch profile. To help with the establishment of the new pitch the following products are applied:
• 164kg of Vaninoc, a root enhancer
• 3000kg of zeolite
• 100kg of step-high magnesium
• 400kg of pre seeding granular NPK 8:12:8 fertiliser.

The pitch is then laser levelled and overseeded with 14-16 (25kg) bags of Johnson's Premier pitch seed at a rate of 40gm/m2, sown in three passes. Once the seed has germinated, feeding and mowing continues to establish the sward. Fourteen days after germination Rigby Taylor Mascot Microfine 12:0:12 fertiliser is applied followed by further applications every two to three weeks.

Primo Maxx is used at a low rate 90.6lts/Ha) five weeks after germination, with a further two applications in July (0.8lts/Ha) and August (1.6lts/Ha). A 12:0:12 liquid feed and Scotts Greenmaster Blade are also applied to help improve nutrition in the profile.

Rob begins his mowing regime using pedestrian rotary mowers, gradually reducing the height of the sward to 35mm. He will then start using his Dennis G860 cassette cylinder mowers, starting at 35mm and gradually reducing to the match height of 25-26mm. The pitch is aerated every two to three weeks using their SISIS Javelin AerAid.

At the training ground a total of eight pitches are renovated. Jim and Phil prepared the pitches by mowing and scarifying, reducing the vegetation to 12mm. They are then scarified in three passes using the Wessex scarifier/collector.

Boughton Turf Management undertakes the major works, sand slitting, aeration, topdressing, dragmatting and overseeding. All the pitches are vertidrained with a solid tine spiker to a depth of 225mm and topdressed with a medium-coarse sand, using 60 tonnes per pitch.

One pitch was sand slit using a Blec Sandmaster, inserting drainage slits at 50mm centres and 250mm deep. All the pitches are oversown with Johnsons Stadium seed mix at a rate of 20-25gm/m2. With pre-season training beginning the first week of July, it is important to get the training pitches back in play as quickly as possible.

Rob has witnessed a revolution in turf care machinery and products over the past decade and has been keen to embrace these wherever possible to maximise the pitch quality. With football clubs dealing in big money the pressure is on to ensure that the grounds are of the highest standards.

Would Rob work anywhere else? The answer to this is obvious, his longevity of service and his passion for the job is apparent and he hopes to work at the Hawthorns for many years to come.