0 Downland on the up at Hockley Golf Club Hockley Golf Club's 250-acre site includes the original village settlement of Winchester, a Roman villa and some of the most important chalk downland in the south of England. Course Manager, Glenn Kirby, is charged with managing both the needs of the members and the challenging environmental requirements

Hockley Golf Club in Hampshire, founded in 1914, celebrated its centenary last year, but the immense history of the land on which it sits gives it connections to the Iron Age, Romans and Anglo Saxons. The clearly defined evidence of the generations who lived and worked the area in the past, now impose challenges on today's management of a premium golf course, and its surrounding environs.

The vast 250-acre (100 ha) course sits atop Twyford Down near Winchester, which has already suffered the infamous archaeological desecration of cutting the M3 motorway through the chalk hill in 1992. It is still home to features including the original village settlement of Winchester, a Roman villa, 1500 year-old field systems and a droveway that dates back to the Bronze age up to 4,000 years ago.

Marc Dryden, the club's General Manager and the driving force seeking to create a viable and thriving modern golf club alongside its heritage, believes the impressive environmental initiatives and credentials should prove a positive attraction for players. 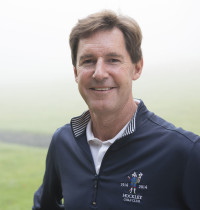 "We recognise that we don't just have a golf course to manage; but the need to look after the incredible archaeological heritage of the site and our responsibility for the invaluable downland environment," he said.

When Marc joined the club in 2011 the course conditions were in decline, with membership falling. He also found it was committed to a Higher Level Stewardship (HLS) environmental agreement, but had fallen behind targets and was failing to deliver the desired enhancements.

"It was crucial that we could turn around both aspects as quickly as possible," he recalled. "There was a clear belief that, to get golf and the environment dovetailed together, would be an attractive proposition, but we knew it wasn't going to be easy."

Managing golf and the environment

One of his first jobs was to recruit a new Course Manager, in Glenn Kirby from The London Club in Kent. Whilst the first requirement was for a good understanding of turf management and improving the playing conditions, it was seen as equally important to have someone passionate about the environment and committed to engaging with members.

Glenn highlighted that they possibly underestimated the complexities of the HLS scheme, and the challenges posed by dealing with the diverse regulatory bodies that have a vested interest in the site and its management.

"Chalk downland has its own unique flora and fauna, but there is only a limited area left that is not managed under intensive agriculture," said Glenn.

"An estimated 98% of Hampshire chalk downland has been lost over the past sixty years. That makes the golf course an incredibly important resource. In many ways, golf can be seen to be protecting downland."

"It creates an entirely different type of course to parkland or heathland, that has had little acknowledgement, but is something that is worthy of greater credit and providing further enjoyment for players."

Now one of the nationwide network of Syngenta Operation Pollinator Champion Clubs, some of the first steps were to undertake environmental activities that also had a direct beneficial impact for golfers, as well as the habitat. Overgrown scrub was cleared back that opened sight lines and improved access to greens, as well as opening the habitat for native wildflowers to flourish and provide the necessary food sources for bees and pollinating insects.

Cutting scallop-shaped areas and tracts into woodland edges has also provided vibrant new habitat for butterflies, but also opened up vistas for golfers to enjoy the wonderful views as far as the south coast. The measures are providing all important feeding and nesting habitat for the beneficial insects.

"We now have a more flexible approach where, providing we meet our commitment to delivering ecological enhancement, it can be married with the desire to improve the golf."

"Whilst we do receive funding for the HLS management, it does not cover the full costs and we need the investment and support of the club members to make it work," he reported. "As they see the benefits begin to take shape, with both environmental interest and course improvements, we can continue and extend the work."

Glenn pointed out that the members had to accept some areas of the course that were out of play being permanently fenced off, which was a challenge given the course was proud of its policy of no out-of-bounds across the whole area.

"We are responsible for everything inside the boundary of the course; it's a matter of getting the balance right between the in-play and out-of-play areas."

"Now that the members have an understanding of what we are looking to protect and trying to achieve for the long-term, for the most part they are enjoying the developments."

Probably the single biggest undertaking is to clear the years of invasive woodland scrub that has taken over on vast tracts of out of play areas, and looking to restore it to traditional downland, with fine wispy grasses and native acid-loving chalkland wildflowers.

Any activities on the designated Ancient Monument sites are severely curtailed to protect the feature below the surface, and subject to strict regulation across the rest of the HLS area. Steep slopes - which give the course valleys their wonderful definition - do seriously hamper mechanical operations. But, by focusing on relatively small areas at a time, the greenkeeping team, along with willing conservation volunteers, they have started to make a real impact.

Furthermore, to keep the scrub effectively in check has seen the introduction of sheep - with up to 150 grazing. Hardy native species, including the Wiltshire and Shetland, have proved especially suitable. Their role is to nibble off grasses and shrub growth; Glenn acknowledges that aggressive coarse grasses that shade out desirable wildflowers are one of the key concerns. The sheep grazing is limited to nine hectares of fenced off
areas.

"We are limited in what we can do to stop woody shrubs, including hawthorn, blackthorn and viburnum. We can't pull out stumps that may damage monuments below, so they will grow back from stumps that can only be ground to surface level," he advised. "We have used some herbicide stump treatments, but with variable results."

One really positive aspect of the scrub clearance has been the recovery of wildflowers, bringing areas alive with bees, butterflies and other insects as a pioneer of Operation Pollinator habitat creation for downland environments.

Glenn has positively expanded the area by sweeping seed from well-established wildflower patches in the autumn, and spreading it on areas of scrub renovation. Scarifying, which would be an aid to wildflower establishment, is not permitted, but results with spreading desirable species of Wild Carrot and Knapweed have been successful, especially where cutting and removal on 30 hectares by a local farmer has exposed bare areas.

He highlighted that this has proven a major saving in seed costs and ensured native species well adapted to the conditions are perpetuated. The plan is to collect and dry more seed to provide a continued source, as well as making seed available to other local clubs. One large patch of Yellow Rattle has thrived at Hockley, and has already been pinpointed by a neighbouring club for seed.

With the HLS project now into its fourth year, Glenn and Marc have prepared a detailed management plan for the next five years, which is now being presented to members. With the help of environmental consultant, Debbie Millar, and in conjunction with Natural England and the Hampshire and Isle of Wight Wildlife Trust, it outlines the route to an objective of 70% open downland with diverse wildflowers, along with 30% mosaic of scrub of varying age.

Glenn reiterated that golfers' acceptance of the time and money spent on environmental work has been made easier with the allied significant improvements made in the condition of the playing surfaces. A full preventative fungicide programme was introduced to protect greens from damage, along with a Primo Maxx programme used intensively in spring and autumn to keep prolific growth in check - although carefully tailored to growth rates to reduce use in summer. Rescue herbicide has been extensively used this season to remove ryegrass and, with overseeding to increase the proportion of bent and fescue.

Hockley Golf Club is already home to many butterflies and other pollinating insects, highlighted Dr Dan Hoare of Butterfly Conservation. Most notably the Chalkhill Blue, but also the potential for even scarcer species, such as the Duke of Burgundy and the Small Blue, he added.

"The enthusiasm to see the golf course as part of the wider landscape and include proactive management to not only maintain, but also enhance the wildlife value of the site is one of the features that sets the club apart."

"We have been delighted to see the substantial progress made in incorporating management for biodiversity alongside the active course," said Dr Hoare, "not least in improving the chalk grassland and scrub habitat, and restoring many areas through careful cutting and grazing."

Caroline Carroll, Syngenta Operation Pollinator manager for turf and amenity in the UK, reaffirms the positive ecological actions of Glenn and the team at Hockley Golf Club alongside managing an outstanding golf course ably demonstrate what can be harmoniously achieved.

"The primary aim of Operation Pollinator across Syngenta globally is to promote and support habitat creation to restore populations of native bees - by whatever means is practical for individual situations. That applies across agriculture, horticulture and golf."

"Our research on the golf course has shown that, in many instances, the use of Rescue and Primo Maxx have proven useful tools to aid better establishment and management of new habitat for bees and other insects - with results that can be achieved faster and more cost effectively to maximise the necessary pollen and nectar food resources."

"However, the project has never sought to be prescriptive to what methods are used, and is by no means linked to product use."

She believes that, with enhanced stewardship of out of play areas proactively managed to deliver the maximum ecological diversity and benefit for the environment, it puts greenkeepers in a far stronger position to maintain the stance of managing the in-play areas of the golf course to achieve the best possible playing surfaces.

"It is in this stewardship context that Operation Pollinator has the greatest value to the golf business, along with making golf courses engaged in the project a more attractive place to play and a positive PR statement for the industry," she added.