by Rebecca Russell
in Local Authority
on 29 Oct 2012

1 Downpours, floods and - to top it off - slashed budgets! 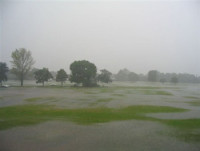 Summer 2012 looks to have been the wettest for a century and Britain's sports grounds, parks and open spaces have undergone some extreme conditions. With the added pressure of budget cuts, those responsible for maintaining these green spaces have been particularly hard done by.

So, how do council parks teams recover from the double blow of the recession and the poor weather? Steven McInroy of SGM Contracts believes a complete review of their machinery fleets would be a step in the right direction.


The period from April to June this year was the wettest recorded for the UK since records began in 1910. Met Office figures for June show double the average amount of rain has fallen making it the second record breaking month this year, with April also topping the rankings.

The large volume of rainfall experienced has meant that grass has been growing far quicker than would normally be expected. Council Parks and Horticultural Service teams have had to prioritise the areas that look the worst after the deluge of rain over the summer, but are increasingly falling behind on schedule because the ground is too soft and wet to be worked on.

In June, Huntingdon District Council issued a news release warning members of the public of the maintenance difficulties caused by the poor weather conditions, saying: "The overall effect of this exceptional wet weather has delayed the completion of each cycle of grass cutting because mowers have to pass several times over the same area of ground to cut the grass to the right length. There is also the additional problem of increasing numbers of locations where machinery cannot gain access to undertake any cutting at all due to the soft wet ground."

Dorset County Council is another local authority to have reported disruption to their grass cutting regimes due to wet weather. Downpours have caused roadside verges in Dorset to grow faster than usual, and Highways teams have struggled to keep up with cutting programmes. Cabinet portfolio holder for transport, Peter Finney, said: "We have done our best to keep on top of the cutting programme, within reduced resources, but the elements have worked against us. Some people would prefer to see the roadsides a bit tidier."

"With additional budgetary pressures and increasing public expectations, the excessive rain couldn't have come at a worse time for council parks teams," said Steven. "We noticed a definite shift in market demand as our public sector customers adapted to poor conditions, both financially and climatically."

The challenge of working within limited budgets has certainly been escalated by heavy rainfall in recent months.

In a recent Market Report published by the Association for Public Service Excellence (APSE), 74% of respondents agreed or strongly agreed that 'the squeeze on public sector resources is affecting parks disproportionately'. Almost 90% of respondents expect the parks budget to change over the next year and of these, 86% presume there will be a decrease in revenue and 72% expect a reduction in capital.

In a bid to create cost savings in the provision of grounds maintenance services, many local authorities have reduced their number of cuts over the growing season. Some councils previously cut grass areas no less than 18 times a year using conventional triple cylinder mowers or out-front rotaries. But now, with limited funding available, the number of cuts is being reduced to as little as 12 per year, leaving as much as 20 days between each cut.

Reduced cutting regimes, combined with damp conditions, means that certain areas become overgrown and untidy. As local authorities struggle to keep up with public expectations whilst working within reduced budgets, SGM has seen an increase in hire contracts. "By hiring machinery, instead of purchasing, councils can ensure that they regularly update their fleet without additional expense," says Steven. "Customers are able to choose from a spot or long-term hire arrangement at a fixed price with all servicing, maintenance and breakdown response built in, so there are no hidden costs. Hire contracts enable customers to improve cash flow and release capital for other, profitable uses. Furthermore, as the machine will not be listed as an asset, their balance sheets will feature fewer depreciating assets." 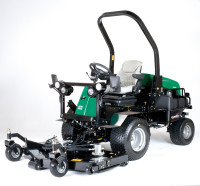 Councils are not only changing the way they acquire machinery but also the actual type of machinery they are using for grounds maintenance.

Simon Richard, agent for Reform, Shibaura and Muthing, implies that choice of equipment is vital to ensuring essential grounds maintenance gets done to the satisfaction of all concerned: "I would suggest a large part of the solution is to re-assess the machinery fleet in terms of value, performance and functionality. The general public will continue to demand a reasonable level of open space maintenance in return for their taxes, and the ability of local authorities to achieve the two objectives of delivering cut quality at less frequent intervals will be greatly increased by taking the decision to increase the level of flails mowers as a percentage of their groundcare machinery stock.

"Not only do rotaries and flail mowers generally cost less to purchase, but they also cost less in maintenance, particularly grinding the cylinders and adjusting the bottom blade. Furthermore, the quality of cut afforded by flail mowers has increased so dramatically over the years that these machines are no longer kept for the rough areas. Smaller, lightweight versions are also finding employment on golf courses and cricket wickets."

Flail mowers are now widely seen to be a more suitable option for working within reduced cutting regimes. "A reduction in frequency of cuts per year, possibly in the order of fifty percent, will inevitably result in the need for grass to be cut when both longer and wet. The flail is far more effective and efficient in longer wet grass 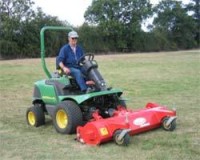 conditions as the discharge area reaches the full width of the machine," says Simon Richard.

Unlike their cylinder counterpart, flail mowers do not grab and throw any debris to the sides of the mower during cutting, making them particularly useful for cutting within tight spaces, such as roadside verges or close to buildings.

Flails are normally Y-shaped or half-Y shaped leaving a ridged or combed over appearance which resembles the striped finish created by cylinder mowers. With the choice of rough, fine or smooth cut heads, the flail mower is a highly versatile piece of equipment, offering cutting solutions for all types of surfaces. According to Simon, the main benefit of the flail option is "the ability to deliver very acceptable surfaces in all grass conditions and at a fraction of the cost of the alternatives."

Steven McInroy concurs: "We are finding discussions with customers are now very much based on cost reductions and efficiencies. The capital cost of a ride-on with a flail is significantly lower than that of a cylinder mower and this, together with reduced maintenance costs, has a significant bearing on the annual hire costs for our customers."

However, Steven is fully aware that the solution to achieving cost efficiencies in current circumstances is never just a simple case of changing to a different type of machine: "For any process of change to be successfully proposed, the outcomes projected and then implemented, measured and monitored, accurate and complete information is fundamental. Specifically for the groundcare/parks department of a council this means attaining complete and accurate fleet records, which in many cases do not currently exist."

It is fair to say that, with the current economic climate combined with bouts of bad weather hitting council open space and horticultural service teams particularly hard, many local authorities are taking a fresh look at how they manage their machinery fleet and source equipment. With increasing pressures on local authorities to be accountable for the decisions that they take, any operational or financial change must be backed by accurate and verifiable information.

Steven McInroy concludes: "With the recent pressures on councils to maximise efficiencies and adopt a transformational approach to managing and delivering services, whilst coping with the challenges of poor weather, authorities must resist the temptation to move forward at haste without considering the long-term outcomes."