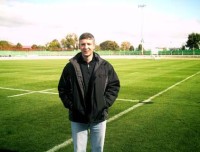 Dr Colin Mumford has joined Sweepfast Ltd, the synthetic surface maintenance specialists, in the role of Technical Manager. Colin has been involved in the sports turf industry since 1989.

Originally a green keeper, Colin left his position as Head Green keeper at North Weald Golf Club in Essex to return to full-time education. During his extended studies he gained a BSc (Hons) in Landscape and Amenity Management from Writtle College, as well as an MSc in Sports Surface Technology and an Engineering Doctorate (EngD) from Cranfield University.

Colin recently returned from Palmerston North, New Zealand, where he was the Technical Officer for the research and development department of the New Zealand Sports Turf Institute, which exposed him to a variety of artificial and natural turf sports surfaces.

Colin has presented at national and international conferences, and has had several papers published. He has also written numerous articles for trade journals, such as the New Zealand Turf Management Journal, Greenkeeper International, and Pitchcare magazine.

Colin's primary role at Sweepfast Ltd is to assist in the assessment and development of the current range of Sweepfast's services. Colin will also be introducing new services, such as Sweepfast's Performance Testing Service.

Remarking on his new appointment to Sweepfast, Dr Mumford said "This is a very exciting opportunity for me at Sweepfast. The company is very progressive and dynamic, and I am looking forward to providing some input into the new product development at Sweepfast".