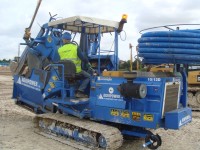 Following a highly competitive tendering process, leading sportsturf contractors Agripower Contractors have been chosen to install a bespoke drainage system for Clifton College, Bristol. Agripower's in house labour and plant combined with their ability to provide a high quality service was certainly a key factor in securing the contract.

The site had previously suffered with serious waterlogged pitches which resulted in numerous cancelled games after periods of rain. Agripower undertook a detailed consultation which included a topographical survey and designed a comprehensive new playing field drainage system accordingly.

The survey discovered that the surface was littered with stones close to the surface, which was causing the problem with drainage. A Mastenbroek trencher was first used, but it became apparent that because of the amount of stone in the surface a rock wheel trencher would be needed.

The Mastenbroek trencher was then used again after the rock wheel trencher to 'clean-up' the drains which were drained at 7.5m centres and liberally sand dressed. The contract also included the re-grading of the pitches which were then levelled using laser guided equipment as well as all seeding and cultivation of the sports ground and the installation of a new cricket wicket.

"Once again the Agripower team have so far provided a high quality service", said Head Groundsman, Andy Matthews. "After the works are completed the new pitches will allow the students from Clifton College to use the schools comprehensive sporting facilities throughout the year come rain or shine".

The new drainage solution should now ensure that cancelled games are a thing of the past.