0 Drainage works near completion for Wanderers

The Bolton Wanderers Eddie Davies Football Academy in Bolton has recently undergone the phase 2A of its construction by the Cheshire branch of Souters Sports Ltd.

The club initially invested over £3.5 million in a 40-acre facility which is ideally situated close to the Reebok Stadium, which includes four full-size grass pitches and one of the largest 3rd Generation synthetic pitches in Europe.

Richard Norton, Grounds Manager at Bolton Wanderers and who has been at the club for nearly twenty years, brought in Professional Sportsturf Design (NW) who were the consultants and Souters Sports won the contract to carry out stage two of a contract that originally started in 2007.

Before the second phase project started it was discovered that there were some weakened foundations on the Thirlmere aquaduct running through the site which prevented the works being completed in this phase. Works to the aquaduct are to start in mid October which will allow the last area and phase three to be completed next year.

"Firstly the top layer of the surface was stripped off and drained at 3 metre centres," explained John Bowie, Site Manager for Souters Sports. "The areas that we were able to work on were then cultivated, laser levelled and a 75mm application of sport sand was applied for amelioration into the existing topsoil. A final level was then achieved using a laser controlled dozer before seeding with BSH A20 mix and an application of pre-seed fertiliser.

Contract Manger for the project Mark Higgs explained "The project was not without its challenges, not withstanding organising the logistics for delivery of the vast quantities of sand required, we had to make sure that we provided a safe traffic management plan and implement it so as to avoid disturbance to the local traffic and residents.

As is always the case these days the weather gave us a cause for concern when we lost two weeks work on site due to heavy rainfall, but we never felt we had to get the job done until the conditions were right." 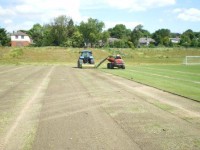 Mark added: "It is always a pleasure to work with professional people who understand the elements and soil conditions. All of the works were closely monitored by John Hacker from Professional Sportsturf Design (NW) and Richard Norton and his team to make sure all works were completed within the timescales allowed and to the full and correct specification."

"The whole team from Souters have done an excellent job and we are very satisfied with phrase two of the works," says Richard, who oversees the grounds staff and all works at The Reebok Stadium, the training ground at Euxton Lane, Chorley and the academy.