Malcolm Magrath, Head Groundsman at Ashton Town Football Club on the problem of having too much water and not enough money!

When I first joined Ashton Town it was in the commercial and fund raising area. However, with clubs at this level it's necessary for everyone to 'muck in' and I found myself gradually being drawn more and more into pitch maintenance.

At this time the Pitchcare website proved to be a Godsend though I suspect there may have been much tutting and shaking of heads from the more experienced personnel on the message board over some of my questions! It seems we were guilty of one or two bad practices. However, since the only equipment we had was an old Ransomes Mastiff, it was a case of 'beggars can't be choosers'. The pitch was constantly being rolled and, given that we had worm casts, added to our problems.

During season 2005-2006 it became apparent that we had a problem with standing water in certain areas of the pitch but, as we were in the middle of the season, there was little that could be done. Once the season was over I set about some remedial work and believed that the problem had been resolved. However, the very wet season of 2006-2007 proved otherwise.

So, it was back on to Pitchcare for more help. Here I met David Goodjohn from GSB Sportsturf Consultants who came out to have a look at our facility and provided us with a detailed report which, amongst other things, suggested the installation of sportsturf drainage.

In the interim period our problems continued, so drastic action was required. We borrowed a mini digger off one of our contacts and dug a trench along one of the existing drains where we believed the problem was. Gallons of water flooded to the surface! Consequently, we replaced a section of the old drain with some perforated pipe to, at least, see out the season. Well, something had to be done!

Obviously, the installation of sportsturf drainage had to be a priority. The cost of this was phenomonal. Funding options were sought, but it was getting to be a bit late in the day if we were to manage this for the forthcoming season. Fortunately, a generous benefactor was found at the eleventh hour and Danvic Turfcare were commissioned to undertake the work.

Richard Sharrock and his team were lucky with the weather during the installation period, though on the afternoon that they finished we had an absolute deluge. Apparently, a month's worth of rain fell in seventy-two hours. Talk about a baptism of fire - except this was water!!!

Anyway, the job is now done and we hope to keep our postponements to a minimum this season. 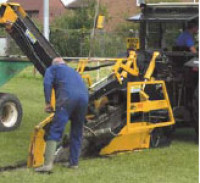 Following on from this work things seem to be heading in the right direction. We now have a bit more equipment including a John Deere 2520 compact tractor, a Sisis Quadraplay and a later model Ransomes Mastiff.

An autumn/winter feed was recently applied (3:10:5) as well as some Activate R to encourage root growth. As I write it has, again, been quite wet in this part of the country and the grass seems to be growing at an alarming rate which, I hope, is indicative of a healthy turf. There are still one or two areas of the pitch that I'm not entirely happy with but, like I said, we seem to be heading in the right direction. Time will tell.