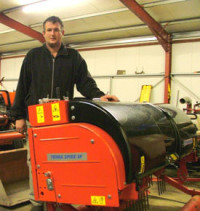 In just five weeks since taking delivery of a new deep aerator, Dean Jones, head greenkeeper at Flackwell Heath Golf Club has seen a dramatic improvement to the rootzone on the greens and fairways at his course on the outskirts of High Wycombe in Buckinghamshire.

Flackwell Heath has a total of 600 members and is celebrating its centenary this year. The 18-hole 6211 yard course has a par of 69 and is steeply undulating situated close to the M40 motorway.

It has an underlying gravel and chalk sub soil and the previous aerator was only able to penetrate to a depth of 60mm (2½"), but since taking delivery of the latest Wiedenmann Terra Spike, the XF, Dean has consistently achieved 230mm (9").

"We took delivery early in October, and after just five weeks, we have already have roots visible down at 120mm," he said. "The speed of the XF has allowed us to get around all the greens and six fairways to date and we've been aerating greens in an average of 20 minutes.

After seeing the machine at Saltex, Dean went to neighbouring Temple Golf Club for a demonstration, then contacted his local dealer PA Turney and trialled the machine at his own course.

"I was impressed with what I saw at Temple, but wanted to see how it coped with the conditions here. Not only is it quick, but it has minimal grease points, so it's easy for daily maintenance. It provides a very smooth ride for the operator, but best of all, it gives a very clean finish, which means minimal disruption for members," he added.