This season, the football ground has looked "its best ever" following a radical end-of-season renovation carried out by Ecosol Turfcare, so it was not surprising that the local authority felt encouraged to see what could be done to achieve a similar improvement on their sports facilities. 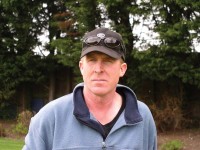 The company also operates the Drill n Fill aerator, and it was this piece of equipment that Martin Mansfield felt would be just right for his poorly draining bowls green which was often closed following heavy rain.

"It's an old push-up green made out of clay," Martin told Pitchcare. His team had religiously hollow and solid tined the surface to a depth of 2" and he had introduced vertidraining to 9" for the past two years, but the green remained prone to ponding.

With frequent surface water following two really wet summers, the green was not in the shape Martin and the members would have liked. "Grass growth was poor with predominantly meadow grasses instead of Fescues and Bent," he said. "Poor drainage led to a vicious circle of problems. After a heavy downpour, we would have pooling on the surface, but there was no alternative, so we'd have to close the green for two or three days as the whole thing would resemble a huge mud pie".

Vertidraining, frequent scarification and verticutting were actually compounding the problem, and the aftermath of poor drainage went on and on. The biggest issue, he said, was that members couldn't understand why the closures had to be so prolonged in the middle of the bowls season. When the flood disappeared from the surface, members thought it would be okay to play on but, in reality, the surface would drain no further than one inch depth and the green was "puddingy" for up to three days. "Then compaction would make everything worse and round we went again, with some very disgruntled members," said Martin.

Keen to avoid another summer of discontent, he called in the Ecosol Drill n Fill aerator in mid March. "I'd seen it work to good effect in the United States, and felt it could be the solution we were looking for," he said . Employing a backfill mix of 80:20 Leighton Buzzard sand and Sportslite, the Drill n Fill went to a depth of 13", creating a web of long-lasting drainage ducts which allowed the water to percolate through the clay. 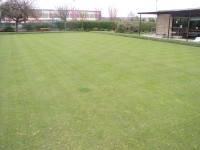 Sportslite soil amendment is a pure, non-chemical soil enhancer, which is EU approved for use in organic applications, and the properties of this completely natural porous mineral offered the enhancements that fell in line with Martin's goals.

It temporarily entraps nutrients within the rootzone for maximum uptake by the plant and thus optimises grass growth, thanks to its very high cation exchange capacity (CEC), which is five times more than the average clay based amendment.

This retention and re-presentation of nitrogen and potassium from fertiliser prolongs their availability to the plant and reduces the loss of these and other nutrients through leaching. After Drill n Fill aeration, Martin dragmatted and overseeded the green to take maximum advantage of these properties.

Martin added "Sportslite can also help soil to resist compaction, and that can only be positive on a surface that gets such concentrated areas of wear."
"Perpetual play from mats in the same spots leads to very distinct areas of damage. If I can create a more resilient playing surface, I will be able to retain the grass quality for a longer period and possibly right through the season".

Martin has a vast wealth of experience managing fine turf, having worked for many years on golf courses in the USA as both a superintendent and as an advisor - and he believes experience is invaluable in being able to take any facility forward, "In the States, there is an attitude of zero-negativity, whereby the philosophy is: "no matter what the issue, we can overcome it!" This was fine in some situations and funds were frequently forthcoming to solve problems - money was rarely a problem. However, he found that some problems were tackled using very complex, radical or misguided "solutions" when far simpler techniques and practices were overlooked.

"I remember one golf green that had new turf relayed on it three times at vast expense - and each time it failed to survive more than a season. The problem wasn't the grass - it was the aeration practices. Only after the third failure was there an admission that something else might be more appropriate." 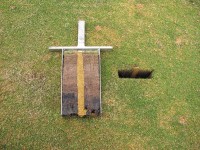 This broad depth of practical experience puts Martin in the fortunate position that he does not always look for the most high-tech solution - the bowls green at the County Ground being a case in point. Installation of a new land drainage system appeared as a front runner but failed to account for the high water table, never mind the considerable cost and disruption. The Drill n Fill option offered a more suitable solution, providing all the necessary water removal traits and leaving a surface that was playable this season - not 4 or 5 months hence.

The "floating" drill head ensures a consistent drilling depth, which can be varied according to the exact needs of the turf, while the fluted tungsten carbide drills ease into the turf to the maximum drill depth of 13", folding back the grass without the compaction-inducing impact of other systems.

Soil amendment is put directly into the rootzone, thereby holding open the drainage channel, giving extended duct life and facilitating nutrient exchange between the amendment and the grass roots.

Martin Mansfield was impressed with the Ecosol operation and members were very positive about such a proactive procedure. His plans are to vertidrain this autumn, scarify heavily and then use one more pass of the Drill n Fill.

For the past three years, Martin has looked after six greens owned by Swindon Borough Council, two others under contract and one privately owned green, and is keen to employ the Drill n Fill on some of these. He said, "Since I took over, we have used the whole turf manager's arsenal on these greens and flooding is the only issue left now. I feel that Drill n Fill is an investment to avoid both longstanding and future problems."

Ecosol has a good track record and many satisfied customers in the bowls world.