by Charmian Robinson
in Industry News
on 23 Jan 2011

Harry Jurgens, Managing Director of AFT Trenchers, has completed the vintage car rally from Peking to Paris. The route, through eleven countries, took thirty-six days to complete, and with plenty of adventures along the way.

The idea of driving through crater-sized potholes in Mongolia, or being pelted by stones in Iran, would not strike most people as the typical trip of a lifetime. But, for Harry Jurgens, Managing Director of AFT Trenchers, taking part in a recreation of the 1907 Peking to Paris Rally has been the stuff of dreams for twenty years.

The sixty-three year old Harry is now back from his 10,000-mile adventure. Not only did he and his navigator, Peter Van de Zilver, make it back in one piece, they managed it all in a vintage, wooden-wheeled, 1925 Buick.

Preparation was the key to their success. Before the race, Harry explained their plan of campaign, "We are taking part in the 4th Peking-to-Paris event that retraces the steps of eleven pioneering automobile adventurers in 1907. We will be 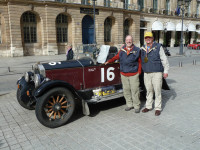 starting in Peking on September 10th, 2010 and driving more than 14,000km over rough terrain for thirty-six days to reach Paris. We will be traveling in a 1925 Buick Roadster, which has been restored specifically for the event." Turn index finger in a clockwise direction close to temple!

Over 100 years old, the race has come a long way from its first year. Today, all the cars are tracked along their route with Skytag, a specialist in vehicle location and tracking system. "Despite modern technology, there was still a lot of work to do," said Harry. "Fortunately, the Buick is built to withstand prairie and desert conditions and, although we believed it to be the ideal choice for the Peking to Paris route, it still required a little (or rather a lot of) TLC before it was considered race worthy."

Essential repairs to men and motor!

Additional work to the Buick included installing comfortable bucket seats in front and restoring the springs, transmission, differential and chassis. In addition, both drivers had undergone a rigorous training programme over the previous year.

Many who know Harry well will have seen and admired the strength of character and sheer will power which motivated him to give up smoking, attend punishing fitness sessions several times a week and transform himself into a fitter, leaner man to cope with the trials of a challenging six week race.

Peter Van de Zilver was navigator and had quit his job as vice-president of a large American firm to take part. He has been a friend of Harry's, and fellow vintage car aficionado, for many years. They first met in high school in the Netherlands, and a mutual love of fast vehicles drew them together. Whether it was a car, a motorbike or a moped, the two boys were obsessed with making the wheels turn as fast as possible. Peter's mechanical skills, and their mutual fearlessness, meant that they were both looking forward to the challenges ahead with equal enthusiasm.

Harry said, "I had every confidence that we had the skills and experience to cope with whatever the journey would throw at us. Buick's were always very well built and I imagined that, in 1925, the road conditions in the American mid-west were very comparable to those in Mongolia and Kazakhstan. In fact, as it tur

ned out, they were far worse, especially in Mongolia where you basically have tracks, which, when lorries use them, get worse and worse until somebody starts a new one. You gamble on which set of tracks looks the freshest and set off. Some of the potholes were so large that you could have got an entire car in them."

Incredibly, the pair's trusty Buick kept going without breaking down or requiring a tyre change for 9,000 km, leaving many of its competitors in its wake. By that point, the pair had made their way through several countries including Uzbekistan and Iran, with mixed reactions from the locals.

"Mongolia was a delight to travel through," said Harry. "The people were extremely friendly and curious about our presence. Russia was just exceedingly beautiful and challenging. Iran, though, was quite intimidating. We felt compelled to get through it as quickly as possible. Sadly, we were warmly welcomed by the over thirty-fives and pelted with stones by the younger generation."

The first potential disaster struck in Turkey when the car's last spare rotor arm gave up. Having already got through five replacements, H

arry and Peter were stranded and had to camp out in the wilderness. But, such are the vagaries of life, they managed to find a local man who, bizarrely, happened to have a 1935 rotor arm which fitted the Buick, and they were able to carry on.

It was in a mountain pass between Italy and France that their luck finally ran out. The gearbox packed in, which proved fatal. Not to be outdone, and having come so far, Harry called on two volunteers from AFT Trenchers, who 'willingly' travelled all the way to France to assist the Buick and its intrepid occupants.

The car was lifted onto the back of a trailer for the final leg to Paris, where Harry's tired and battered 1925 Buick was unceremoniously pushed across the Parisian finish line. In so doing, Harry and his navigator became the only

participants to cross the chequered flag in their original vehicle, albeit with a helping hand from several onlookers!

It is only now, a couple of months later, that Harry, who described the experience as a 'whirlwind', is starting to recall the event and to feel a real sense of achievement. "I admit I really enjoyed it," he said. "It was a self indulgence and although Jackie's [Harry's wife] enthusiasm was not very great at the beginning, she graciously relented when she saw how important it was for me. She is very happy that I am back safe and sound - and so am I, to be honest."

In taking part in the adventure - through which they raised £5,000 for Parkinson's disease research - Harry missed several family events, including two birthdays and his daughter's graduation. "I will, no doubt, be arranging something extra special this Christmas to make up for it," he said with a rueful smile! "But, it was worth it!"