by Laurence Pithie MG
in Consultancy
on 15 Apr 2007 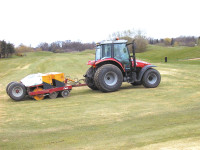 The prolonged dry summers of 2003 and 2006, along with some very high temperatures, once again proved a challenge in producing good turf conditions on many courses throughout the UK.

Successive and previous dry winters and below average rainfall have not only led to water use restrictions in some parts of the country, but it has also tested many Course Manager's ability to deliver a satisfactory product.

So, what can be done to limit the effects of a prolonged drought? Firstly, it really comes down to the basics of grasses and soils. Annual Meadow Grass is the most susceptible grass to suffer from drought, since it tends to produce shallow roots and, therefore, relies on periodic water for sustainability.

Unfortunately, it is one of the most common grasses found on our greens, tees and fairways, especially on parkland and woodland style courses. The more indigenous grasses such as the Fescues and common Bents are far more tolerant of drought conditions, and it is these grasses that are the ideal, but the growing environment has to be correct to favour these grasses. Smooth Stalk Meadow Grass (Kentucky Blue) is both hard wearing and drought tolerant but is slow to establish and not so common on fairways in the UK.

Perennial Ryegrass is the other most common grass found on UK courses, especially in England, but earlier types are coarse and require reasonable amounts of both fertiliser and water to survive. Playing characteristics are of poorer quality and generally require more input to achieve an acceptable surface. The newer dwarf and fine leaved varieties, however, are both hard wearing and drought tolerant and, when used in mixes for tees, surrounds and fairways with Fescue and Bent, do produce good and sustainable surfaces.

Plant breeders have developed a newly introduced grass to the UK called Rhizomatous Tall Fescue and this has been used around bunker edges and banks which are prone to drought and erosion. It has the capabilities of surviving hot and dry summers, although its leaf structure is coarser than the more traditional grasses in the UK.

With regards to soils, and strange as it may seem, in terms of drought conditions, the most important aspect is that the soil must have good drainage to enable the turf to put down a good root system. Poorly drained soils that are prone to waterlogging are also susceptible to turf loss. Natural free draining soils are ideal for growing the preferred indigenous grasses but the heavier clay soils can also be drained to accommodate the desired species.

Maintaining greens during periods of high summer temperatures and prolonged drought can be stressful to both the turf and the Course Manager. The loss of water from the turf (evapo-transpiration) can often be greater than the irrigation system is capable of supplying, therefore other aspects of turfgrass maintenance have to be at a premium.

Effective drainage has already been mentioned and the need to eliminate any compaction and reduce thatch levels to a minimum are of paramount importance, irrespective of existing grass species. Varied depth aeration along with varying forms of scarifying, verticutting and brushing etc. will allow for greater root development as well as improved passage of water to the underlying root-zone.

This also has to be carried out in conjunction with top dressing, using either pure sand of a suitable quality or within a mix containing compost, peat or soil. This will help to keep the surface open and to further dilute any remaining thatch. In essence, good rooting forms the foundation of a healthy and drought tolerant sward.

An effective and reliable irrigation system is also a must but the key is to supply water infrequently, but thoroughly enough, to water the root-zone. Little and often applications of water will eventually result in shallow rooting and thatch build-up. Natural rainfall does not fall in this way, therefore neither should irrigation! Hand watering is still the most effective method of directing water where it is most needed but it is more time consuming and labour intensive.

Other aspects that can help during periods of drought are the use of wetting agents or penetrants. These can be applied monthly via a sprayer and then followed up via the use of a hand held hose gun containing a soluble gel or tablet. It is important that the surface be needle-tined, micro-tined or sarel rolled prior to such applications in order for the water to penetrate the root-zone effectively.

Other management techniques include the height of cut being raised by around 0.5 mm and cutting less frequently, especially the perimeter cut.
Rolling instead of mowing can be beneficial but care must be taken not to over-compact the surface. These actions reduce the stress to the plant and allow more of the plant to function.

With regards to feeding and the use of soil amendments, the golden rule during drought conditions is to avoid using products with a high salt index such as ammonium sulphates. These products 'suck' the moisture from the soil and exacerbate the situation, often leading to dry patch. Foliar feeds containing low levels of Nitrogen and medium levels of Potash mixed with seaweed extracts give gentle encouragement to the plant as well as stress relief. Seaweeds are rich in Cytokinins (plant hormones) and aid the grass plant during these difficult periods. 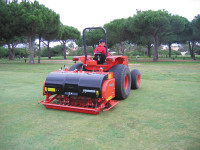 Other products or 'tank mixes' containing Magnesium, Calcium & Humic Acids are all beneficial in relieving plant stress. However, it is the basic fundamentals that need to be put in place and the many products on the market should be regarded as merely 'additional tools' and not seen as an alternative. The use of a growth retardant containing the ingredient trinexapac-ethyl has also helped by redirecting the plant's growth downwards into the root system which, in turn, leads to improved drought tolerance.

A common symptom of summer stress is the increased likelihood of disease, namely Anthracnose, followed by Fusarium, particularly towards the end of the season. This is due to the weakened cell wall structure of the plant after heat and drought stress. The previously listed products help to alleviate this stress and improve the health of the turf. If the disease attack is sporadic then spot treatment with an approved fungicide mix will suffice but, if not, then a blanket spray will be required. Chemical control however is not the solution and the growing environment has to improve by adopting the practices previously listed.

Where turf loss has occurred on greens following drought damage, it is a case of aerating, over-seeding and top dressing as well as raising the height of cut and then ensuring that the seed has sufficient moisture and nutrient to germinate. On tees the remedy is similar but, in many cases, the likelihood is a build-up of fibre just beneath the turf. Here, the addition of scarifying will be required. Many tees suffer from poor irrigation coverage, ie centre row positioned heads as opposed to side positions.

Greater amounts of water are wasted and corners or sections of tees are often missed. On sand based tees, there is often a build-up of thatch, since cultural practices do not keep pace with this build-up and feeding programmes tend to be greater than what the turf requires. 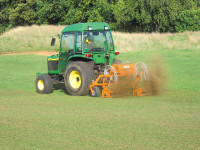 On fairways, turf loss can be quite dramatic in severe cases. The reasons for turf loss are usually a combination of fibre build-up, compaction, poor root depth and less desirable grass species. High soil temperatures and a lack of oxygen will lead to poor root depth and place the turf at greater risk from drought stress.

Over-feeding and, in some cases, over-watering, accompanied by insufficient aeration are the usual reasons. How many courses plan to deep tine or scarify their fairways each year? The old 'agronomics vs costs' syndrome often occurs here and it is when weather conditions become severe that any shortcomings are usually highlighted. To overcome drought damaged fairways or greens surrounds the key is to scarify deeply to remove as much fibre as possible.

Since large amounts of debris are likely to be removed from the surface, a sweeper/collector will be required, although smaller amounts can be blown into the semi rough. Slit-seeding should then follow and ideally be lightly covered with top dressing or sand to give the seed maximum protection and the best opportunity for germination.

Good seed to soil contact is essential and, in many cases, a repeat application will be required the following year.

It is often said that a good drought helps to get rid of a lot of unwanted rubbish. Although the loss of grass cover in any situation is bad, much good can come out of it and it should be seen as an opportunity to improve the composition of the sward.