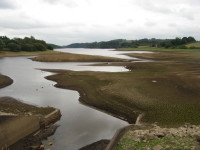 Despite the wettest April on record we are still heading for drought! Historically, we have always relied on our reservoirs being refilled during the winter. However, two unusually dry winters has left reservoirs, aquifers and rivers well below normal levels in many parts of the country.

The start of the drought was largely restricted to the south east of the country, which has been in the grip of the worst drought in 30 years since last year. This is now spreading across large swathes of the country, with rivers such as the Tern, Sow and Leadon at their lowest ever recorded levels and the river Lathkill in Derbyshire drying up, requiring an emergency rescue of the fish.

In an effort to preserve water supplies seven water companies covering south-east England and East Anglia implemented hosepipe bans commencing in early April and the Environment Agency are warning water use restrictions may need to be imposed as far north as Yorkshire if the prolonged dry weather continues.

Despite recent rain the drought has continued to spread with official drought zones being declared in a further 17 counties in mid April, coupled with the warning from the Environment Agency that water shortages could now last until Christmas!

Environment Secretary, Caroline Spelman said "As more areas of the UK move into drought it is vital that we use less water to protect the public's water supply." With the population of the UK now well past 60 million and heading towards 70 million pressure on water supplies is only going to continue to increase, whether it rains or not. Prudent use of water will be expected by everyone to try and avoid future shortages. The authorities are actively promoting a number of initiatives, including the use of recycled water wherever possible, to assist the efforts to avoid future water shortages.

Golf courses need to ensure they are environmentally responsible and yet many continue to 'waste' up to a million litres per course undertaking the (necessary) task of washing-off golf course maintenance equipment using mains water. This raises the question of why, for example, is a tractor being washed-off with potable drinking water when recycling wash-off systems are available?!

Installing a Waste2Water system ensures you can continue with necessary equipment cleaning operations even during periods of drought.

Installing a Waste2Water System could not be easier. The company will custom design the operations area, often retro-fitting into an existing area to minimise the budget. The Waste2Water Recycling System removes all contamination risks, massively reduces water usage and can be used all year round. Add simplicity of installation, ease of use and the low operating cost and you know you've made the right choice. Just give us a call and we will do the rest!