1 Drought may cause long term problems

Drought may cause long term problems

Our biggest problem with this summer's record drought is the fact that all our playing fields are gravel based. Though we have the luxury of free flowing surfaces in the winter we become extortionately dry in the summer.

We have limited irrigation facilities in most places - simply taps and hoses and we can only irrigate one pitch at a time. The lack of watering facilities throws out completely the feeding balance of the grasses. It also hinders us dramatically in that it would be a waste of money to over seed and top dressing is abandoned because the material just blows away when it dries out.

We managed to do two of our pitches properly but we couldn't touch anything else because we couldn't move the irrigation away from the first two renovated surfaces.

The consequence of that is tremendous die back of the sward. We managed to keep a lot of the rooting going by applying powdered sugar across the surfaces with minimal water available which has just about kept the roots alive, but the other pitches are still struggling like crazy.

So, when the boys got back on the field again in September, the surfaces were kicked to pieces in no time. What roots were left were kicked out so, at the moment, a lot of our pitches already look like the end of winter. You have to be worried when the playing fields look like they're coming to the end of the season rather than trying to get through the start.

With the colder weather upon us we are not going to be in a position to do any reseeding now either, we don't have the facility to put germination covers on the football pitches because they are in use most of the time.

With the recent rainfall I have put down a dual feed with a slightly higher nitrogen content than I would normally use at this time of year. I have added that with sugar to try and get the last bit of energy into the plant to strengthen it up for the winter before it becomes dormant. I've put it on all the pitches both rugby and football. 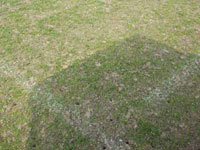 I'm also getting ready now to put on a 0:0:64 feed throughout the winter which is a slow breakdown feed to try and keep as much natural minerals in the soil as possible. I will add to this a magnesium elemental feed to try to keep the grass feeding.

If you get enough magnesium into the soil it helps the roots feed at a few degrees lower than normal.

We have a borehole on the school site and the total drop in groundwater levels this year since we measured in February is 76cm. We will need an awful lot of rain to get it back up to it's previous level.

We also have to be mindful that as the soil starts to absorb rain, we stand a great chance of the ground cracking. We could end up with a wet top and a very loose bottom.

On the aeration side we have a Wiedenmann so, as soon as we can, we will get the ground open to get fluid down into the base. We can get the machine down 150mm-200mm deep. In the summer, we got very little in the way of surface cracking because of the sugar contents that we used. It kept the roots very strong and healthy so they managed to hold the ground together quite nicely for us.

We did have some problems with the levels, but there was very little we could do. Towards the end of November we are going to do some hollow coring across the rugby and football pitches. We will knock the cores back in to try and increase the airflow throughout the soil structure.

On the cricket side, we had a better season than we expected. We've still got a complete pan at about 100mm, which has been caused by years of aerating at that depth, this means we've got a nice platform of clay on top with nothing holding it to the floor. We are going to remedy that with deep drilling to 450mm and also using the Wiedenmann. We won't fill the holes, just knock back in what we take out. I won't dress with loam either this time, I'll use a bio-mass to increase the bacterial activity lower down. Perhaps I'll put on a light loam dressing in the spring to bring the top structure back into status.

I would describe this year's wickets as being fairly responsive, probably about 45% of energy still carried through with the ball, which is not the target. I like to set it up around 60/70% for the boys at this standard of play. Once we get through the 100 mm air layer and get the turf much stronger we will get to that sort of percentage.

The air layer is a critical problem. There is nothing holding that top layer of clay, so movement in the soil structure will dissipate the energy in a cricket ball very quickly. Consequently, the ball won't come up as you'd expect it to. On the other side, of course, if the ball does hit a point which hasn't got a lot of air below, it will get what we call a tennis ball bounce. The ball will fly up in front of the batsman, which can be incredibly dangerous. 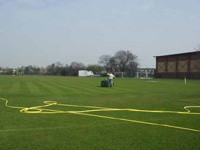 This is a prestigious school and, understandably, they want the pitches to be in the best possible condition. This year, I am pleased to say, they have been very understanding of the problems. We have moved forward, and we are researching ways to stop this happening again. We are looking very seriously at irrigation systems to give us control. With the new water regulations due in 2005, we know we have to do something. We have to cut down on the amount of water wasted and the only way we can do that is by implementing a proper irrigation system. We will then know we are using 100% of what we've got effectively.

I estimate that with what we use at the moment on normal tap head sprinklers, about 60-70% of the water is wasted. There is no even flow rate. With directed power I will be able to get on 3 to 4mm at one go, reducing the evapotranspiration as the core temperature of the soil is reduced. Equal balanced watering will encourage the plant to feed correctly. And, of course, there is the additional benefit of being able to irrigate at night.

We are looking to put a ring main into the field with 11 hydrant points to take power cannons, which we set off travelling, and our two master pitches (one football, one rugby) to have 16 heads fitted in and around them.

At the moment we have water points to the cricket squares, but these would be covered by the power hydrants as well. The whole field will have the facility to be high power watered. The cannons have a 73 metre spread with the complete irrigation of a pitch in under 2 hours whereas at the moment it is taking us up to 3 days. With a new system we would be able to irrigate the whole field in 2 days. The water would still be drawn from the main, but overall we will be reducing the amount of water we use.

The dedicated irrigation at night means we don't have to put nearly as much on, and the distribution will be much more even. At the moment, with the spinning head sprinkler, we can have 16mm in one area and 38mm in another, giving inconsistent growth patterns, which affect growth and subsequently ground levels. We are unable to extract water from the river Longford at the back of the playing fields, because it is man made, and the cost of drawing from the borehole is just not practical. It is easier and more cost effective for us to draw straight from the main.

Another problem with the dry ground has been the constant stone rising. Fortunately, the Amazon flail mower can cope with most of what comes through, but we have had to replace a few bottom blades on the cricket mowers.

Normally in the summer months, our gang mowers are out twice a week - they have been out just twice since June. They're back in the garage now for the winter. The Amazon takes over with all winter cutting because we get grass collection with this particular machine, which is critical.

We don't want any mass on the surface because we don't want to build up the thatch. I've already got a weak sward, the last thing I want is a disease problem. There is already a lot of knotweed to deal with, which we will scarify out as much as possible before a selective herbicidal spray next year.

Next spring all of my grounds team have an eight week ban on holiday leave while we try and rebuild the damage from this year's summer. If all goes well, we will have everything in place to be able to move forward. I don't think we can take to many years like this one.