20 DryJect to revolutionise the concept of aeration

DryJect to revolutionise the concept of Aeration

Aeration is the key to a successful sports turf surface; turf professionals, be they in a golf or sports situation are all too aware of the problems associated with a compacted, anaerobic, poor draining profile.

The armoury of machinery available on the market provides a fantastic choice to be able to carry out surface, shallow and deep aeration at prescribed intervals throughout the calendar year.

Much of the aeration that is carried out is also often combined with some type of soil amendment, usually sand or soil, but sometimes fertilisers, microbes, zeolite or other remedies.

Even today the option to really get these amendments into the soil structure has been simply to spread on top of the surface and brush in. In terms of sand/soil additions this is less than efficient and actually leaves material in the base of the sward that leads to layering and its associated problems. For other soil amendments the efficiency can be even less and again, the turf professional is left to wait for these products to be broken down and make their way to through the soil to reach the intended target-usually the root system.

All that said and done, the machinery involved in spreading top dressings add to that compaction and often close the very holes that are trying to be filled.

As a Head Groundsman at Wolverhampton Wanderers, my staff and I would spend days filling vertidrain holes with kiln-dried sand, poured from watering cans, an idea that was borrowed from Steve Braddock at Arsenal. In those backbreaking days, we would probably cover an area of a few hundred square metres. This operation was usually done on the worst draining areas of the pitch. Due to the length of time taken, we would limit this to an annual operation. 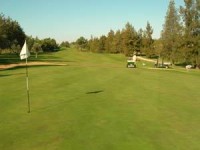 Then imagine that the machine is pedestrian and it weighs only around 250 kg's. Before I take you any further, remember the machine operates pretty fast as well, in fact an average 500 square metre green can be injected, brushed and mowed and be ready for play in an hour and a half.

With three machines working in tandem it's possible to have all the greens on an 18-hole course treated and back in play in a day. In fact, if the front nine greens were closed in the morning and the back nine done in the afternoon, it allows golf play to continue with virtually no disruption and loss of revenue.

Three machines will also allow the complete sand injection of a football pitch take place in a day, even the day before a game.

The DryJect machine is available on a contract-by-contract basis, and prices are based on the spacings asked for on the machine. The machine will operate at three different speeds, depending on the closeness of the spacings.

The closer the spacing the more material is required, but many clubs tend to settle for the mid range spacing.

Well you can understand my willingness to hop on a plane to see this machine in action at a golf course in Portugal. With their trained operators, the whole operation is seamless; I watched green after green, injected, brushed and mowed with approximately one ton of dry sand per green. Each green was back in play within an hour and a half of the operation starting and the trueness of ball roll immediately after the mowing was excellent. There is only a small percentage of sand left on the surface and this was brushed into the sward leaving a near perfect surface.

The company showed me greens that had been DryJect'd two weeks earlier and it was almost impossible to see that the machine had been on the greens, despite the non-growing season.

I felt that the water would possibly cause some problems, but the greens dried out within half an hour or so of the machine finishing its work.

Nearly all the material is injected into the hole and fissures left by the water injection. This stops the air space from being closed again, allowing increased air movement and improved water drainage rates. The filled fissures also allow roots to penetrate easier and the quicker degradation of black layer found in anaerobic conditions caused by over compaction and poor drainage. 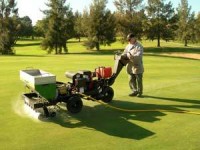 It is a variation on the Hydrojet, using high-pressured water injection to blow a hole into the profile; almost simultaneously an injection of dry sand is then blasted in filling the cavity left by the water. The DryJect aerates three dimensionally-side to side, front to back and even connects hole to hole.

It is a revolutionary concept using powered water - a patented Venturi process - to open the soil for air, water and amendments in high volume without disturbing the surface.

DryJect allows you to start a soil modification program even as part of your regular aeration.

The following observations were made by Ed McCoy, School of Natural Resources, Ohio State University. 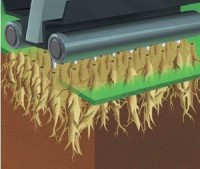 In other words the DryJect injection causes "heaving" of the soil surface but since it is only 1.3 mm, it is virtually imperceptible. Continued use of the DryJect will cause some degree of increased density during each application, but again there will not be any long-term detrimental effect.
Another aspect not considered in these simple calculations is the heterogeneity of soil density created by the water pressure fracturing and sand interfilling. This is where this and similar treatments have their greater effect (my belief). By injecting a channel in the soil and filling
with loose sand, there will be areas that become more dense but also areas that are much less dense. This heterogeneity benefits a sand-based soil in just the same way that soil aggregates and structure benefit a native soil.

But as deep-tine aeration and Hydrojecting are well accepted practices that do not remove material but serve to fracture the soil.

The added benefit of DryJect is that material is injected to stabilize the fractures.

Also, DryJect offers a minimally disruptive approach to increase sand incorporation into greens. The current recommendation following Bob Carrow's work and some recent articles in the USGA Green Section Record speak to the need for 40 to 50 cubic feet of sand per square metre per year. A large amount that is not achievable by coring and frequent, light topdressing alone. 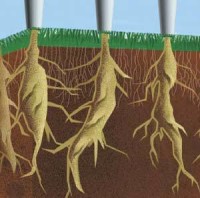 But, what practices must one perform to maintain a green at or below this 4% by weight (some have said 3.5 to 4.5%) number? Well, there are two basic steps (although no single experiment has been conducted to jointly test both). The first is to disrupt between 15 and 20% of a green's surface each year and the second is to apply a total of 40 to 50 ft3/M of topdressing sand each year.

Depending on tine spacing and diameter, the percent of surface areas disrupted by coring can range between about 1 and 10% each pass. For example, a coring operation using 5/8-inch hollow tines at 2-inch spacing yields 5% area disruption. Another method to disrupt the surface is Graden dethatching which, with 1-inch spacing and a 9/64th inch blade disrupts 14% or with a 5/64th blade disrupts 8%.

Consequently, coring twice a year alone, would typically not meet the 15% minimum whereas using a Graden twice a year would meet or exceed the 15-30% range. So, with regard to surface disruption, Graden dethatching can replace core aeration, and, as it has been reported, with less disturbance to play.

The bigger problem in organic matter management is applying 40 to 50 ft3/M of sand without burying the turf in any one application. Carrow seemingly accomplished this in two ways. In the first, he core aerified (2X yearly) Graden dethatched (2X yearly) and surface top-dressed every 3 to 4 weeks. This delivered approximately 48 ft3/M. In the second he Graden dethatched (5X yearly) and surface top dressed every 3 to 4 weeks. 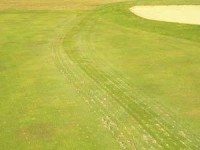 This delivered approximately 49 ft3/M. In his study, each core aeration delivered 9 ft3/M, each Graden dethatching delivered 8 ft3/M, and each surface topdressing delivered from 1.5 to 0.75 ft3/M. [Note, others have reported that a coring operation followed by topdressing delivers 18 ft3/M. Also note that in season quad-tine and Hydrojet applications were made during the course of this study.] 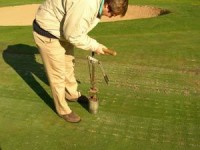 Now suppose DryJect was employed in Carrow's first scenario instead of coring. That is, DryJect twice yearly, Graden dethatch with topdressing twice yearly and surface top dress every 3 to 4 weeks. With DryJect delivering 4 ft3/M compared with coring at 9 ft3/M there is a net reduction of topdressing on the order of 10 ft3/M per year. With Carrow's total at 48 ft3/M per year this would yield 38 ft3/M per year; still approximately within the 40 to 50 ft3/M per year range. And with the Graden delivering 16% surface disruption and DryJect delivering 6% surface disruption this gives a total of 22%, a workable solution. So can coring be replaced entirely? Well, it seems so. 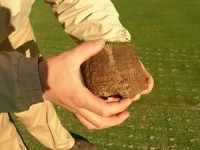 Yet, a third argument can be made using these numbers to incorporate DryJect into a sound organic matter management scenario. Suppose in Carrow's first scenario DryJect was used instead of Graden dethatching. That is, core aerify with topdressing twice yearly, DryJect twice yearly, and surface top dress every 3 to 4 weeks. With DryJect delivering 4 ft3/M compared with the Graden at 8 ft3/M there is a net reduction of topdressing on the order of 8 ft3/M per year. With Carrow's total at 48 ft3/M per year this would yield 40 ft3/M per year and fall within the 40 to 50 ft3/M per year range. The percent of surface area affected would be 16% due to both the coring and DryJect operations.

Finally, it is important to remember that 15 to 20% surface disruption and 40 to 50 ft3/M of topdressing are not the overall goal of surface organic matter management. These are simply perceived methods to achieve the actual goal of maintaining no more than about 4% organic matter in the surface 2-inches. If a management scenario using DryJect can accomplish this target, then it doesn't really matter how one got there.

DryJect is now available in the UK and Ireland, for further information on costs and availability please e-mail mail@dryject.co.uk or call DryJect UK on 01902 824392.