To play a round of golf at the Four Seasons Golf Club in Dubai Festival City, Dubai, in summer, you will need to drink 9 litres of water. "Half a litre a hole," says Course manager David Brinkel. "In summer we get temperatures of over 50 degrees Celsius and the lowest ever recorded is eight. Last year we had one day of rain 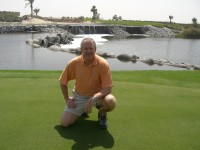 David, who has been a Course Manager for 25 years working in the U.S. and the Caribbean was brought out to Dubai for the construction and grow in of the course, which has been open for three years. "We irrigate pretty much every day," he continues. "We have our own weather station, which measures the wind speed, the dew point, the evaporation rate and sunlight intensity as well as the temperature and our irrigation is guided by these factors."

The Four Seasons uses treated effluent water, which can vary day-to-day and month-to-month. "It looks like tap water but you can smell the chlorine," David informs me. "The chemical and biological make-up of the water changes according to the treatment. The salt content can vary and the nutrient content varies, it depends who's spinning the dials."

In order to control the effect of this perpetually changing outside force, Brinkel has the soil and the water tested monthly, sending samples to an accredited laboratory in Scotland. Once a year he uses Analync in the U.S., the laboratory favoured by Floratine. Having used Floratine products in the past, here he is limited to those that have been passed by the Ministry of Environment and Water. B. Khateeb, Commercial Manager for Desert Turfcare LLC, Floratine's distributors in the UAE went through the necessary bureaucratic process.

David uses the soil amendment CalpHlex, which solubilises Calcium in the soil making it more readily available to the grass plant. CalpHlex also solubilises unwanted elements such as chloride and sodium, which allows David to flush them through the soil profile on a regular basis. The wetting agent and soil penetrant Pervade assists this process, while ProteSyn, rich in amino acids relieves stress by helping the photosynthesis process which converts energy into mature proteins. 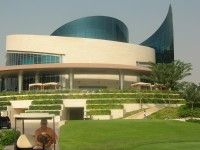 Astron encourages root development and stress tolerance, while Per4Max, a backbone maintenance product especially created for warm season grasses, also helps rooting and encourages plant density. "We use other products based on micro nutrients, occasionally an organic, granular fertiliser and according to the results of soil analysis we'll buy in Calcium products if we need to. We're looking for the key elements - Manganese, Magnesium, Calcium, Iron and Potassium," David explains.

The course sports 40 hectares of Paspalum turf, which doesn't, according to David Brinkel, need as much nitrogen as Bermuda grass, and is also more salt tolerant. "Paspalum will withstand being watered with sea water for short periods," he says. "We don't use sea water, but our treated effluent water has a variable salt content." David Snowden, Floratine's Technical Director adds that compared with Bermuda grass Paspalum is more vigorous, holds its colour better and is probably an easier grass to manage under these conditions. "Even though Paspalum is more salt tolerant, it is the salt residue, which builds up in the upper rootzone thus reducing the availability of the more beneficial nutrients that causes problems, so flushing is an ongoing procedure," he explains. 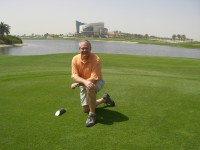 hosted the club's first concert. "It was called 'A Picnic In The Park with Celine Dion' and we had the stage on the driving range tee and 10,000 people on the grass," David Brinkel tells me. "This was our first concert and it won't be the last if our success continues to bring inquiries. We put covers down to protect the surface but it did become discoloured."

Somehow, however many concerts are planned I think that this Course Manager will take them in his stride. B. Khateeb, who has known David Brinkel since he came to Dubai, says that he is their company Guru. "We look on David as our consultant," he says. "We respect his knowledge." Asked if this is the most difficult course he has ever had to maintain, Brinkel replies that it is probably the easiest. "Other than the temperature, we control the environment," he explains. "We control the fertility and we control the water. We have few disease problems and no insects. With a climate like this we have few surprises."

For further information head to www.floratine.com