by Football Foundation
in Football and Synthetics
on 20 May 2018 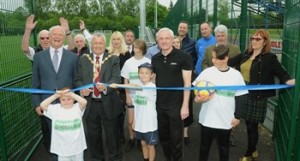 Mayor of Dudley, Cllr. David Tyler, was delighted to officially open Dudley Metropolitan Borough Council's brand new all-weather pitch. Their new facility was made possible thanks to investment from the Premier League & The FA Facilities Fund, which is delivered by the Football Foundation.

The funding enabled the Council to replace the sand-based artificial grass pitch (AGP) at the Dell Stadium with a third generation (3G) AGP. The state-of-the-art new playing surface, which joins the stadium's four existing grass pitches, changing pavilion and athletics track, will support the development of the grassroots game in Dudley.

The area already has a history of producing football talent. Sam Allardyce, who grew up in Dudley, started his career with Dudley Town FC in 1968 before being sold to Bolton Wanderers FC. Wolverhampton Wolves FC defender and current Captain, Danny Baath, is also a local man and previously played at the Dell Stadium in his youth.

Users set to benefit from the upgraded facility include the charity arm of Wolverhampton Wolves FC, the Wolves Community Trust, who will deliver outreach sessions on-site, Dudley Town FC, Gornal Colts FC and Stourbridge & District Youth Football League. Dudley College have been offered use of the new facility to support its own 3G AGP, also funded by the Premier League & The FA Facilities Fund and officially opened in December 2016.

In addition, the Birmingham FA plan to base part of its coach education programme on-site - helping to develop future coaches using the state-of-the-art surface. Dudley Council will also be working with Birmingham FA in developing a new disability team, to participate in the Ability Counts League.

Dudley MBC were awarded a £543,927 grant from the Premier League & The FA Facilities Fund towards the project. The club worked alongside the Football Foundation and the Birmingham FA to compile a five-year Football Development Plan, which is a vision of how sport will be played on site with an emphasis on increasing participation.

Thanks to the improved surface provided by the brand new 3G AGP, 32 teams are expected to be introduced across facility users. This will take the total number of teams using the site from eight to 40, and a 260% boost in football participation for those under the age of 14 is predicted as a result.

Of the new teams, it is planned that four will be girls' sides. This, along with an increase in mixed Mini-Soccer on-site, supports a rise in female football participation of 158%.