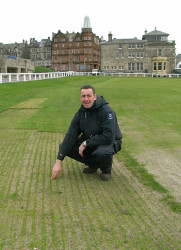 A grassed area at St Andrews Links damaged during the Alfred Dunhill Links Championship is well on its way to recovery, following a successful trial of Barenbrug's rapid turf repair mixture BAR 50 SOS.

The tournament took place in October of last year, with the Bruce Embankment putting green near the Old Course's first tee housing a tented village area, media centre and the tournament headquarters. Tents, Portacabins and artificial roadways cover the area for over a month, killing off the grass and giving rise to additional damage.

"When everything finally leaves the site a lot of the grass has died due to lack of sunlight, especially under the roadway," says Gordon McKie, course manager of the Old Course. "This is normally back to bare earth, which, along with the other areas where buggies and some vehicles have driven, is also compacted. Further damage is caused by contractors erecting and dismantling the tents, plus part of the area is worn thin by spectator traffic."

"I was looking for something to help repair the wear and tear caused by the Dunhill build, but because the tournament takes place in early October and the contractors leave the site mid-month this doesn't leave much time for germination in our climate. That's why the cool-soil germination attribute was a crucial factor in my decision to test SOS and I was pleasantly surprised at the results."

Gordon and his team started seeding in mid-October as soon as the area was cleared. "The product was disc seeded into the surface and within 10 days we had germination, which is great for the time of year," he continues. "The seeded areas started to fill in before the weather turned really cold; we have had the coldest winter here for over a decade. We expect to see the true benefits of the product when we get some spring growth as the sward thickens and fills out."

With The Open Championship returning to St Andrews in 2010, Gordon says he expects to use BAR 50 SOS in the future: "I am sure there will be a need for such a product in the same area and on our practice centre landing zone, where the tournament's main tented village is sited."

For further information on BAR 50 SOS, call Barenbrug on 01359 272000 or email info@baruk.co.uk to request a free product leaflet. Alternatively, the leaflet can be downloaded from www.barenbrug.co.uk.