by James Webber
in Football, Renovations & New Builds, and Cricket
on 01 Jun 2014 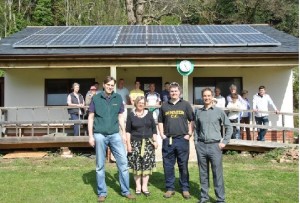 Dunster Football Club was reformed in 1983 and Dunster Cricket Club in 1998 with an under 13s team. The Football club constructed its own pavilion in 2001- 2004 to meet the required league standards as we had been unable to us the ground for the previous 3 seasons.

At the same time the cricket club extended the field to enable us to build a junior size cricket ground. Up until this time, the cricket team had played all their games away from home and had only a practice net at their home ground. In 2004, an adult cricket team was formed to play friendlies only due to the size of the ground not being big enough for league cricket.

The aim of the project was to double the size of the field and improve the facilities on offer. There were two stated main aims; to install a full size adult cricket pitch, including an artificial wicket which would be up to league standard and, secondly, turn the football club pitch through 90 degrees so we could watch from the pavilion and to improve the quality of the football ground. Anything else we could afford to do to improve the quality of our facilities at the same time would also be carried out.

In 2010 we installed photovoltaic panels to the roof of or pavilion. This was with the help of an interest free loan from the Exmoor National Park Carbon Neutral Project. This will give us an extra income for a minimum of 15 years and reduced electricity bills for the duration of the panels 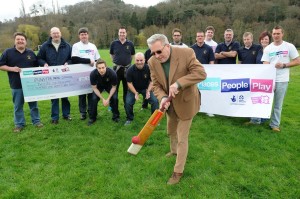 A lot of the project was carried out through Dunster parish council and DAVSCA a committee made up of members of the football club, cricket club and the local school. We acquired the extra land finalizing in 2009 and set about specifications.

During this process we heard about a new funding project called "inspired facilities places people play" from Sport England this was part of the legacy funding from the 2012 Olympics. This allowed us the chance to apply for a greater amount of money and build even better facilities.

The project was priced at £48,000 with an application to Sport England for £26,000 and with support from Dunster Parish Council for £13,000, £5,000 from a local trust the rest was money raised from fund raising and donations from club members and local residents. This was successful in early 2012 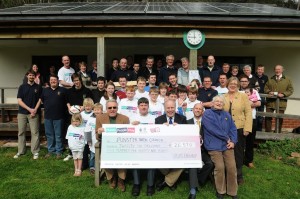 The first work to commence was the removal of the Hawthorn hedge (which had cost the football club many balls over the years) to enable the field to become one large field. A sign of delays to come were that, during this process, the digger caught on fire.

Obviously everybody remembers the summer of 2012 for being the wettest for 100 years which is the perfect weather for carrying out work outdoors involving soil and machinery. Nevertheless, work started as soon as we could and, in April and May, a local contractor ploughed and levelled the outfield to allow installation of the grass and artificial wickets. 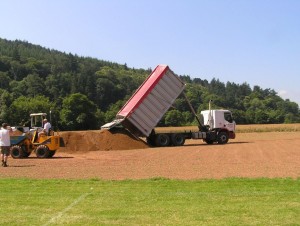 nce we had finished the specification for the wicket, we decided to carry out the construction of the wicket ourselves, mainly to save money to allow it to be spent on other parts of the project. With our fingers crossed, and keeping an eye on the weather forecast hoping for some dry weather, we booked in delivery of the loam for Wednesday 25th July.

Luckily for us, this turned out to be the driest and hottest week of the whole year. This allowed us to carry out all the work exactly as we had hoped and had the added bonus that the delivery lorries were able to drive across the ground and deliver the loam right on the edge of the new square.

On the down side of it being so warm it made it very tiring to move 48 tonnes of loam and, unfortunately, we didn't get it all finished in the two days we had originally allowed, which left us with around 8 tonnes in a pile to shift at a later date.

With hindsight, a third day would have allowed us to get the square finished and seeded and saved a lot of delays and issues later on in the project. Most of the loam was moved onto the square by September but some was put into storage and not laid until the following spring. 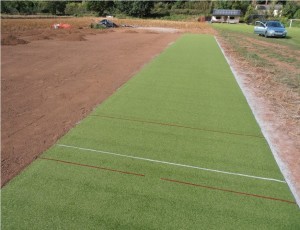 Due to the delay in the laying the square we missed our original booking date for the artificial wicket, which also meant the work to finish the outfield was pushed back. Due to the wet weather, the ground wasn't dry enough until September to allow the artificial wicket to be installed; this was done on September 21st. As can be seen in the pictures the outfield had become quite overgrown by this stage and required further work to get it levelled and ready to be sown.

The work on the outfield was carried out in early October and, although conditions weren't ideal, the work was done and seeded on Sunday 7th October. Thankfully, the contractor did everything possible to get the work done, which turned out to be a very good decision as it rained for the next three weeks! 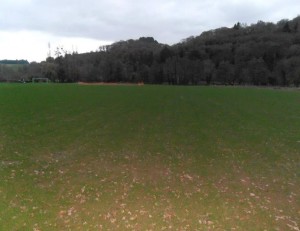 The weather was very different at the start of 2013 compared to the previous year with a very cold and dry spell affecting the grass seed growing. The work on the square was eventually finished in 2013.

This involved the laying of the last of the loam once we had sprayed the square to kill any weeds which had grown over the winter. We were then in a position to seed the square, the same one we had started to lay in July the previous year.

The square was first sown in early March, which was followed by a very cold and frosty fortnight, so we took the decision to reseed at the start of April once conditions had warmed up a bit; this then brought different problems. Once the weather had warmed up, it was very dry, so we ended covering the square with fleece for six weeks to help protect the young grass and also to help hold moisture in.

Due to growing in a nice warm and dry summer it meant we had the sprinklers on almost continuously for six months, which resulted in a large water bill, but the square was finally finished.

During the summer of 2013 we had the disabled access ramp constructed; this was to replace the temporary wooden ramp which had lasted for ten years since the pavilion was first built. This allowed work to start on the external disabled toilet which was built and finished over the winter in time for the new cricket season. 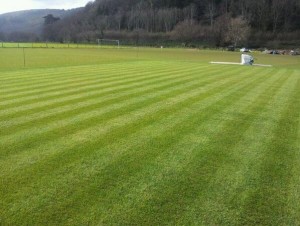 The adult football pitch was repositioned in time for the start 2013/14 season which would be the first sport to take place on the newly extended ground.

The grass cricket square had its first autumn renovation carried out in September which, in line with the rest of the project, wasn't finished until October due to machinery breaking down and, of course, the weather. The work was completed on the same day as Angus Fraser visited for a Sportsman Dinner.

During the winter of 2013/14, work was carried out on the groundsman's shed for our new mower to allow us to collect rain water for use on the ground, allowing us to be more environmentally friendly across the whole site - this is also in conjunction with a reduction in the artificial fertilisers we use and changes in the pavilion.

Finally, the big day arrived where the majority of the work had been finished and we were able to host our first cricket match on the new ground. It was decided that our annual memorial match would be brought forward and be the first game on the new pitch. Sunday 4th May 2014 was a fantastic day the Football Club had made it to their first cup final since being reformed and this was followed by the cricket match, all of which took part in glorious sunshine.