How long have we been trying to get the powers-that-be to allow English groundsmen to put white marks on the six yard line and penalty area to stop goalkeepers scraping lines?

We keep being told that no additional lines are allowed under the current Laws of the Game. Bully for the English - we always abide by the rules of the game!

However, it seems that elsewhere in Europe a more practical, common sense approach is being taken. These images were taken recently by one of our senior football groundsmen at the home of Feyenoord in Holland. 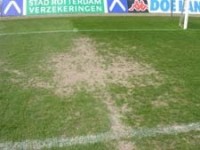 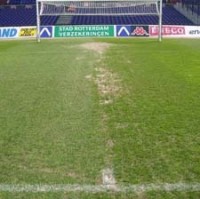 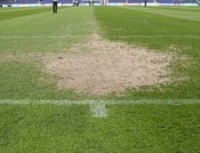 The Dutch FA recognize that there is a problem with 'scrapers' and turn a blind eye to the white lines that the groundsmen put there.

Sometimes it takes a bit of courage to stick your neck out. In Holland they are clearly leading the way in this department.