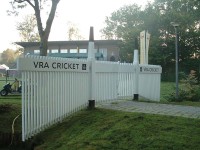 The governing body of cricket in the Netherlands, the KNCB, has initiated a three year programme to promote natural grass pitches in the country. Overseeing much of this work is Head Groundsman Andy Clarke
Laurence Gale MSc reports

The governing body of cricket in the Netherlands, the Koninklijke Nederlandse Cricket Board (KNCB), has initiated a three-year programme to promote natural grass pitches in the country. Working with the ICC, ECB and IOG, their aim is to achieve ECB/IOG Performance Quality Assessments standards.

There are, perhaps surprisingly, seventy nine clubs that are registered with the KNCB, most of which play on artificial surfaces. Currently, only four clubs have natural grass facilities and just two that can accommodate international matches. However, this number will increase through the KNCB initiative. Andy was appointed in March 2008 to oversee the three year programme which includes staff training along with machinery and equipment acquisitions.

Year 1 - 2008
a) Acquisition of specialised machinery with emphasis on post season renovation and winter aeration
b) Head Groundsman, and those in a supervisory role, to attend a course of instruction at intermediate level
c) Formation of a pitch management group
d) Construction of one new turf square

Year 2 - 2009
a) Conduct three workshops at foundation level
b) Head Groundsman, and those in a supervisory role, to attend a course of instruction at advanced level
c) Pitch management group to expand and become Netherlands branch of ECB/IOG
d) Introduce a mentoring/work experience scheme
e) Construction of one new turf square

Year 3 - 2010
a) Continue to expand and develop education and training programme
b) All turf facilities to have achieved the basic minimum standard under the ECB/IOG Performance Quality Assessments, and those clubs hosting representative games of more than one day's duration to have attained the intermediate standard
c) Appointment of a Dutch National as an ECB/KNCB pitch adviser
d) Construction of one new turf square Andy is based at the VRA club at Amstelveen, in the Metropolitan area of Amsterdam. The town is named after the River Amstel and not the beer!
VRA were chosen for the improvement programme as they are just one of two clubs able to accommodate international matches, and one of just four with grass tracks.

VRA was founded in 1914 after the cricketing merger of the clubs Volharding (1889), R.A.P (1887) and Amstels (1885). In the beginning the Volharding Rap Amstels played visiting English teams in such locations as Vondelpark, Museumplein and the Olympic Stadium in Amsterdam. In 1939 VRA moved to the Amsterdam Bos (forest) and started playing where the Amsterdam hockey club now stands. In 1988 the club shifted a little more inside the Bos, to its picturesque location of today.

VRA has had a long history of success in both men's and women's cricket and has produced many Dutch internationals, some of whom played in the 2003 World Cup in South Africa. The tradition of cricket in Amsterdam is strong and is very visible when visiting the clubhouse, with many trophies and photographs on display.

The club's square currently accommodates ten playing strips that were constructed a number of years ago in two phases, importing Ongar loam laid to a depth of 125mm over local sandy soils. Andy first visited the club in January this year to assess the situation and recommend what equipment and resources would be needed. Not a lot had been done to the square in recent years, and it was in a poor condition, with little more than 30% grass cover, of which 90% of this was annual meadow grass. Levels were not too brilliant and there were some corrugations across the square.

The club did have their own Autoroller, Dennis cassette system and other bits of kit. However, Andy made arrangements for additional equipment, including a Sisis Variseeder, Sisis Combirake and a Protea mower.

Andy's first objective was to rectify the corrugations by implementing a programme of angled rolling. This was followed by summer renovations after each strip had been used, introducing seed into the square to increase sward density and establish better grasses. This involved wetting down the strip after play, lightly scarifying, overseeding with Rigby Taylors R9 at 35 grammes per square metre and applying a feeding programme that was based around a three-week application of amino acids and root enhancers.

Once the grass had established Andy applied some 5:5:10 NPK fertiliser to maintain colour and vigour. The results were very good with over 80% grass cover achieved on the square by early June. The height of cut on the square was kept at 20mm. He implemented a fourteen day programme which began with the watering of the strip to a depth 100mm, covering for up to thirty six hours and allowing it to dry out slowly. This was followed by a programme of cutting and brushing, plus rolling in half hour sessions, for the first three days of the preparation cycle.
Ten days before a game the rolling time was increased to one hour, split into three twenty minute sessions. Total rolling time for each pitch was around six hours.

The final height of cut was 4mm using the Protea mower. Andy could go no lower due to the uneven levels of the square and the risk of scalping. The pitches were then marked up ready for play.

By mid June the condition of the strips had improved greatly and offered some consistent bounce and pace, although they were a bit green in colour. Even so, the international games played throughout July and August scored good marks from the umpires.

By the end of the season, seventy games had been played on the square, a great achievement on a ten strip square. The main aim was to get rid of the Annual Meadow Grass, renovate the surface, restore levels and overseed.

It was a case of continuous cutting, brushing and verticutting until the surface was clean. The square was scarified in three passes at 20 degree angles using a tractor mounted Koro collector set to a depth of 8mm using 2mm wide blades.

A bag and half of Rigby Taylor R9 was applied at 40g/m2 and brushed in. Then the surface was dampened down ready for the variseeder to run over it in several directions.

The square was heavily topdressed, with twelve bags of Ongar Loam used on each strip to rectify the poor levels. Germination sheets were used and the seed was up within ten days.

The grass was allowed to establish and reach the two leaf stage before getting its first cut using pedestrian rotary mowers. Height of cut was then reduced to 25mm for the winter. A preventative fungicide was applied to control disease along with a couple of applications of autumn/winter feeds that included a dose of iron sulphate.
Andy is contracted to return to the club every third week throughout the winter period (October-March) to keep an eye on the square and to carry out the relevant winter maintenance regimes, including an aeration programme.

The VRA club have been very impressed with the improvements Andy has achieved in his first year as Head Groundsman, and are now keen to further improve the quality and standard of their pitches and practice net facilities.

So, if all things work out, Andy will be back next year to take the club on to the next stage of the development plan whilst, at the same time, encouraging other Dutch clubs to follow suit.