by External source
in Synthetics and Football
on 16 Feb 2017

0 Dutch university research shows: use of rubber infill for artificial grass should be avoided 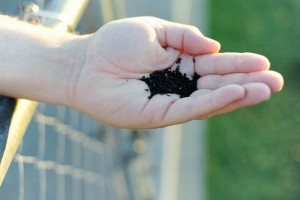 As opposed to research outcomes recently published by the RIVM, VU University Amsterdam (VU) scientists reached the conclusion that rubber granules in fact release chemicals which may cause harmful effects in humans. Exclusively for ZEMBLA, VU scientists present the results of studies on juvenile zebrafish and zebrafish embryos exposed to water previously loaded with rubber granules: the embryos died, while the fishes showed evidence of behavioural changes. Jacob de Boer, research leader and professor of Environmental Chemistry and Toxicology, argues that their test outcomes are at odds with the RIVM findings.

At the end of last year, the RIVM had reached the conclusion that it was safe to play sport on rubber infill surfaces. De Boer: "According to the RIVM, the chemicals are embedded in the granules. This is not what we found. Chemicals are in fact released, and that is an essential finding. So if they say: we can close the book on this matter because the PAHs will never be released, they are cutting corners."

Following the outcomes of the VU research, professor De Boer advised against doing sports on artificial grass sports fields with rubber infill: "I wouldn't do it myself. I would be very careful, simply because of what we found here." When asked, De Boer replied he would not allow his children to play on rubber infill.

According to De Boer, the outcomes of the zebrafish study are a key indicator for potential health effects in humans, but further study will be needed to provide more details: "We don't know what levels we are talking about, or what chemicals are involved."

After the first broadcast of ZEMBLA, last October, the VU launched a similar study as the RIVM to investigate the potential health hazards associated with rubber infill. The VU University scientists took samples from eight football pitches. As a next step, they let the rubber granules settle in water for seven days for leaching. To the clear water extract obtained after centrifuging they exposed both fertilised zebrafish eggs (embryos) and juvenile zebrafish.

EMBRYOS DIED
Forty zebrafish embryos were exposed to water for 24 hours. To the surprise of the investigators, all 40 embryos died within five days.

Professor De Boer: "That was a remarkable finding of course. As a rule, we conduct these studies to look for abnormal findings. If they (the fish eggs, ed.) fail to develop at all, you cannot help but feel something is very wrong here."

The research conducted by the VU's Health & Environment department also brought to light that juvenile fish (five days old larvae) exposed to water previously loaded with rubber granules showed hyperactive behaviour. The juvenile fish in the control group, which were swimming in normal water, did not show evidence of such behaviour. 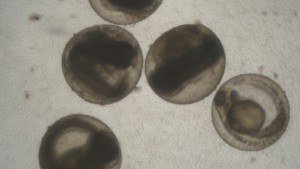 "You can imagine that it is a real concern if a particular chemical affects the brain, because in humans this may well cause epilepsy, ADHD or autism," says VU toxicologist Jessica Legradi, who is a member of the research team. "Zebrafish are also used to study disorders such as autism and ADHD. And they are used in cancer research as well, because cancer in zebrafish develops in a similar way as in humans."

She adds that more studies are required to determine if the chemicals inside the rubber infill can actually cause health effects in humans. "That is a conclusion we cannot yet reach, but the findings are definitely alarming," says Legradi in the ZEMBLA documentary.

Professor De Boer stresses the fact that, besides carcinogenic PAHs, other chemicals are present in the rubber granules. "Organic compounds, not metals. They can also produce toxic effects. We still need to map this," says De Boer. Right now, it cannot yet be determined which chemical or combination of chemicals contained in the rubber infill was responsible for the serious effects seen in the zebrafish.

Professor De Boer's Health & Environment department specialises in testing toxic compounds in zebrafish and zebrafish embryos. All over the world, zebrafish are used as laboratory animals in scientific studies examining health effects in humans as a result of exposure to chemical compounds.

CHEMICALS ARE RELEASED
In late December, the RIVM concluded that the health risks associated with these surfaces are 'virtually negligible' and that sporting on artificial grass with rubber infill would be 'justified'. According to the RIVM, various compounds, including polycyclic aromatic carbon hydrates (PAHs) and metals, 'are released from the granules at very low levels (..), because these chemicals are more or less embedded in the granules'.

Professor De Boer challenges this conclusion, however: "Of course athletes will be exposed to them, because these are hydrous extractions .(..) This is what you see happen when mimicking an ordinary rain shower, or bringing it into contact with water in some other way. It will be released then."

REACTION FROM RIVM
In the ZEMBLA documentary, RIVM director Els van Schie comments that the VU study outcomes will not lead her to change the RIVM conclusions that doing sports on rubber infill is 'safe', because she sees "no new indications" that the findings could be "extrapolated to human health risks". Van Schie feels that no conclusions can be drawn from the VU zebrafish study.

PRECAUTIONARY PRINCIPLE
In addition to professor Jacob de Boer of the VU, two more professors of Toxicology argue in favour of the precautionary principle and of refraining from doing sports on rubber infill surfaces. Both professors, Martin van den Berg and Jos Kleinjans of the universities of Utrecht and Maastricht, respectively, were members of the scientific sounding board group that guided the RIVM study.

In the ZEMBLA documentary, Kleinjans says he would never allow his grandson to play on artificial grass with rubber infill. The finding that a small portion of the carcinogenic PAHs is in fact released into the stomach, as the RIVM study shows, is reason enough not to play on rubber infill, as a precautionary measure: "We all aim to limit exposure to carcinogenic chemicals as much as possible. So I would say: if we find a source, especially one that children are exposed to, the first thing we should want to do is close that source."

Van den Berg: "More than a decade ago, the Netherlands decided to embrace the precautionary principle. I feel that the government should continue to enforce it, even though it may be less convenient socio-economically. So I would rather not see children play on rubber granule fields."

You can read the original article from ZEMBLA HERE