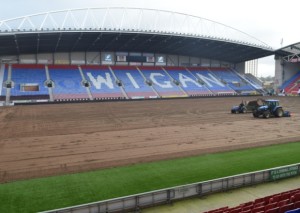 Wigan Athletic confirmed the move this morning with work set to be complete ahead of Saturday's clash with Oldham.

The pitch has got considerably worse over the past few weeks with it cuttng up badly during Latics' game with Port Vale before matters were made worse during Warriors' game with Catalans in rain-lashed conditions last weekend.

The club said the decision to relay the pitch early - it's usually a move made over the summer - came after "a record-breaking winter in terms of rainfall", adding: "several Latics matches have already been played out in torrential conditions during December and January, leading to the playing surface deteriorating.

"The problem was further exacerbated last Friday evening following Wigan Warriors' Super League match versus Catalan Dragons, which took place on another evening of persistent heavy rainfall, and the decision was taken immediately after the match to carry out the work."

Latics Chief Executive Jonathan Jackson said: "We have had unprecedented weather conditions this winter and the pitch has suffered as a result. We had to act quickly to give Gary Caldwell and the players the best possible surface to play on for the remainder of the season.

"Ideally, Head Groundsman Ian Forshaw and our sports turf consultants would need more time than a week to prepare a new playing surface, but they will be working through the night this week to get the pitch ready for Saturday.

"The pitch has deteriorated significantly since November but we were anticipating that it would be robust enough to last until the end of the season. A number of other Premier League and Football League clubs have also relayed new pitches in the past month and so this is not a unique situation.

For the full article, visit www.wigantoday.net.