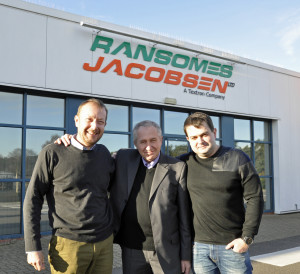 Ransomes Mastiffs are used to prepare the pitch at the Valeriy Lobanovskyi stadium, named after the club's legendary coach, who had two highly successful spells from 1973-1983 and again from 1996 until his untimely death in 2002.

Speaking through an interpreter, Anatoli Kolosha said, "The Ransomes Mastiff is an excellent mower; it produces an great finish, has very good grass collection, can roll the surface due to its significant weight and has proved to be extremely reliable."

In his role as Technical Director, Anatoli is responsible for the club's infrastructure, which includes the buildings, the stadium pitch, the Training Centre and the Youth Academy. In addition to the stadium pitch, there are 6 full-size grass pitches, two synthetic pitches at the training centre, and another synthetic pitch at the Academy. He is also responsible for eight staff at the Training Centre, four at the stadium and four at the academy.

"Our association with Ransomes goes back 20 years," he said. "I first contacted the British Embassy in Kiev in the early 1990s and they put me in contact with Ransomes. I received a very timely reply and their sales manager, Scott Forrest and two colleagues came out to meet me and the Vasily Barbichuk, the Club's General Secretary."

"The rest is history. We took delivery of our first shipment in 1995 and have the fleet refreshed every 6-7 years. Scott personally recommended the Fairway 250 for our training pitches and 15 years on it is still performing very well. We have 5 hectares at the training centre and 2.5 hectares at the Academy, so it works hard."

Anatoli and Alan Ferguson, the English Football Association's Grounds Director at St Georges Park and now responsible for Wembley stadium, have become very good friends over the years. During an early visit to Ransomes, they were introduced when Alan was head groundsman at Ipswich Town. A reciprocal visit was arranged in Kiev and Alan has provided advice not only to Anatoli, but also Ukraine Football Federation.

"I have great respect for Alan and look upon him as a good friend," Anatoli concluded. "During those early visits he offered excellent advice on all aspects of pitch maintenance and we have exchanged best practice on numerous occasions. I would like to think that I am responsible for the best playing surface in Ukraine and Alan is responsible for the best pitch in England!"