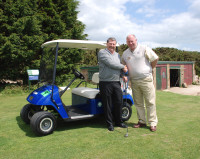 E-Z-GO, the golf car manufacturer with European distribution based at Ransomes Jacobsen's head office in Ipswich, has donated an electric golf car to Ventnor Golf Club on the Isle of Wight following an appeal to help get a disadvantaged golfer back playing the sport he loves.

Peter McNamara, 53, a passionate golfer for more than 20 years, was forced to quit the sport following surgery to remove the lower part of his left leg six years ago. Peter, who underwent 22 operations on his leg, developed cancer at the point of an old fracture sustained while playing football. He was diagnosed just three months after moving to the island with his wife, Rita, to run Ventnor Social Club.

Barbara Holmes, who runs the Diabetes UK Charity Shop in Ventnor, became aware of his plight and began a fundraising campaign to purchase a buggy that could be used by Peter and other disabled golfers to help them get round the hilly course, which overlooks the English Channel on the south coast of the island.

As the fund grew she contacted the Ipswich office of E-Z-GO to enquire about purchasing an electric buggy and was delighted when the company immediately offered to provide one, free of charge.

Chris Buckle, E-Z-GO's Regional Manager for the South of England delivered the buggy recently to a very surprised Peter McNamara, who thought he was invited to the club to take part in a further fundraising event.

"I just can't believe it; it's absolutely wonderful," said an emotional Peter, who lives in Ventnor. "It's not just for me; it will enable other less mobile golfers to come and play here, which is brilliant. It will make a huge difference to my life. I can't thank you enough."

Barbara Holmes added,
"This was a wonderful gesture from E-Z-GO and the smile on Peter's face says more than a thousand words. He is absolutely dumbfounded at the kindness. We will continue our fundraising and purchase a second buggy in the near future. If it brings half as much joy as this one, then it will certainly be worth it!" 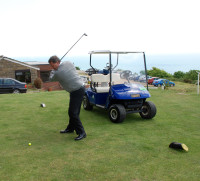 Ventnor Golf Club is the oldest on the Isle of Wight and was founded in 1892. The downland course has a cliff-top setting with some of the finest views on the Island. It is unusual in that it is a 12-hole course, alternative tee boxes on several holes providing variation on the back nine.

Over the next four years the club will develop the course to 18 holes and are seeking planning permission for 15 golf holiday log cabins and three 30-metre wind turbines. If approved, the power from the turbines will provide all the electricity needs for the club and the surplus sold back to one of the major power utilities.

Golf Club Manager Stewart Blackmore said, "The finance is in place to carry through the vision of having one of the finest golf facilities on the Island, and the south. We will be at the forefront of the Eco-Island vision outlined by the Isle of Wight Council and will be the first club in the UK to be totally 'Green' when the development is completed."